This year is on track to become the hottest year on record, with global temperatures measuring 1.2 degrees Celsius (2.2 F) above pre-industrial levels, 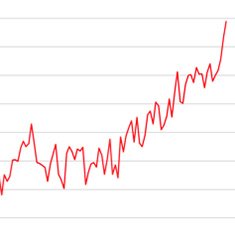 Global temperature rise over the last century.
according to the World Meteorological Organization (WMO). Global temperatures this year will likely beat the previous record, 2015, by 0.2 degrees Celsius, setting a new high for the third year in a row. “Another year, another record,” WMO Secretary-General Petteri Taalas said in a statement released at the UN Climate Change Conference in Marrakech. By the end of 2016, 16 out of 17 hottest years on record will have been in this century, with 1998 as the outlier, the WMO said. Warming in Arctic regions has been particularly extreme this year, with temperatures in parts of Arctic Russia soaring to 6 degrees C to 7 degrees C (10.8-12.6 degrees F) above the long-term average. Many others parts of the Arctic have experienced temperatures 3 degrees C above average.