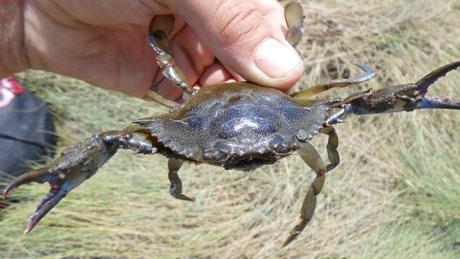 Blue crab caught 80 miles north of its historic range.
a migration that may be driven by climate change, according to ecologist David Johnson of the Marine Biological Laboratory. Although the historic northern limit of the blue crab is Cape Cod, Massachusetts, scientists and resource managers have observed blue crabs as far north as northern Maine and Nova Scotia, Canada. Johnson says that warmer ocean temperatures in 2012 and 2013, which were 1.3 degrees C higher than the previous decade’s average, allowed the crabs to move north. In the 1950s, blue crabs were observed in the gulf during a time of warmer waters, Johnson notes in the Journal of Crustacean Biology, but once the gulf returned to average temperatures, the crabs disappeared. He added that “recent observations of blue crabs may be a crystal ball into the future ecology of the Gulf of Maine.”