Iberian Lynx Is Back from Brink, But Still Faces Major Challenges

Efforts to help restore the endangered population of the Iberian lynx are showing signs of success. Chief among them are the captive breeding program, which has 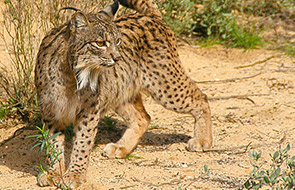 An Iberian lynx in the wild
helped increase the animal’s numbers from a critical low of less than 100 individuals to 160 today. The elegant 25-pound predator, a close relative of the American bobcat, still faces a number of challenges including habitat loss of 95 percent, a high vehicular mortality rate, and a genetic exchange stymied by a lack of wildlife corridors. It remains uncertain, as well, if the lynx can acclimate quickly enough to life at higher, cooler climes, where its main prey, the European rabbit, is already beginning to relocate due to climate change.
Read more.