Fracking May Induce Quakes at Greater Distance than Previously Thought

Hydraulic fracturing and underground wastewater disposal may trigger earthquakes at tens of kilometers from the wells in which water is injected — a greater range than previously thought, according to new research from seismologists. In one case, an earthquake 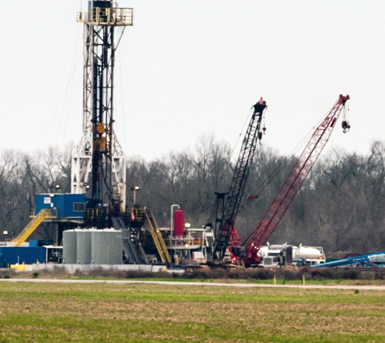 Fracking injection well in Louisiana
swarm in Oklahoma has been linked to a cluster of fracking injection wells up to 50 kilometers (31 miles) away, Cornell University researchers report. So-called “induced seismicity” — when human activity causes tremors in the earth’s crust — is gaining attention as reports of earthquakes within the central and eastern U.S. have increased dramatically over the past few years. The rise coincides with increased hydraulic fracturing for oil and natural gas, and the injection of wastewater in deep disposal wells in many locations, including Colorado, Oklahoma, and Texas. According to the U.S. Geological Survey (USGS), an average rate of 100 earthquakes per year above a magnitude 3.0 occurred in the three years from 2010-2012, compared with an average rate of 21 events per year observed from 1967-2000.