Kenyan authorities are set to burn 105 tons of ivory confiscated from illegally killed elephants this weekend to bring attention to the country’s growing poaching problem. 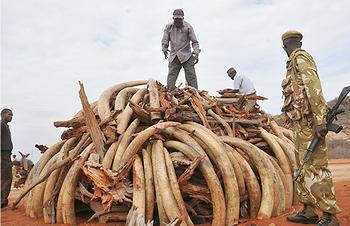 Kenya Wildlife Service
Kenya conducted its first ivory burn in 1989 after elephant populations in the country dropped 90 percent in 15 years, and it has continued to do such burns periodically since. But the systematic cutting back of an international ban on the sale of ivory over the last 15 years has led to the reemergence of large-scale poaching in Africa. Approximately 30,000 to 50,000 elephants were killed on the continent between 2008 and 2013. Soon after announcing the ivory burn, Kenya’s president, Uhuru Kenyatta, announced his nation would seek a total ban on elephant ivory during a wildlife trade meeting later this year. “We will not be the Africans who stood by as we lost our elephants,” he said.