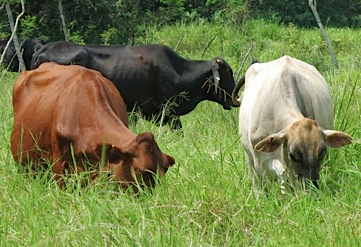 Beef cattle graze in Colombia
1800 — due to growing purchasing power, urbanization, and changing diets, according to a new report from the Worldwatch Institute. Consumers in industrial countries still eat much larger quantities of meat (75.9 kilograms per person) than those in developing nations (33.7 kilograms), though that gap is beginning to close, the report says. Nearly 70 percent of the planet’s agricultural land and freshwater is used for livestock, with additional land and water used to grow grains for livestock feed. Beef production alone uses about three-fifths of global farmland and yields less than 5 percent of the world’s protein, according to the report. Sustainable agricultural practices such as feeding livestock with grasses instead of grains and using natural fertilizers could reduce these impacts, the report notes, but alternative dietary choices hold the most immediate promise for reducing the environmental footprint of meat production.