Conservationists and scientists in the U.S. and Europe are working to re-establish declining or endangered freshwater mussel 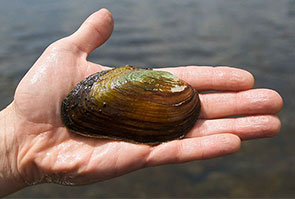 An Eastern elliptio mussel
populations so these mollusks can use their natural filtration abilities to clean up pollution in waterways. One such program has been established on the U.S.’s Delaware River, where environmentalists and biologists are reseeding mussel populations in the more polluted sections of the river and in tributary streams. Water companies have expressed interest in these programs in the hope that large populations of freshwater mussels might eventually relieve the companies of some of the burden and expense of mechanical water filtration.
Read the article.