Paris COP21: To Save Forests, A Combination of Carrots and Sticks

Forests must be saved and restored if the world community hopes to slow global warming. That’s a given at the Paris climate 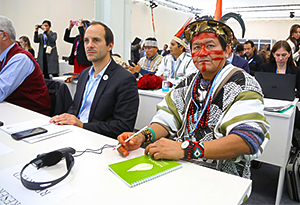 Indigenous leaders at a forestry session in Paris.
conference. But how? It’s a tough issue for many environment ministers, who know that back home their agriculture, mining, and even forestry ministers have other plans for forest lands. In nations such as Peru and Indonesia, the gap between aspirations for slowing deforestation and the reality on the ground is huge. How to close that gap is a major topic of discussion in Paris, with countries, business groups, and conservationists proposing a combination of carrots and sticks to spur reform. And advocates say that returning many forests to indigenous groups is a key part of any solution.
Read more.