More than 2,000 New Plant Species Are Found Every Year

There are currently 391,000 plant species known to science—and another 2,000 are being discovered every year, according to a new report from the U.K.’s Royal Botanic Gardens, Kew. 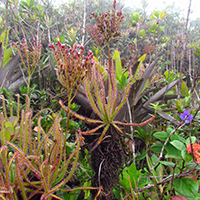 Paulo Gonella
Last year’s new discoveries included a nearly five-foot tall carnivorous plant first identified on Facebook, a 105-ton tree in West Africa, and 90 new species of Begonia flowers. Brazil, Australia, and China were hotspots for species discovery. The State of the World’s Plants report did find, however, that one-fifth of the world’s plant species are at risk of extinction from habitat loss, disease, invasive species, and climate change. “Plants are absolutely fundamental to humankind,” Kathy Willis, director of science at Kew, told The Guardian. “Plants provide us with everything — food, fuel, medicines, timber, and they are incredibly important for our climate regulation. We are facing some devastating realities if we do not take stock and re-examine our priorities and efforts.”