The U.S. installed more than 13 gigawatts of new wind energy capacity in 2012, nearly doubling the amount of wind power installations added in 2011 and pushing the 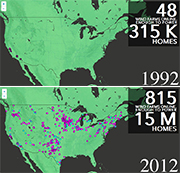 Department of Energy
Wind energy projects in the U.S., 1992-2012
total capacity connected to the grid nationally to 60 gigawatts, according to a new report from the U.S. Department of Energy (DOE). That capacity represents enough electricity to power 15 million homes annually, officials say, adding that for the first time wind energy has become the top source of new electricity generation in the U.S. To coincide with the report, the DOE published an interactive map illustrating the steep growth in wind projects nationwide, particularly in the last decade. The map shows that until the mid-1990s, only a few dozen wind projects existed, all in California. But by 2000, projects started appearing in states nationwide, particularly in Texas and Iowa. In the past two decades the number of wind energy projects has increased from 49 to 815, the DOE said.