UNESCO has launched a campaign to include deep-sea ecosystems in its list of World Heritage Sites. Previously, only sites within national jurisdiction, 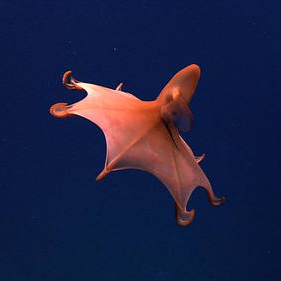 A Dumbo octopus in the deep sea.
either on land or close to shore, could be given heritage status and UNESCO protection. But ecosystems within the open ocean, which covers more than half the planet, deserve similar classification, UNESCO says. In a new report, World Heritage in the High Seas: An Idea Whose Time Has Come, the organization presents five biodiversity hotspots—many of which are at risk from climate change, pollution, over-fishing, and deep-sea mining—worthy of recognition: the Costa Rica Thermal Dome; the White Shark CafÃ©, a shark gathering point in the Pacific Ocean; the Sargasso Sea; the Lost City Hydrothermal Field, with its 200-foot carbonate towers, in the Atlantic Ocean; and the Atlantis Bank, a sunken fossil island, in the Indian Ocean.