On the day that the Indian Ocean tsunami hit his village a decade ago, fisherman Hajamuddin was at sea. It was the safest place to be. When he returned to his home port, the fishing community of Gle Jong on the west coast of Sumatra, he found it obliterated by the giant wave and under three meters of water. What was once home to 800 people was now a new bay. “My family was all gone,” Hajamuddin says.

‘When the floods come again, the mangroves can save us,’ says a surviving Indonesian villager.

Just seven people survived the ten-meter wave that hurtled up the beach at Gle Jong that morning. The lucky few were collecting firewood and had time to rush up the steps of the village’s only high point, its cemetery. Today, as the tenth anniversary of the disaster approaches, the village is on the mend. A combination of returnees, new residents like Hajamuddin’s new wife, and a baby boom have brought the numbers back to 130. They live in newly built homes set back from the coast.

It is a remarkable human recovery. But a closer look reveals something else just as remarkable. A few yards inland from the new post-tsunami coastline, on land left waterlogged by the killer wave, the survivors in this community have planted 70,000 mangrove trees. The trees are growing well, and villagers see them as protection against any future invasion from the ocean. “When the floods come again, the mangroves can save us,” says Hajamuddin. 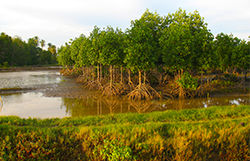 The coastline of Aceh, the northernmost province of Indonesian Sumatra, took the brunt of the tsunami on December 26, 2004. Its waters ran red with blood as an estimated 167,000 Indonesians perished, nearly all of them from Aceh. Whole villages disappeared.
But the color the survivors want to show you now is green. An ingenious microcredit project funded by the Dutch branch of the humanitarian charity Oxfam Novib, and carried out with local partners by the Netherlands-based NGO Wetlands International, has been helping villagers plant mangroves and other trees. They will revive nature, improve local livelihoods, and — perhaps most important of all — protect against cyclones, coastal erosion, and any future killer waves.

In a tour of the province last month, I went to villages where virtually the only survivors were those who were away from home on the day the disaster struck. In these tightly knit communities, especially on the province’s remote western coast, many people have no relatives left.

In Gle Jong, an old fisherman who is now a janitor at the life-saving cemetery quietly wiped a tear as he pointed out where the sea below us had obliterated his village. “I am the only survivor of my family,” he said. Later, as I drank coffee in a cafe just 10 meters from the new shoreline, Hajamuddin admitted, “People here are still traumatized by the tsunami. The faithful lost their faith.” Schoolteachers told me that their students still fear even a sight of the ocean or the sound of wind.

The 5 million euro Green Coast project has given the people of Gle Jong something to believe in for the future. The trees are bringing a return of nature. Birds flock in the cool new forests. The ponds around the mangroves have become feeding areas for shrimp and crabs. “We thought we had lost the green turtles from the beach, but a few are now returning,” said Hajamuddin.

The 2004 tsunami was caused by an earthquake in the seabed beneath the Indian Ocean, off the western shore of Sumatra, the westernmost island of Indonesia. The geological movement created a series of giant waves that battered coasts for thousands of miles. Of the 230,000 people thought to have died, almost three-quarters were in Aceh, mostly on its west coast.

The project provides incentives for communities to take ownership of the trees and to protect them.

As the tidal wave dissipated, some 60,000 hectares of rice fields were left flooded with salt water and piled with sand. In many places, the water never retreated. Along most of western Aceh, the earthquake caused land subsidence that left the new coastline 200 to 400 meters further inland than before. Rice paddies, coconut groves, mangroves, and entire villages became part of the seabed.

Mangroves grow in partially flooded sediments along thousands of kilometers of the world’s tropical coastlines. They nurture fish and protect against coastal erosion by accumulating sediment and absorbing the energy of waves and winds. They also store carbon and clean up pollution. And yet mangroves worldwide are being lost at a rate of around 1 percent a year — several times faster than the rate of deforestation on land. The coastline of Aceh has been no exception. The prime reason, as elsewhere, has been to create space in intertidal areas for lucrative aquaculture shrimp ponds.

Most of the mangrove swamps that remained around the shores of Aceh were destroyed or badly damaged by the 2004 tsunami. An estimated 30,000 hectares of mangroves succumbed, but in the process they captured and dissipated some of the tsunami’s energy and undoubtedly saved lives by providing protection for people living behind them. Those without mangrove swamps suffered worst.

So ecological rehabilitation became a priority. But first efforts often foundered, with only a fraction of plants surviving, according to a 2006 study by Wetland International’s Indonesian director Nyoman Suryadiputra, my host in Aceh last month.

One reason was that busy and distracted villagers were paid for planting seedlings rather than for nurturing them thereafter. Many swiftly succumbed to the waves or to the wild boar, which came down from the hills after the tsunami to root around in the depopulated landscape. Others never stood a chance. They were planted on the huge amounts of sand dumped by the tsunami onto previously muddy shorelines. Mangroves require mud. Planted on sand, even in places where they once thrived, mangroves swiftly died.
So the Green Coast project aimed to plant more carefully in places where mangroves would thrive, and to provide incentives for communities to take ownership of the trees and to maintain and protect them.

How did they persuade people trying to rebuild their lives in wrecked communities to spend time planting and nurturing trees? The answer was a version of microcredit called Bio-rights, developed by Suryadiputra. He offered villagers a deal. If they would set up groups to go planting, he would give them them unsecured credit to rebuild their economic lives. Villagers used the credit to buy new fishing nets, set up goat and cattle breeding programs, plant orchards, or even open village cafes. In addition, he promised that if the village groups looked after the trees, and if 75 percent or more of them survived for at least two years, then he would write off the debt.

The deal proved popular. Suryadiputra ended up running 70 village projects. In all, communities planted almost two million seedlings on some 1,000 hectares of coastline, mostly close to villages. Most survived. In only a few cases did the villagers have to pay back a cent of their credit. The result, five years after the project ended, is proud local entrepreneurs and extensive areas of forested coastline protecting new villages.

Mangroves were the trees of choice for replanting. But where sand now lines the shore, the project chose instead casuarina trees, a fast-growing type of sea pine common in the area.

In Gampong Baro, a fishing community on the northern coast of Aceh, a group of 50 villagers planted 50,000 native casuarina trees on a bank of sand piled up by the tsunami wave. In places these evergreens have grown over 20 meters high in just five years. That, as locals like to point out, is higher than the tsunami wave. In the muddy places behind the new sand dunes, they have planted mangroves.

Along many parts of the Aceh coast, the idea of planting mangroves is at odds with the past practice of converting mangrove swamps to aquaculture. On large stretches of coastline, in the decades before the tsunami, mangroves were chopped down and ponds were dug to farm shrimp. The shrimp didn’t last because of the spread of white-spot syndrome, a virulent virus. Most operators soon stocked their ponds with milkfish (Chanos chanos), instead.

‘A study found that areas with mangroves were significantly less damaged than other areas.’

After the tsunami, aid agencies rushed to repair the ponds by renovating dykes and water channels and excavating sand from the ponds. But Wetlands International has encouraged their owners to adopt a hybrid landscape with mangroves planted on the dykes and in the ponds. The idea is to protect coastlines while maintaining and even increasing the economic productivity of the ponds.

It works, as people in several communities told me. At Krueng Tunong — where more than 1,000 bodies were found after the tsunami — I met Wahab, a villager who headed the mangrove planting program around 20 hectares of village ponds. “We get more fish now that there are mangroves,” he told me. “They grow faster and in greater numbers than when the ponds were bare. I can see the juveniles hiding in the roots of the mangroves. The roots help them avoid predators. We get more crabs, too.”

They told the same story in Lham Ujong, near Gampong Baro, where the “silvo-fishery” contains 350,000 mangroves planted in and around ponds covering 50 hectares.

But the bottom line is whether such planting can save lives in future tsunamis or major cyclones. The evidence that mangroves can protect against giant tsunami waves is necessarily in short supply, and often anecdotal. But it is there.

As Bangladesh makes a controversial turn to coal to produce electricity, the construction of a large coal-fired power plant is threatening the fragile ecosystem of the Sundarbans, the world’s largest mangrove forest.READ MORE

Suryadiputra worked on a study of a unique length of coast in southeast India hit by the tsunami in 2004. The straight shoreline had a largely homogeneous beach profile, making possible meaningful comparisons between the wave’s impact on stretches of beach with and without mangroves. The study, published in Science in 2005, found that areas with mangroves or casuarina shelterbelts “were significantly less damaged than other areas.” On one stretch, two villages on the coast “were completely destroyed,” whereas three others behind mangroves “suffered no destruction.”

Daniel Alongi of the Australian Institute for Marine Science in Townsville, Queensland, says modeling studies predict just such an outcome. As little as 100 meters of dense mangroves should reduce the destructive energy of a tsunami wave by as much as 90 percent, he has concluded. That could have made the difference between life and death for tens of thousands of people in Aceh in 2004.

Maybe next time, it will.