For most people, Borneo conjures up images of a wild and distant land of rainforests, exotic beasts, and nomadic tribes. But that place increasingly exists only in one’s imagination, for the forests of the world’s third-largest island have been rapidly and relentlessly logged, burned, and bulldozed in recent decades, leaving only a sliver of its once-magnificent forests intact. 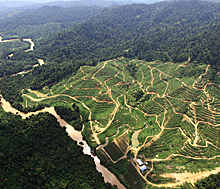 Â
Flying over Sabah, a Malaysian state that covers about 10 percent of Borneo, the damage is clear. Oil palm plantations have metastasized across the landscape. Where forest remains, it is usually degraded. Rivers flow brown with mud.

The fate of one sprawling tract of rainforest in Sabah, originally designed to be selectively logged and provide steady income for the people of the state, tells the tale of what has happened to Borneo’s forests — and highlights a possible path to restore some of them. Covering an area of 3,861 square-miles, nearly half the size of New Jersey, the Yayasan Sabah forest tract is run by a state foundation that is supposed to oversee the selective logging of the forest and channel the profits to health and education programs.

Instead, following a pattern that has devastated tropical forests in much of Malaysia, Indonesia, and Southeast Asia, politicians have used the Yayasan Sabah forest as a personal honey pot, logging it to enrich themselves, finance their political campaigns, and reward their patrons.

Politicians have used the Yayasan Sabah forest as a personal honey pot.

The Yayasan Sabah forest was supposed to be sustainably logged over an 80-year period, but instead roughly 75 percent of Yayasan Sabah has been far more intensively logged. Today, Yayasan Sabah retains only fragments of its primary lowland forest, and the foundation’s revenues for health and education have nearly dried up.

Now, the director of forestry for the state of Sabah, Sam Mannan, is trying to reverse the region’s trend toward deforestation, moving forward with a plan to convert 10 percent of Yayasan Sabah to oil palm plantations to generate revenue, and then gradually restore most of the rest of the tract so it can be sustainably logged. Whether he will succeed or simply end up with even more of Yayasan Sabah being converted to oil palm plantations remains an open question.


View Larger Map
The Malaysian state of Sabah (marked A on the map), which occupies about 10 percent of the island of Borneo, has experienced heavy logging of its forests. Other parts of Borneo, which belongs mainly to Indonesia, also have suffered severe deforestation.
In addition to trying to turn around the situation in Yayasan Sabah, Mannan has so far successfully protected some of the last remaining lowland primary forests in Sabah. Indeed, if you travel far enough in Sabah, some of Borneo’s most treasured forest still exists. Colorful hornbills soar over the broccoli-like canopy, orangutan nests sit high in the treetops, and clear streams cascade over waterfalls.

The situation in much of the rest of Borneo is far worse. Forests in the neighboring Malaysian state of Sarawak have seen an environmental Armageddon over the past 30 years, its woodlands suffering multiple cycles of intensive logging, often a prelude to rapid conversion to oil palm plantations. Sarawak’s chief minister and his close family are under investigation for acquiring billions of dollars in overseas assets from their timber dealings. In April, documents leaked by Malaysia’s Anti-Corruption Commission revealed the transfer of millions of dollars to bank accounts linked to Sabah’s chief minister, Musa Aman.

Meanwhile, the four Indonesian provinces of Kalimantan, which make up nearly all of the rest of Borneo, have suffered a plague of illegal logging; from 1985 to 2001, 56 percent of protected lowland forest was chopped down. From 2001 to 2008, nearly 9,000 additional square miles of tropical forest were cleared completely.

“Sabah is still way ahead of Sarawak and Kalimantan: surviving primary forests areas are being conserved, reforestation and forest restoration is happening, and encroachers have moved out of forest reserves,” said John Payne, a conservation scientist with the Borneo Rhino Alliance. “The fear is the next government will convert forest concessions to oil palm. So Sam Mannan seems to be doing everything he can to publicize and put money into those reserves. His biggest achievement is securing the lowland forest reserves.”

Sabah’s forest management was born of good intentions. In 1966, the government set aside a vast tract of remote rainforest to be managed

Forests in the neighboring Malaysian state of Sarawak have seen an environmental Armageddon.

by the Yayasan Sabah foundation. The first years of the scheme went well. Forest regulations were generally respected and a generation of Sabahans benefitted from millions of dollars in scholarships and poverty alleviation programs. Businesses did well, too: the coastal of city of Sandakan — Sabah’s wood processing and trading hub — boasted in the early 1980s of having the highest concentration of millionaires on the planet, mostly from the state’s timber industry.

Forests not only became the state’s principal rainy day fund, but eventually came to be seen as a piggy bank for politicians. The biggest potential beneficiary was the chief minister, who controls both Yayasan Sabah and appoints the director of the forestry department, obliging the most senior forest official to abide by his orders.

Soon, the push to generate more cash began to take a toll, and in the 1970s logging accelerated in forests across Borneo, including Sabah, due to rising global demand for timber products. The situation for forests outside the area designated as permanent forest estate was worse due to the emergence of a new and highly profitable crop: oil palm. Oil palm plantations in Sabah grew from almost nothing in the mid-1980s to covering nearly a fifth of Sabah’s landmass by 2010.

Inside the Yayasan Sabah concession, logging was rampant, with companies cutting ever-smaller trees and using helicopters to harvest steep slopes. Yayasan Sabah’s revenue plunged with declining timber yields. The situation reached a crescendo in 1998 when the then-chief minister signed off on a massive pulp mill to be run as a Malaysian-Chinese joint venture. The mill would require nearly a third of Yayasan Sabah’s concession to be cleared and planted with fast-growing acacia. When Sam Mannan, then director of forestry, objected to the project, he was relieved of his post by Sabah’s chief minister.

What happens in Sabah could portend what happens on a larger scale across Borneo.

establish oil palm plantations on 100,000 hectares of land cleared for the non-existent pulp plantations. His thinking was that the revenue created by oil palm would generate the needed funds for Sabah’s social programs. Otherwise, with the state desperate for money, he feared that Sabah officials would remove Yayasan Sabah from the forestry department’s control and turn it over permanently to oil palm developers. “If Yayasan Sabah fails, we’ll all eat grass,” Mannan said in an interview. “It won’t be able to meet its economic obligation.”

Glen Reynolds, an ecologist with the Royal Society Southeast Asia Research Program, last year published a seminal paper with John Payne on the condition of Sabah’s forests, saying that a reasonable amount of biodiversity can survive in partially logged forests, whereas “catastrophic” losses occur when there is conversion to plantations. “The problem is whenever there are calls for money, further areas could be pared away,” said Reynolds. “The big risk in Yayasan Sabah is conversion of what’s left of the lowland forest.”

Some of Sabah’s forests are so wrecked they might not recover to their original structure of a closed canopy of tall hardwoods. So the department of forestry is pushing active management of forest areas, cutting choking vines, and doing “enrichment planting” with native trees. The long-term plan is to restore the forests to a state of health where they can be logged again, albeit under more stringent guidelines set forth under the Forest Stewardship Council (FSC), an eco-certification body. The Sabah Forestry Department is targeting 2014 for full certification of Sabah’s forest concessions. At the same time there is experimentation occurring in parts of the Yayasan Sabah concession, including the world’s first Reducing Emissions from Deforestation and Degradation (REDD+) project.

“One of the strategies within the forestry department is linking with the FSC because it binds loggers to compliance,” said one forestry official. “So if a chief minister or a politician wants to log, it becomes controversial because we’ve got areas that are FSC-certified. It becomes more difficult for politicians to use as a personal ATM.”

What happens in Sabah could portend what transpires on a larger scale across Borneo. Sabah has committed its forest reserves to the Heart of Borneo initiative, a plan pushed by WWF to protect and link remaining quality forest areas across the island. (Sarawak’s commitment is virtually nil.) Forever Sabah, a grassroots push to transition Sabah toward a sustainable, low-carbon economy, has been created. The question going forward is whether there will still be enough forest across Borneo to save.

“We can’t do business as usual,” said Mannan. “We don’t have huge areas of virgin forest available for logging anymore.”