To Catch a Rhino: Saving a Species 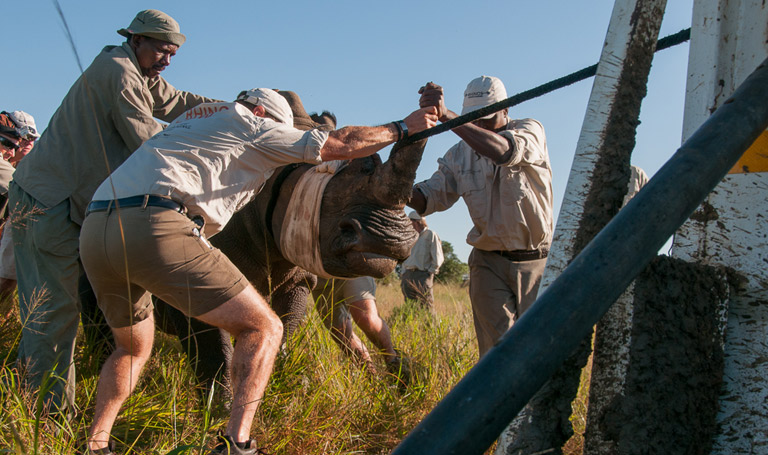 A capture team moves a tranquilized Southern White Rhino into position at the ramp of a transport crate. ADAM WELZ

South Africa, home to 75 percent of the world’s rhinos, lost a stunning 668 of the animals to poachers in 2012. But the Phinda Private Game Reserve in the country’s KwaZulu-Natal Province has thriving populations of both black and white rhino. To assist with rhino reintroduction efforts in neighboring Botswana — which had lost its entire rhino population to poaching — the wildlife travel company that owns the reserve, andBeyond, is donating six animals to Botswana, the first time a private company has given rhinos to a nation state.

In January 2013, the six donated white rhinos were captured and transferred to a quarantine facility over a two-day period. Yale Environment 360 contributor Adam Welz was invited to join the operation and, with Sarah Geline, produced an extraordinary photo essay that captures the harrowing process and the power of these magnificent creatures.

The animals will be released later this year in Botswana’s famed Okavango Delta, where they will be under military protection. Botswana is currently facing less poaching pressure than South Africa, where organized gangs are killing rhinos for their horns, which are prized in Asia for medicinal purposes. Phinda recently lost a rhino to poachers and has suffered a wave of incursions by would-be poachers who were arrested thanks to the reserve’s aggressive rhino protection strategy. Moving rhinos to Botswana, says Les Carlisle, the conservation manager for andBeyond, is “an ideal opportunity to move our eggs out of one basket.”

ABOUT THE AUTHOR
Adam Welz is a South African writer, photographer and filmmaker based in Brooklyn, New York. His work includes an award-winning film about eccentric birders in New York City and exposes of environmental crime throughout southern Africa. Welz is a member of the Brooklyn Filmmakers Collective. In an earlier article for Yale Environment 360, he wrote about how an increasingly sophisticated market for rhino horns is decimating rhinoceros populations in Africa.