When they arrived at South Africa’s Hluhluwe-iMfolozi Park, AndrÃ© Botha and his companions found that an elephant had died just inside the reserve’s fence. But instead of vultures and other scavengers tussling for their piece of the ecological bonanza, there was only eerie silence. The carcasses of 37 African white-backed vultures lay in the grass around the elephant.

Botha, the co-chair of the International Union for Conservation of Nature’s (IUCN) vulture specialist group, knew the whole story with one glance. The elephant carcass had been poisoned to kill the vultures that would come to feed on it. The heads of 29 of the vultures had been cut off to be sold for traditional African medicine. The eight vultures with their heads still intact showed that the poisoned elephant continued to kill after the poacher departed, starting what could have been a significant vulture slaughter if Botha had not intervened.

It is the story, with some variations, of vultures all over Africa. In July 2013, roughly 600 vultures died after scavenging a dead elephant that had been poisoned near Namibia’s Bwabwata National Park. In the savannah of East Africa and southern Africa, there has been an estimated 50 to 60 percent decline in vultures. In the West African countries of Burkina Faso, Mali, and Niger, four species of large vultures declined 98 percent outside of protected areas over 35 years, according to Jean-Marc Thiollay of France’s Laboratory of Ecology and Evolution in Paris.

Ralph Buij, a researcher with the Netherlands’ Alterra Wageningen University and Research Center, discovered similar population declines in another West African nation, Cameroon. In addition to the killing of vultures, factors such as habitat loss and declines in the wild ungulates on which vultures often feed are taking a toll. “Even the most common vulture species has declined 44 to 55 percent compared to 1970,” says Buij.

In several West African countries, some species of vultures have declined 98 percent outside of protected areas.

The reasons behind the killing of African vultures are far different — and often more malevolent — than the steep and widely publicized declines of vulture populations in India, Pakistan, and Nepal. There, vultures have been accidently poisoned after feeding on the carcasses of cattle treated with the veterinary anti-inflammatory drug diclofenac, which is highly toxic to them. Five of the Indian subcontinent’s vulture species declined 95 percent from 1993 to 2000, according to BirdLife International. The loss of so many vultures has had major consequences, with cattle rotting in the streets, an upsurge of wild dogs, and an increase in rabies.

Sharp declines continued on the subcontinent through 2007, a year after India, Pakistan and Nepal banned the manufacture of the drug. Those countries now encourage the use of an alternative drug that is safe for vultures and also have created captive breeding programs. Since 2008, Indian vulture populations have leveled off or even increased slightly.

Vultures in Africa are being poisoned for several different reasons, both purposely and accidently. Recently, some of the more nefarious killers have been big game poachers, who have sharply intensified the slaughter of elephants for their ivory and rhinoceroses for their horns, which are valued in Asia for their purported medicinal purposes. In the past three or four years, the poachers have realized that circling vultures are tipping off the authorities to their crimes, so they poison them. Carbofuran, purple grains that are intended as an insecticide, is the most commonly used poison.

By poisoning elephant carcasses, poachers can remove the vultures that could draw attention to their crimes.

“Poachers will kill an elephant and poison the carcass to remove vultures from the environment,” says Botha. “It’s rampant in East Africa right now.”

All over the world, farmers protect their livestock by killing carnivores. In Africa, the favored method is poison. “In Kenya, we got our first wind of this situation when the poisoning of lions, leopards, and hyenas became a big issue again,” says Kenya-based Darcy Ogada, assistant director of Africa programs for The Peregrine Fund. Farmers set out livestock carcasses salted with poison. “Vultures come in by the hundreds and die by the hundreds,” she said. The vulture deaths far outnumber the carnivores that the farmers intended to kill.

Poisoning vultures for traditional African medicine also is taking a toll. When Buij investigated why the vultures of Cameroon were disappearing, he found that the demand for vulture parts for traditional African medicine in Nigeria was so strong that it had nearly wiped out several species. Nigerians were turning to the neighboring countries of Cameroon, Niger, Benin, Chad, and Sudan to buy vultures, most of which are killed by poisoning, according to Buij. 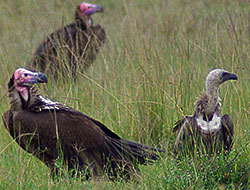 Lappet-faced vultures and an African white-backed vulture in a game reserve in Kenya. JERRY FRIEDMAN

The use of vultures in traditional medicine is limited mostly to West Africa. Vultures are believed to bring luck and to be able to see the future, says Buij. The vultures’ clairvoyance is associated with their heads, making that body part particularly valuable. Sales are strong when there is a large lottery jackpot. South Africa also has a tradition of using vultures in traditional medicine and vulture heads also are prized, Botha says.

Buij found that in Cameroon, while the heads of the vultures were sent to Nigeria, the meat of the birds was eaten locally. In Nigeria, a quarter of the vultures sold were intended as food.

In Africa, using chemical poisons to kill wild animals for the bushmeat trade and for use in traditional medicine is common, according to Ogada. Sometimes the cause of death is hidden from the consumer, but in some places poisoned bushmeat and traditional medicines are knowingly consumed — perhaps, she says, drawing on a history of hunting with arrows dipped in plant-based poisons.

There are no easy solutions to the problem of poisoned vultures in Africa. In April, the Vulture Conservation Foundation; the government of Andalusia, Spain; and Working Dogs for Conservation organized a conference so that scientists from around the world could discuss the African vulture crisis and see first-hand the workings of Andalusia’s comprehensive anti-poisoning program.

Spain is one of Europe’s vulture hotspots, home not only to European species, but also vultures that migrate from Africa. Its culture of farmers and hunters poisoning predators was so ingrained that it threatened several wildlife species, particularly eagles and vultures. To protect these species, Andalusia has over the last decade strengthened its laws against poisoning, started prosecuting poisoners, and raised fines as high as 200,000 Euros (about $270,000.)

To date, most of the work to conserve vultures in Africa has focused on documenting the birds’ decline.

The group that investigates wildlife poisonings in Andalusia includes two teams of dogs trained to sniff out poisons in carcasses and food left as bait. Investigators are taught to recognize the symptoms of poisoning in the field and to carefully collect evidence. A forensics lab uses liquid and gas chromatography to screen for more than 100 poisons.

“We have some experience and luckily managed to reduce the impact of poison by about 60 percent in ten years, but this is a very hard job,” says Iñigo Fajardo, who represented Andalusia’s anti-poison program at the conference. Fajardo and many others would like to see similar programs protecting Africa’s vultures. But is such a program practical in the developing world?

“I believe the legal system is the strongest practical way of addressing poisoning, and I believe we need it even in third world countries,” says Martin Odino, a researcher affiliated with the National Museums of Kenya who works as an independent researcher on bird poisoning issues.

Odino advocates giving Africans an economic incentive to conserve wildlife, such as hiring locals to scout for poachers and lead bird-watching tours, a tactic he has tested with some success in Kenya. To date, most of the work to conserve vultures in Africa has focused on documenting the decline. Unlike India, in Africa there were few baseline population studies to compare with recent surveys. One of the first international organizations to take interest in African vultures was the U.S.-based Peregrine Fund. Munir Virani, Africa program director for the fund, has created a program to mentor Masai youth about the ecological value of vultures. He is also working in Kenya to install lights to deter lions and other predators from killing livestock, as vultures are the most common victims when livestock owners retaliate by poisoning the predators.

Hopes for curbing wildlife poisoning and saving vultures are highest for countries that have relatively stable governments, such as Kenya, or where the country is relatively wealthy, such as South Africa. In fact, when Botha investigated the vulture poisoning in the Hluhluwe-iMfolozi Park, his team was soon joined by the police, who gathered two vulture carcasses as evidence and recorded the sex and species of the rest.

To prevent further poisoning, the group piled dry wood on the elephant carcass, lit a fire, and burned the elephant to ashes.

But even governments that might be able to spare some resources to prevent the extinction of African vultures lack the political will, says Ogada. Often it takes pressure from outside Africa to create a change. For example, she says, little happened to curb lion poisonings until about five years ago, after the U.S. television news program, “60 Minutes,” aired a report.

However, for a bird that may range across countries and even continents, success in one country is not enough. Botha reports that when the 600 vultures were poisoned last year in Namibia, people noticed fewer vultures in the southern Kalahari of South Africa, hundreds of miles away.

“Poison,” says Fajardo, “has neither eyes, nor heart, and does not respect boundaries.”