Gustavo Londoño squats motionlessly under a rainforest canopy in Peru’s Manú National Park, staring into the dense undergrowth. A dove coos somewhere. An oropendola bird warbles. Birds must be out there amid the tree crooks, upturned roots, and underground cavities. But where?

Manú National Park in Peru, where research on warming’s impact on tropical birds is taking place.
Londoño, a Colombian biologist, has been searching painstakingly to find their nests. He’s located hundreds of them here on the Amazon flank of the Andes, though it’s taken him eight years. He has rigged each one with monitoring gear to collect data that will help him better understand how tropical birds will respond to global warming.

Climate change is expected to warm this region about 7 to 11 degrees Fahrenheit in this century. Researchers have predicted that the warmer temperatures would force birds uphill, wreaking havoc on them and their ecosystems. But Londoño thinks they’ll stay put — and face a different kind of existential threat.

Now a professor at Universidad ICESI in Colombia, Londoño began these studies in 2007, while in graduate school at the University of Florida. He set off then to Peru to study an issue that has intrigued scientists at least since the 18th century, when pioneering biologist Carl Linnaeus published his 1781 treatise On the Increase of the Habitable Earth: Why do plants and animals segregate themselves by altitude? Linnaeus believed that species had spread from mountaintops to lowlands after the biblical flood receded. Modern scientists discarded this theory long ago, but they are still groping for a completely satisfactory alternative.

This segregation by altitude is especially noticeable in mountainous regions, such as Manú National Park, where Peru’s national bird, the cock-of-the-rock, lives between 3,000 and 7,500 feet above sea level, and nowhere else. The hooded mountain tanager lives only at between 7,900 and 10,500 feet. Indeed, this Connecticut-sized mountainous region is home to more species of birds than all of the contiguous United States, many sorted in band-like territories.

Temperatures in the tropics vary little — generally only a few degrees — over a day and between months. (By contrast, in a Northeast U.S. city such as Boston, temperature fluctuates from a low near zero to the 90s most years, a span of about 90 degrees Fahrenheit.) For this reason, in 1967, Daniel Janzen, a young biology professor at the University of Kansas, published a paper, now considered a scientific classic, in the well-regarded journal The American Naturalist hypothesizing that temperature plays a potent part in anchoring plants and animals to specific elevation zones in the tropics. Janzen theorized that, after thousands of years of stable tropical conditions, plants and animals couldn’t adapt to big temperature shifts. This hypersensitivity, he said, restricted each species to a limited range of altitudes, as temperature correlates closely with elevation — around the globe, temperature shifts roughly 1.5 degrees Fahrenheit with every 500 feet of altitude.

Londoño says that the indirect consequences of warming might turn out to be the most damaging of all.

Until recently, little research had examined the significance of Janzen’s paper, though biologists generally considered its thrust correct. “It was ignored for 20 years,” says Janzen, now at the University of Pennsylvania. But that changed as researchers refined predictions of climate change’s effects on tropical forests, which are among earth’s most biologically rich places. Climate models generally predict that the tropics will warm less than almost anywhere else on earth. But Janzen’s theory implies that global warming could still cause disproportionate change there. It suggests that mountainous species will migrate uphill to avoid intolerable heat. However, mountains have tops, so animals and plants already at the highest elevations could migrate no farther. Species moving upward would cram into increasingly shared turf.

Londoño is one of a growing number of scientists whose studies seek to shed light not on whether global warming is happening, but on what ecosystems and species will look like after it takes hold. “Who is going to win here?,” asks Londoño. “Because there’s not enough space for everybody.”

Even if shared high ground served as a climate-change ark, another problem arises. Species differ in their abilities to pack up and move. Birds and many insects and mammals are highly mobile, but trees migrate only as new generations mature from dispersed seeds. These differences most likely will scramble ecosystems. Predators might drift outside the ranges of their prey. Birds might lose access to nest-building supplies or favored seeds. Londoño says these indirect consequences of warming might turn out to be the most damaging of all.

The scientist has been stung by wasps, skewered by bamboo barbs, and infected by flesh-eating botflies.

In 2011, Londoño, his classmate Jill Jankowski, now a professor at the University of British Columbia, and their faculty adviser Scott Robinson teamed up with an animal physiologist at the University of California, Riverside, Mark Chappell. They have been researching three different theories of what fixes birds to their specific bands of altitude. They speculate that what they learn about birds will probably apply also to harder-to-study animals. Decades of research on the varied bird populations in Manú laid much groundwork — range maps of each species, for example. Jankowski studies competition between related species. Chappell examines birds’ metabolic rates at different pressures and temperatures. Londoño investigates interactions between birds and predators.

Londoño slithers down an embankment into a shallow stream, painting a new dirt streak on the seat of his pants. He scans the low escarpment on each bank. Birds sometimes excavate nest cavities in the mud. But he finds none.

Londoño sometimes wanders days before finding one active nest. He’s been stung by wasps, skewered by bamboo barbs, and infected by flesh-eating botflies. A troop of almond-size leafcutter ants, wielding skin-shredding mandibles, invaded his tent. A 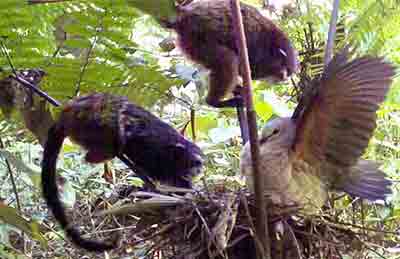 Back up on the forest floor, Londoño raises his binoculars and stares through the lenses at a dark bird with a scarlet bill perched on a branch. A black-fronted nunbird. “Look at its bill. What do you see?” he asks. “Dirt?” responds Corey Doerscher, an apprentice he’s training in the art of nest hunting. Nunbirds, Londoño explains, nest underground. This one had probably been digging. Its nest should be close. After a few minutes rummaging through the undergrowth, he spots the sought-out hollow at the base of a tree. Striations in the dirt indicate the burrowing that may have sullied the nunbird’s bill.

Londoño and volunteer helpers have located 3,700 nests of 300 species, most never before scientifically described. Some birds build simple down-lined cups. Some construct elaborate enclosed shelters of mud, or chip nooks into bulbous termite nests hanging from trees. Some weave baskets of moss, ferns, and spider silk.

Incubating eggs and hatchlings are helpless against predators. Like human parents, breeding adults face the problem of how to take a break from the nest. They face a stark tradeoff. They need to scavenge food such as seeds and bugs for their own nourishment. Yet to get food, they must leave eggs without incubation or protection. Cooler eggs hatch later, increasing exposure to predators.

Londoño and his crew wire up tiny digital thermometers — one inside and one outside each nest. Londoño studies temperature records to learn how adults strike the balance between personal needs and those of eggs and nestlings. He and his volunteers also aim automated digital cameras at nests. The cameras are triggered by motion and take a frame per minute, often snapping shots of intruders.

The camera shots resemble security photos — except these perps are monkeys, toucans, lizards, and snakes.

Londoño has photographed more than 350 nest-invaders in the act. Previously, no tropical researcher had recorded more than a dozen. Many shots resemble security photos — intruders caught unawares, depicted in the ghostly gray scale of infrared surveillance footage — except these perps are monkeys, toucans, snakes, and lizards. Primates sometimes stare directly into the lens as if posing. Previously, researchers knew little about which animals preyed on birds and how often. The cameras have answered these questions.

Photos and nest inspections show that, overall, only a small percentage of eggs and chicks escape predation and live to fledge. The mixture of predators, and the percentage of clutches that survive, vary considerably with altitude. Only about three percent of lowland eggs hatch and reach maturity. But birds in elevated habitats, above 4,000 feet, enjoy relatively carefree lives. Twenty to 50 percent of eggs end up producing fledglings that graduate from the nest. Londoño believes that, paradoxically, the relative safety of birds at these altitudes today may leave them vulnerable to future threats.

Londoño’s cameras show that snakes are by far the most dangerous predators. They steal half of all the eggs and chicks taken from nests. But, to his surprise, he’s recorded almost no snake kills above 4,000 feet. He suspects that nest-robbing snakes simply can’t tolerate the cooler weather at these higher elevations. But, he says, the snakes are coming. 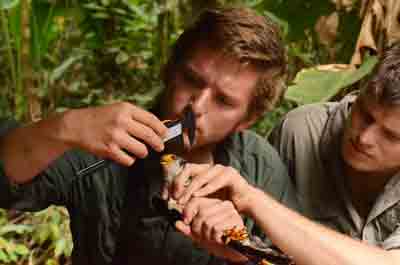 Volunteer workers Kurt Ongman (left) and William Jones record measurements of a barred forest falcon. DANIEL GROSSMAN
temperature through their metabolism. They also employ behaviors such as panting, sweating, and hibernation. But ectotherms have fewer options. When it’s cool, they bask in the sun. When it’s hot, they find shade in a burrow or under vegetation. If a habitat’s temperature goes up too much, an ectotherm there must either move to cooler conditions, or die out.

By exposing captive birds to a variety of pressures and temperatures in a research chamber, Chappell has determined that Manú’s birds can easily withstand the warmer temperatures predicted for later this century. He says there’s no physiological need to migrate to new habitats. But Manú’s bird-eating snakes are a different story. Londoño says current ranges will probably become unbearably hot for them, stimulating a gradually upward climb. When they reach 4,000 feet, he says, they’ll encounter birds that have almost never experienced such predation. The birds could be wiped out.

Londoño likens Manú’s high-elevation birds to the native birds of Guam. Until the mid-1900s, Guam’s birds had never experienced snakes. But shortly after World War II, the brown tree snake, a venomous native of Australia and South Pacific islands, arrived, probably hitching a ride on a ship or in airplane landing gear. The snakes reproduced explosively, feasting on birds that had never developed snake defenses. Within a few decades, they had exterminated the Mariana fruit dove, Guam flycatcher, rufous fantail, and cardinal honeyeater.

Peru’s highland birds live on an island — an island made by elevation, not water.

Peru’s highland birds also live on an island — an island made by elevation, not water. They also probably lack snake defenses, says Londoño. He has discovered that low-elevation eggs hatch and fledge in half the time of their high-altitude counterparts, possibly as an anti-predation strategy. In a study published in the January 2015 issue of The American Naturalist — the same journal that published Janzen’s paper on the temperature sensitivity of tropical species — Londoño reported a never-seen-before trick practiced by lowland species to fool predators. Chicks of the cinereous mourner disguise themselves in a suit of fuzzy orange hair and creep in motions reminiscent of a poisonous caterpillar.

Janzen, who isn’t involved in Londoño’s research, says he has no doubt that snakes will outpace birds ascending the Andes as temperatures rise. In the mountains of Costa Rica, were he does his field work, he’s observed many species of ants, also ectotherms, move their range upward by more than 500 feet in elevation. He suspects that ground-nest birds in territories that have been invaded may be at risk. But Janzen is not going to study the question. With climate change, he says, “The problem is not more research. The problem is that people don’t want to take the hit to do something about it.”