Last August, residents of Chongqing town in the central Chinese province of Shaanxi surrounded the town’s huge lead works, run by China’s largest lead smelting company. It was a brave act in a totalitarian country. But the people of Chongqing were angry because the town’s doctors had found that of the 731 children they checked, 615 were suffering from lead poisoning caused by pollution from the Dongling Lead and Zinc Smelting Company.

The scandal erupted after a six-year-old girl named Miao Fan complained about a stomach ache. “At first we thought she was trying to avoid school,” said her mother. “We took her to the hospital and found my daughter had got lead poisoning. I never heard of that before, and I suggested my friends nearby have their children checked too.”

In all, 166 of the children were treated in local hospitals. Each had lived near the giant smelter. After the brief protest on Aug. 3, a local newspaper reported the story on an inside page and town authorities issued a bland statement. The plant had emitted 1.11 tons of lead into the air and local watercourses in the previous year, the authorities said, but it had met all national environmental safety standards. 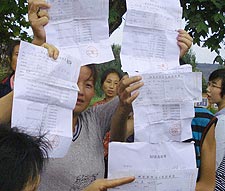 STR/AFP/Getty Images
Villagers in Chongqing hold up test results showing excessive levels of lead in the blood of their children.

In the days before online news, that would probably have been the end of the matter. But reporters from the state Xinhua Online news service spotted the local item and a week later they showed up to investigate. Emboldened, the parents resumed their protest. They surrounded the smelter, tore down the wall, ransacked the offices, and destroyed machinery.

Now Xinhua had a story. Its splash on Aug. 18 was accompanied by an editorial that asked: “If pollution standards were met, how is it that people are still poisoned by lead?” Within days, the factory was closed, and the Dongling case had set off a chain reaction across the country, as more and more citizens protested against metal smelters and mines, and Chinese journalists became bolder in reporting the protests.

If this were happening in the West, it would hardly be extraordinary that a major news story had developed out of events such as those in Chongqing. But in China, this was something new, points out Qian Gang, a leading Chinese journalist who studied how the story grew for the China Media Project, a research group at the University of Hong Kong. The major Communist Party news media, such as Xinhua, are starting to report environmental stories, he says. “High-level party media have taken the lead.” Of all the Chinese media, they are proving to be “the fiercest, both in revealing the facts and in offering shrill criticism.”

Why? In the past, the party media had always supported officials and covered up any scandals or misdeeds. If anyone was going to break such a story, it would likely have been the new commercial media. But Qian Gang notes that in China today, the central authorities often use the media as a means of exerting control over wayward local authorities or powerful commercial enterprises. It is also, he says, a means of monitoring popular discontent, known as yulun jiandu, or “supervision by public opinion.”

After the Sichuan earthquake in 2008, which became a turning point in reporting in China, President Hu Jintao articulated his new press policy, which demanded that party media strengthen what he called “public opinion channeling.” Chinese media are referring to this as “grabbing the microphone” — under this strategy, the authorities control commercial media tightly, while affording privileges to the central party media, including a license to pursue investigations.

Pressure following the Xinhua reports resulted in the Dongling metals plant closing and 11 local public health officials being disciplined. Authorities distributed food that can help remove lead from the body, such as laver, garlic, wulong tea, and seaweed.

As the fastest-growing economy in the world for the past two decades, China is one of the world’s most polluted nations. But it is also becoming ground zero for citizens’ action on the new health and environmental issues created by industrialization. In 2008, there was widespread public anger in China about toxins in food and consumer products. But in recent months, public attention has shifted to environmental pollution near mining and industrial workplaces. And Chinese media, headed by former party propaganda officials, are bringing the scandals to national — and sometimes international — attention.

Many of the concerns resemble those of previous eras in Europe and North America, especially the discovery of outright poisoning from heavy metals like lead, which causes symptoms ranging from abdominal pain and headaches to anemia and impaired neurological development in children. In severe cases, children can lapse into a coma and die.

To date in China, protests and media scrutiny have led to a number of factory closings. But public protests appear ready to continue as government authorities struggle to assess where risks lie and how to combat them.

Days after the Dongling story made headlines, the authorities in Hunan in southern China shut a manganese smelter near Wugang, and detained two executives, after more than 1,000 people protested when 1,300 children fell ill — again from lead poisoning. Some were losing their hair, according to press reports. The plant had been open for only 15 months. Reporters from Xinhua discovered it had been operating without the approval of the local environmental protection bureau.

Then three smelters were shut in Jiyuan city in Henan, the world’s leading center for the manufacture of the metals used in batteries. And in September, villagers blocked a major road in Fujian in eastern China. They were protesting the discovery that 121 children out of 287 tested in three communities were suffering from lead poisoning, apparently a result of pollution from the local battery factory. The factory, which only opened in 2006, suspended production.

Metals like lead and cadmium are increasingly recognized as health threats near Chinese mines.

In January, another battery factory, at Dafeng City in Jiangsu province, shut after 51 children became ill with lead poisoning. Again the factory had expanded without permission. Lead is not the only metal causing health problems. In another case that came to light in Hunan last fall, doctors diagnosed 509 inhabitants of Liuyang and Zhentou suffering from cadmium poisoning, which causes kidney and liver damage, and even cancer. Two residents had died before it was uncovered. Locals blamed the Changsha Xianghe plant, which opened in 2003 to manufacture zinc sulphate, an additive in animal feed.

The risks in Changsha were hardly unknown. In 2000, U.S. authorities had banned zinc-based fertilizer imports from China after discovering they were contaminated with cadmium. But Xinhua reported that the Changsha factory had been heedlessly discharging industrial waste containing cadmium into watercourses that villagers used to irrigate their crops.

Metals like lead, cadmium, and zinc are also increasingly recognized as environmental and health threats in Chinese mining areas. In southern Guangdong, where rivers run orange and white with contamination, Chinese journalists have dubbed some communities “cancer villages.”

One facility under attack in 2009 was the state-owned Dabaoshan mine, which discharges acidic water laced with metals such as cadmium, killing most life in the Hengshi River, a major waterway in the area. Villagers near the mine drink and irrigate their rice crops with well water contaminated with cadmium and zinc. A 2009 study by Ping Zhuang, of the South China Botanical Garden at the Chinese Academy of Sciences in Guangzhou, confirmed dangerous levels of the metals in paddy soils and local food.

Adults suffer high rates of colon cancer. And Qing-Song Bao of the Department of Food Safe Supervision in Yixing reported that children downstream of the mine had high levels of lead, cadmium, and zinc in their bodies. He linked this to high rates of anxiety, depression, social problems, somatic complaints, difficulty concentrating, and delinquent and aggressive behaviour.

One scientist said pollution was responsible for a tenth of all birth defects in China.

Faced with a crescendo of public concern, the central authorities in China two years ago launched a Pollution Source Census, demanding that the estimated 15,000 polluting factories, as well as mines and farms, come clean about their emissions, which often exceed formal license limits. The government insisted the aim was to evaluate rather than prosecute, and that legal action would only follow if companies continued the cover-up. The census results were published in February, revealing twice as much water pollution as previously recognized.

The pollution census may be lifting the lid on a story bigger than anyone has yet guessed. Last year a genetics professor at Nanjing University, Hu Yali, told journalists he believed environmental pollution was responsible for a tenth of all physical defects in Chinese infants. That was especially alarming since the vice-minister in charge of China’s National Population and Family Planning Commission, Jiang Fan, had warned that birth defects had risen by 40 percent in China since 2001. She blamed emissions from mining and chemical industries and announced a new screening program for women contemplating pregnancy who lived in the eight provinces with the worst problems.

But while national authorities and media may push for reform and openness, local officials often quash protests and cover up even the worst pollution. Last summer, Chinese civil rights activists reported that Sun Xiaodi, an environmentalist in Gansu province, had been arrested along with his daughter and sent for “re-education” after exposing pollution problems at a uranium mine. Chinese law, at least in theory, protects whistleblowers who report environmental pollution. But the pair was charged instead with “providing state secrets overseas.”

And even in Chongqing, the local cliques appear to be back in charge. Local police have warned residents that there will be repercussions if they speak to the media. Some protesters have been accused of being members of the banned Falun Gong spiritual movement. Officials are even reported to have tried to discourage doctors from conducting tests for lead poisoning on new babies.

Late last month, the Dongling smelter announced that it will shortly reopen. One of the original protesters, Yang Tagu from the poisoned village of Sunjianantou, told reporters, “They want us to remain silent when the factory resumes production.” That may be so. But given the new-found activism of citizens and journalists, silence is in increasingly short supply in China today.