Allied soldiers and locals escaping the Japanese advance through northern Burma during World War II had to contend with dense jungles, scorching heat, leeches, insects, torrential rain, and 10,000-foot peaks dividing the country — now known as Myanmar — from India. Today, large swaths of that forbidding wilderness remain intact. The country’s Northern Forest Complex, a 12,000-square-mile tract that runs along the border from India to China in Myanmar’s Kachin State, is home to tigers, bears, elephants, and hundreds of bird species. The heart of that forest, at nearly 8,500 square miles, is Myanmar’s Hukaung Valley Wildlife Sanctuary, the largest tiger preserve in the world.

Now, as Myanmar cautiously embraces democracy and opens up to the world — President Obama will visit the country next week, becoming the first sitting U.S. president to do so — a key question is what impact an influx of outside capital and foreign expertise will have on the country’s wild lands, biodiversity, and natural resources. The sanctions imposed by Western governments in response to the military dictatorship’s brutal human rights record arguably helped to preserve Myanmar’s remote areas by denying access to credit and foreign investment that would have otherwise been used for road building in the northern jungles.

Some experts warn an influx of foreign capital into Myanmar might cause significant environmental harm.

But with Western governments now lifting sanctions to reward the government’s democratic reforms, some experts warn that an influx of foreign capital might open the floodgates to development and cause significant environmental harm. In a bid to expand regional trade routes, for instance, both the Chinese and Japanese governments are making plans to open transportation corridors through some of Myanmar’s far-flung jungles, paving the way for resource exploitation. The economic might of China, just to the north, is ever-present. In the Hukaung wildlife sanctuary, only 50 tigers are thought to survive, the rest victimized by an illegal wildlife trade with Chinese merchants who pay up to $30,000 for a single animal, dried and packed in a box.

The harsh sanctions also took a toll on Burma’s environment, pushing the country into abject poverty and driving villagers toward poaching and slash-and-burn farming practices that deplete soils and turn landscapes into wastelands. On a drive through the Taung-nyo public protected forest in Rakhine State — near the west coast and way off the beaten tourist track — I saw ragtag bamboo settlements dotting the roadside and a patchwork of charred hillsides and scrubby growth. My host, U Myint Aung, an ex-forestry official who now runs a homegrown non-governmental organization called Friends of Wildlife (FOW), said that the settlements were illegal but tolerated by forest rangers who allow villagers to remain in exchange for small bribes.

So far, Western conservationists in Myanmar are generally heartened by the strong environmental stance Myanmar’s rulers appear to be taking in advance of an expected surge in economic development. “They seem to be taking a much more measured approach to environmental planning, even without international pressure, and that’s to be applauded,” says Joe Walston, executive director of the Asia program of the New York-based Wildlife Conservation Society (WCS).

In a well-publicized move last year, Myanmar postponed a massive China-sponsored dam that would have flooded more than 64,000 acres at the headwaters of the Irrawaddy River, citing environmental concerns. Mining along the country’s four major rivers has been banned. And during his inaugural speech in March 2011, President Thein Sein said, “We will pay serious attention to conservation of forests… and lay down a new policy in which we will work for economic development in parallel with environmental conservation.”

New money unleashed by the end of sanctions could help shore up the underfunded environmental sector.

Alan Rabinowitz, chief executive officer of Panthera, a big-cat conservancy group based in New York City, believes that new money unleashed by the elimination of sanctions could go a long way toward shoring up the country’s chronically underfunded environmental sector. In 2003, when he was working for WCS — the only foreign conservation group to maintain a consistent presence in Myanmar during the years of dictatorship — Rabinowitz spearheaded the creation of the Hukaung Valley Wildlife Sanctuary.

“There’s never been enough money or expertise or people to help with the defense of Myanmar’s protected areas,” he says. “For years, the World Bank has told me that it wants to help but that it can’t because of the sanctions. So I see the opening as a huge step forward for Myanmar’s ecology.”

U Than Myint, the WCS’s country program director in Yangon, the former capital, agrees that the lifting of sanctions will benefit NGOs in Myanmar’s increasingly active civil society. WCS helps train and fund park rangers and offers training and financial support for communities to shift to sustainable agriculture. “It used to be that all of us in the civil society struggled with limited funding sources,” Than Myint says. “But now with the political opening, we’re seeing more funding agencies and organizations coming here and what we hope is that with their help we can expand our activities.”

NGOs and environmental officials in Myanmar’s government published a report last April detailing a rich diversity of wildlife in the country, but also many critically endangered species, including white-bellied herons, now limited to the most remote waterways in the eastern Himalaya; snub-nosed monkeys; black musk deer; pangolin; and Sumatran rhinoceros.

However, chronic data shortages make it exceedingly difficult to quantify Myanmar’s diversity and natural resources. Kevin Woods, a Yangon-based Ph.D. candidate in environmental science policy and management at the University of California, blames rebel activity in particular for the lack of scientific investigations on the borders, where some of the best-preserved ecosystems remain. “It’s not possible to do any sort of survey in Kachin State,” he says. “Apart from the war, the Northern Forest Complex is extremely remote, with almost no roads. Moreover, the government is severely understaffed, underfunded, and it’s difficult for NGOs to get into that area because of the suspicion locals have towards outsiders.”

Similarly, the full extent of Myanmar’s forest resources — including the famous golden teak that historically accounted for much of the country’s timber exports — is difficult to gauge. In a 2011 report, Woods wrote that Myanmar’s government doesn’t collect or publish data that would be necessary for a “deeper analysis and understanding of the forest industry.” The report did conclude, however, that the forest sector has become increasingly corrupt; that governance systems affecting the forest sector are poorly designed, opaque, and subject to manipulation by military regional commanders and ethnic leaders; that the actual source of exported timber is often unknown; and that the influence of Asian countries looking for a stake in Myanmar’s timber trade — including China, India, Thailand, and Bangladesh — has grown as that of the U.S. and the European Union has waned.

The most recent estimates published by the United Nations Food and Agriculture Organization (FAO) indicate that Myanmar’s primary forests occupy 10 percent of the country’s land area, mostly in the northern and eastern parts of the country. That’s a substantial amount, given Myanmar’s sheer size. (It’s the second-largest Southeast Asian country, after Indonesia.) According to the FAO, primary forest covers 35 percent of Thailand. But these figures do not tell the whole story: Thailand’s primary forests are more fragmented, and outside of strictly protected areas they are not as pristine as Myanmar’s, according to Jack Hurd, the deputy managing director for the Nature Conservancy’s Asia-Pacific program. Unlike other Southeast Asian nations, Myanmar also has not experienced the widespread conversion of primary forests to monoculture plantations of rubber, palm, and eucalyptus. 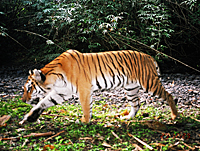 Hurd says that given the lack of infrastructure, particularly roads, Myanmar has been able to avoid the industrial deforestation that has occurred elsewhere in Southeast Asia. “What you see instead is lots of ad-hoc, opportunistic exploitation and deals cut among the Myanmar Timber Enterprise [a government body], state governments, and border logging interests,” he says. “So deforestation isn’t as widespread as it could have been if Myanmar’s borders were exposed to the forces of globalization.”

Jake Brunner, the Mekong program director with the International Union for the Conservation of Nature, in Hanoi, says that Myanmar’s government needs to impose emergency measures to conserve highly threatened areas, including the Irawaddy River delta’s mangrove forests, which have been decimated by villagers making charcoal. But in the long run, he says, forest protections will depend on whether the country’s emerging governance structures can align national environmental goals with local interests.

In the Land of the Maya, A Battle for a Vital Forest

Initial signs look promising, Hurd says. But as a country so poor and isolated that less than 2 percent of its 60 million people owns a cell phone, Myanmar faces many challenges. The main risk is that a Wild West mentality will take hold as companies emboldened by trade liberalization scramble to exploit the most valuable resources.

The experience of once-communist Cambodia is a cautionary tale. After free elections in 1993, much of the country was turned over to foreign timber interests. Within 10 years, 50 percent of Cambodia’s old-growth forests were gone. “Avoiding that is going to require political will, but it’s also going to require the necessary capacity and resources,” Hurd says. “The sooner the international community can help Myanmar’s government and civil society figure out how to implement a sustainable approach to resource management, the better.”