Biochar, the charcoal-like material sometimes touted as a miracle cure for global warming, might first gain economic traction as a weapon against local air pollution, research by the U.S. Department of Agriculture indicates. There is a catch, however: The biochar should be produced from chicken manure.

“We don’t know why, actually,” says Thomas Klasson, a scientist at the USDA’s Southern Regional Research Center in New Orleans. Klasson has led a team exploring the potential of biochar to capture the mercury emitted when power plants burn coal. When deployed as a scrubber, biochar made from chicken manure “removed almost all of the mercury” from a simulated coal emissions stream, Klasson’s team found. “We tried biochars made from turkey manure, almond shells, and cottonseeds, but chicken manure is the best,” Klasson says. 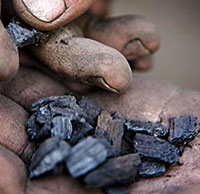 Biochar is produced when plant matter (leaves, trunks, roots), manure, or other organic material is heated in a zero- or low-oxygen environment. The carbon the organic material had previously absorbed via photosynthesis is thus captured in solid form; the resulting biochar can take the shape of sticks, pellets, or dust. When biochar is inserted in soil, the effect is to remove carbon from the atmosphere and store it underground, where it does not contribute to global warming. Biochar also brings agricultural benefits by boosting soil’s fertility and its ability to withstand drought or flooding; it can also rid soil of heavy metals and other pollutants.

Adding biochar to 10 percent of global cropland could sequester the equivalent of 29 billion tons of CO2.

The largest outstanding question about biochar is how much of a difference it can make in slowing global warming and how soon. Johannes Lehmann, a professor of agricultural science at Cornell University and one of the world’s top experts on biochar, has calculated that if biochar were added to 10 percent of global cropland, the effect would be to sequester 29 billion tons of CO2 equivalent — roughly equal to humanity’s annual greenhouse gas emissions.

What researchers still don’t know is how long that buried carbon would remain sequestered from the atmosphere. Also unclear is just how much biomass would have to be turned into biochar to make a meaningful dent in global warming, and what environmental and social impacts this might have — for example, by encouraging the clear-cutting of forests and their replacement by plantations of trees destined for biochar production.

Lehmann and former NASA climate scientist James Hansen have emphasized that they oppose such plantations and other unsustainable practices as a means to produce biochar. Rather, Lehmann says, biochar should be sourced from the massive amount of waste materials that normal agricultural and forestry production methods leave behind: corn stalks, rice husks, tree trimmings, and the like. And as the chicken manure example described above illustrates, biochar could also help dispose of the large amounts of manure currently generated by poultry and livestock operations.

The case for extracting carbon from the atmosphere, via biochar or other methods, may get a prominent boost in April when the UN’s Intergovernmental Panel on Climate Change (IPCC) issues the next installment of its Fifth Assessment Report. A draft copy of the report by the IPCC’s Working Group Three, leaked last week, paints a grim portrait of the global failure to slow greenhouse gas emissions and says that if rapid action is not taken, severe climate and economic disruption will occur. As a result, future generations may well have to devise methods — possibly including the use of biochar — to remove CO2 from the atmosphere.

Some climate activists believe that biochar may offer a more environmentally friendly method of limiting global warming than do conventional forms of geoengineering, such as spraying sunlight-reflecting aerosols into the atmosphere. In the words of author Bill McKibben, founder of 350.org, biochar may enable us to “run the [climate] movie backwards to unmine coal and undrill oil.”

As the amount of carbon dioxide in the atmosphere climbs to 400 parts per million and beyond, and the impacts of climate change become more unmistakable and destructive — rapid melting of Arctic Ocean ice, a rising incidence of extreme weather events — the case for extracting carbon from the atmosphere becomes increasingly compelling. Reducing the world’s emissions of CO2 and other greenhouse gases — the focus of virtually all public discussion and government policy on climate at the moment — remains vital, but as a practical matter that effort only affects how quickly the 400 ppm figure will increase. Turning biomass into biochar and burying it underground effectively withdraws CO2 from the atmosphere; if done at sufficient scale and in combination with aggressive reductions in annual greenhouse gas emissions, biochar thus could help reduce atmospheric concentrations of CO2.

To date, the relatively high price of biochar has been a stumbling block to these ambitions, but biochar’s ability to cleanse contaminated air and soil could help overcome that obstacle. Klasson of USDA points to a rule the U.S. Environmental Protection Agency (EPA) issued in 2011 that sharply limits the amount of mercury that power plants and other industrial sources may emit. Mercury is one of the ten elements or chemicals of most serious public health concern, according to the World Health Organization, which advises that “even small amounts may cause serious health problems” for the nervous, digestive, and immune systems, especially for fetuses and young children. The EPA estimates that its rule will reduce by 90 percent the amount of mercury emitted by coal-fired power plants, the nation’s largest source of mercury pollution.

The EPA rule could thereby give rise to a sizable new market for biochar, suggests Klasson, which in turn would improve the economic viability of other utilizations of biochar. Writing in the Journal of Environmental Management, the USDA scientist calculated that the EPA mandate would create a potential market for 120,000 tons of biochar a year. Since U.S. production capacity for all uses of activated charcoal — a conventional alternative to biochar — is 197,000 tons per year, the EPA’s mandate could expand the effective market demand by roughly 50 percent. Such a dramatic increase in the scale of production for biochar would reduce per-unit production costs, lowering the price of biochar closer to what farmers and carbon markets could bear.

“What farmers will pay [for soil enrichment] is going to be the lowest economic value for biochar,” says Kurt Spokas, a USDA research scientist based at the University of Minnesota in St. Paul. “But if we open up the market to include uses with higher economic value, such as mercury remediation or the production of black carbons for toner cartridges and lead pencils, we could make biochar a going economic enterprise.”

Interest in biochar is especially keen in China. Although the USDA, through its Agricultural Research Service, had been the global leader in biochar research, China “far outspend[s] us now,” says Robert Fireovid, who coordinates biochar research at the service.

Biochar’s ability to remediate polluted air and soil accounts for part of China’s interest. After decades of rapid industrialization and lax environmental regulation, about eight million acres of land — an area the size of Belgium — is too contaminated by toxic metals, fertilizer residues, and other pollutants to grow food, Wang Shiyuan, China’s vice-minister for Land and Resources, said in December. Beyond these extreme areas of contamination, 70 percent of China’s total farmland has experienced lower crop yields due to excessive fertilizer application and soil erosion, according to Meng Jun, the deputy director of the Liaoning Biochar Engineering and Technology and Research Center at the University of Shenyang.

Biochar delivers the greatest agricultural benefits when it is applied to soils that are poor.

All this has endangered food security, long a hot-button political issue in China. Over the past three years, the nation’s imports of corn, rice, and wheat have skyrocketed. A succession of food safety scandals has also rocked China; in 2013, the Food and Drug Authority of Guangzhou, the mega-city in China’s hyper-industrialized south, revealed that 44 percent of rice samples it tested had dangerous levels of cadmium, a heavy metal that can harm the liver and kidneys and cause cancer.

Applying biochar to contaminated rice paddies can substantially reduce cadmium pollution, concluded a two-year study published in the journal BioResources. For the experiment, biochar made from wheat straw was ground into pellets 2 millimeters in diameter and mixed into soil in Jiangsu province that contained high levels of cadmium. The concentration of cadmium in the rice harvested from the test plots was reduced by 45 percent in the first year of the experiment and by 62 percent in the second year. Crop yields were not affected.

Biochar also could address a second environmental challenge in China’s rural areas — the countless heaps of straw, corn stalks, and other crop residues stacked around virtually every village. Farmers often burn this fodder, producing local air pollution and releasing greenhouse gases. Instead, converting the plant material into biochar would reduce such pollution, professor Jun has noted. In addition, when the biochar was added to soil, it improved crop yields more than chemical fertilizers did, with yield differentials reaching 15 percent for peanuts, 7.2 percent for soybeans, and 8.1 percent for potatoes.

The results in China cannot automatically be extrapolated to the rest of the world, however. “You must always remember that not all biochars are the same, and their effects will differ according to what kind of soil is being amended,” said Spokas of the USDA.

Spokas claims to have the world’s most diverse collection of biochars; his lab boasts 225 different varieties, many of which have been sent to him by fellow researchers, entrepreneurs, and enthusiasts. Spokas and his colleagues are doing lab and field tests to determine the properties of the different varieties, including their effects on soil fertility, how stable various types of biochar are in different soils, and how much carbon the different biochars sequester.

As a rule, biochar delivers the greatest agricultural benefits when it is applied to soils that are poor, either inherently or because of pollution. “We’re finding that biochar as a soil amendment tends to be less useful here in the Midwest, because the soil is already so fertile,” says Spokas. Biochar tends to deliver more benefits to “soils overseas, because [the soils] have often been leached of nutrients.”

The big question remains biochar’s effectiveness in slowing or reversing global warming, and that can only be answered by further research and real-world experiments — something the Chinese, at least, seem to understand. After being briefed on biochar in 2010, China’s national leadership made biochar production part of the state Clean Energy program in 2011, according to Genxing Pan of Nanjing Agricultural University. Biochar research is currently being supported by the Chinese Academy of Sciences and the Rural Economic Commission, among other entities.

The U.S. government, by contrast, is winding down its biochar research. Congress has cut the Agricultural Research Service’s budget by 12 percent since 2010, said ARS’s Fireovid. “We’ve closed at least ten laboratories in the last three years,” he added. “The long-term studies we think we need to do on biochar, we just can’t do. We lack the funds.”