This summer, high above the Amazon rainforest in Peru, a team of scientists and technicians conducted an ambitious experiment using a pioneering technology. Deploying a pair of sweeping lasers that sent 400,000 pulses per second toward the ground, as well as an imaging spectrometer that could detect the chemical and light-reflecting properties of individual plants and trees 7,000 feet below, the researchers were able to instantaneously gather a vast amount of information about the unexplored tracts of cloud forest that passed beneath their airplane.

Conceived by Greg Asner, a scientist at the Carnegie Institution for Science, the new system — known as AToMS, or the Airborne Taxonomic Mapping System — has the potential to transform how tropical forest research is 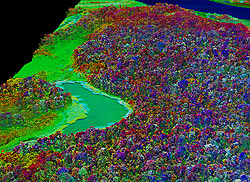 conducted. By combining several breakthrough technologies, Asner and his colleagues can capture detailed images of individual trees at a rate of 500,000 or more per minute, enabling them to create a high-resolution, three-dimensional map of the physical structure of the forest, as well as its chemical and optical properties. In Peru, the scientists hoped to not only determine what tree species lay below, but also to gauge how the ecosystem was responding to last year’s drought — the worst ever recorded in the Amazon — as well as help Peru develop a better mechanism for monitoring deforestation and degradation.

Asner’s new system, a significant advance on the so-called Carnegie Airborne Observatory (CAO) that he originally developed in 2006, could also play a vital role in global forestry in the decades ahead. The technology could help alleviate uncertainty about carbon emissions from deforestation and different forms of forest management, both of which are critical to the emerging policy of REDD (Reducing Emissions form Deforestation and Forest Degradation), a UN program that aims to compensate tropical countries for preserving their forests.

“The whole idea was to measure each of the things plant ecologists measure on the ground to evaluate biodiversity,” said Asner, as he flew over the Amazonian cloud forest. Asner is now helping the National Science Foundation develop an airplane with this suite of monitoring technologies, and is in talks with NASA about equipping a satellite with the system.

The sensors detect dozens of chemical signals and can distinguish individual plant species.

One of the key technologies Asner uses is known as LiDAR, which employs two powerful lasers to blast through canopy vegetation, reach the forest floor, and return a wealth of information about the forest’s structure. Depending on the aircraft’s altitude, sensors can map the forest at resolutions ranging from 10 centimeters to one meter, fine enough to “see” understory shrubs and epiphytes in tree crowns. LiDAR is also very good for measuring aboveground biomass, or the amount of carbon stored in a forest’s vegetation. It can also detect surface elevations to identify watersheds and waterways.

To truly understand an ecosystem, however, scientists need to know more about its characteristics, including aspects that can’t be been with the naked eye. This is where Asner’s CAO really sets itself apart, using newly developed sensors — built by engineers at NASA’s Jet Propulsion Laboratory — that can detect
dozens of signals, including photosynthetic pigment concentrations, water content of leaves, defense compounds like phenols, structural compounds such as lignin and cellulose, as well as phosphorous and other micronutrients — all of which can be used to build signatures to distinguish individual plant species, as well as other measures of forest condition. The result, using the so-called VSWIR Imaging Spectrometer, is a system that can map the chemical and spectral attributes of a forest that may have more than 200 species of trees in a single hectare.

“When leaves interact with sunlight, the compounds bend, stretch, and vibrate at different patterns and rates,” said Asner. “These different rates led to different scattering of light. The spectrometer picks up on this and we’ve been able to deduce chemicals from these signatures.”

But for the CAO to accurately assess biodiversity, Asner’s team has to first do the groundwork by creating a database of the chemical and spectral properties of various plants, which are then fed into the CAO’s library of information on individual plant species. These are then correlated with the data collected by the CAO’s various sensors. In the Amazon, Asner and his team conducted extensive, on-the-ground work to compile information on nearly 5,000 plant species. “We have the best team of tree climbers in the world,” said Asner. “They can climb 75 trees a day, conducting full sampling.”

The aircraft that carries the system allows Asner’s team to map very large areas, sometimes more than 49,000 hectares (120,000 acres) a day. In 2009, using an older, less sophisticated version of the system, Asner mapped 4.3 million hectares of Peru’s Madre de Dios region. Now he is working on a bigger scale: nearly the entire Peruvian Amazon. After this, he goes to Colombia and Panama.

“We’re looking at biodiversity in regions that have never been put down on the science map,” said Asner.