The Leshan Buddha, an ancient statue carved from a cliff in southern China, is slowly dissolving. The giant stone Buddha, the world’s largest, seated with its hands planted on its knees, looks out resolutely over the waters of the Minjiang River and across to Mount Emei, one of the four sacred Buddhist mountains of China. Since being chiseled from a cliff in Sichuan province in the Tang dynasty (8th century), it has for 1,200 years drawn a continuous stream of pilgrims, tourists, and scholars; in 1996, the Buddha was named a UNESCO World Heritage Site.

But this symbol of eternity is slowly corroding. The body of the statue is no longer the reddish color of the surrounding hills, but instead a charred, tombstone gray. Its face is streaky with sooty tears, and its nose blackened. Having withstood the weathering of the ages, the statue is now succumbing to a modern man-made threat. 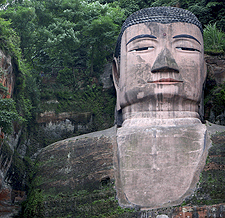 The culprit: Acid rain. When I visited the region this spring, a researcher at a local university told me: “Our ancient heritage is crumbling. The Buddha is a symbol of peace, harmoniousness — and now, pollution.”

Acid rain is a byproduct of burning coal and oil for energy; the combustion process releases sulfur and nitrogen dioxide into the air, which bond with water and oxygen molecules, and then fall to the ground as sulfuric and nitric acid. Acid rain eats away at building exteriors, dissolves paint finishes, and erodes monuments. It poisons farmland and turns lakes into aquatic dead zones. Sulfur dioxide and nitrogen dioxide (SO2 and NOX), two precursors of acid rain, can also contribute to secondary pollution with serious health consequences, including lung disease, heart attacks, and asthma.

Acid rain is endemic across southeast China, where the highest concentration of people, power plants, and factories are located, and it is considered a serious problem in approximately one third of the country. In the western city of Chongqing, said to have the most beautiful women in all of China, the ladies hold aloft lace parasols whose edges are brittle and blackened, thanks to the region’s acidic drizzle.

In the midst of China’s many environmental challenges, from water shortages to carbon emissions to desertification, acid rain has received little international media attention. But the government’s efforts to combat SO2 emissions — long unsuccessful, but recently more promising — are telling.

The United States saw its own severe acid rain problem emerge in the 1970s and 80s, when dangerous drizzle eroded forests and created toxic lakes, most notably in the Northeast and Upper Midwest. Then, with Title IV of the 1990 Clean Air Act, Congress created a “cap and trade” system for SO2 emissions, which included financial incentives for plants to install equipment — i.e., flue-gas desulfurization technology, known in lay terms as scrubbers — to remove SO2 before it left smokestacks. Where possible, U.S. plants switched to low-sulfur coal.

In China, industrial pollution came later, but quickly grew worrisome. The government first began to focus on the SO2 problem in the mid-1990s, when it levied fines on some polluters. In 2001, Beijing included a national target for reducing SO2 emissions in the 10th Five Year Plan, covering 2001-2005. At first, official efforts yielded abysmal results. Beijing vowed to cut sulfur dioxide emissions by 10 percent below 2000 levels by 2005; instead, emissions increased by 28 percent.

To some observers, such failures were taken as evidence that China was not serious about — or worse, not capable of — controlling its fast-growing pollution problem. And today Beijing continues to fall short of meeting many of its own green targets, as The New York Times reported this July, citing data released by China’s own Ministry of Environmental Protection.

But there is a glimmer of hope: Between 2006 and 2009, China’s sulfur dioxide emissions decreased more than 13 percent, even as construction of new coal-fired power plants expanded rapidly. Considering the government’s 15-year struggle, this sign of recent progress is significant.

A key question now is whether this relative success is an anomaly, or whether it is sign that China is slowly gaining control over industrial pollution and can be expected to meet more of its own emissions targets in the future. (SO2 is one of two main contributors to acid rain; the other, NOX, has not yet been a focus of government programs, although some Chinese scientists are now calling for it to be targeted in future efforts.)

Between 2006 and 2010, China’s sulfur dioxide emissions decreased more than 13 percent.

Near such major cities as Beijing and Shanghai, sulfur dioxide emissions remain high, but are slowly declining. One reason is that the government has shuttered hundreds of small, inefficient coal-fired plants, which had little money for technology upgrades and were difficult to regulate. Larger plants, originally built without scrubbers, have been required to retrofit facilities since the mid-2000s. And since 2007, all large state-owned factories and coal-fired power plants with SO2 scrubbers have been required to install emissions-monitoring equipment to make sure the scrubbers are in fact turned on and operating correctly.

In a country where cutting corners on cost and compliance has long been the norm, “this is very important,” explains Zhang Zhongxiang, an adjunct professor at the Chinese Academy of Sciences and Peking University and a fellow at the East-West Center. “Otherwise the government gives you money in exchange for installing equipment. But maybe then you don’t really operate it. After all, [running scrubbers] will increase the power production costs by about 10 percent.”

Today, large factories and power plants have control rooms where operators watch several computer screens that provide detailed real-time data on boiler operation, fuel use, air flow, temperature, and other metrics. More recently, an additional screen has given data on real-time sulfur dioxide emissions. Significantly, the emissions-monitoring systems of China’s largest power plants and factories are now hooked up to a central monitoring center; a national registry listing which plants have certified sulfur-scrubbing equipment has also been created.

“The monitoring equipment is a critical part of overall enforcement,” says Deborah Seligsohn, a Beijing-based principal advisor to the World Resources Institute’s China Climate and Energy Program. “The point is not to identify the chief offenders, but to ensure you don’t have so many offenders — they know they are being watched so they
use their equipment as they are supposed to.”

To support its work curbing SO2 emissions, the Chinese government has received loans from the Asian Development Bank and technical assistance from the U.S. Environmental Protection Agency (EPA), which has shared lessons from the U.S. experience in SO2 emissions control. “Where they are today is where we were in late 1980s or early 1990s,” says Jeremy Schreifels, a policy analyst for the EPA and liaison to China on SO2. Since 2006, Schreifels’ team has provided advice on SO2 controls, installing and maintaining equipment, and training personnel in monitoring and managing data.

What the current picture reveals is one of partial progress, with some 220 major Chinese cities still suffering from acid rain. “It’s a learning experience,” says Zhang Xuehua, a consultant for the EPA and a former official with the Chengdu Environmental Protection Bureau, who understands firsthand the pitfalls that have plagued China’s pollution-control efforts in the past.

As Zhang Zhongxiang puts it: “From the company’s perspective, they have every incentive not to comply. They are always trying to save money and shut down [pollution-control] systems. Now at least there is a better checking point for the government to make sure they are always working.”

This stepped-up monitoring system for SO2, the first of its kind in China, is a sign that the country has begun to establish a culture of monitoring and verification. The technology is not infallible — there’s still ample room for both human error and corruption — but it is a clear step toward tightening enforcement. Could similar monitoring systems one day be adapted for curbing CO2 emissions, if carbon capture technology becomes affordable and widely available? “Yes,” says Qi Ye, director of the Climate Policy Institute at Tsinghua University in Beijing; “This work [on SO2] is part of building a necessary foundation.”

Or, as Seligsohn says, “The key lesson is China can do this. They decided to do this, and did it without any particular external pressure.”