In Chinese folklore, a dragon symbolizes strength. It is an apt icon for a nation whose rise as an economic superpower has been nothing short of meteoric.

While China’s stunning economic advances have come at significant environmental cost, the boom has been a plus in a few realms. The country is investing avidly in green technologies, such as solar energy and high-tech car batteries. It has also undertaken an ambitious national reforestation program, while cracking down on illegal forest clearing and logging inside its borders. According to the UN Food and Agricultural Organization, forest cover in China, including large areas of timber plantations, increased from 157 million hectares in 1990 to 197 million hectares in 2005.

In its fervor to secure timber, China is increasingly seen as a predator on the world’s forests.

Counter-intuitively, the expansion of Chinese forests has occurred at the same time the country has been developing an immense export industry for wood and paper products. China is now the “wood workshop for the world,” according to Forest Trends, a Washington, D.C.-based think tank, consuming more than 400 million cubic meters of timber annually to feed both its burgeoning exports and growing domestic demands. Production of paper products has also grown dramatically in China, doubling from 2002 to 2007.

But the rise of the Chinese dragon has a darker side. As much as half of the timber and much of the paper pulp consumed by China is imported, primarily from tropical nations or nearby Siberia. In and of itself, there is nothing wrong with this — China has every right to grow economically and seek the kind of prosperity that industrial nations have long enjoyed. However, in its fervor to secure timber, minerals, and other natural resources, China is increasingly seen as a predator on the world’s forests.

China is now overwhelmingly the biggest global consumer of tropical timber, importing around 40 to 45 million cubic meters of timber annually. Today, more than half of all timber being shipped anywhere in the world is destined for China. Many nations in the Asia-Pacific region and Africa export the lion’s share of their timber to China.

China faces three criticisms by those worried about the health and biodiversity of the world’s forests. First, the country and its hundreds of wood-products corporations and middlemen have been remarkably aggressive in pursuing timber supplies globally, while generally being little concerned with social equity or environmental sustainability. For instance, China has helped fund and promote an array of ambitious new road or rail projects that are opening up remote forested regions in the Amazon, Congo Basin, and Asia-Pacific to exploitation. Such frontier roads can unleash a Pandora’s Box of activities — including illegal colonization, hunting, mining, and land speculation — that are often highly destructive to forests. 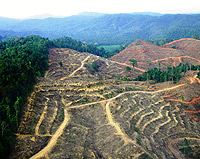 Courtesy of William Laurance
Vast expanses of Sumatran rainforest are being turned into paper pulp.

China is also a major consumer of wood pulp, which is helping to drive large-scale deforestation in places like Sumatra and Borneo. During a recent visit to Sumatra, I witnessed the felling of large expanses of native rainforests, which are being chopped up and fed into the world’s largest wood-pulp plant, located nearby, and replaced by monocultures of exotic acacia trees.

Second, China, in its relentless pursuit of timber, almost exclusively seeks raw logs. Raw logs are the least economically beneficial way for developing nations to exploit their timber resources, as they provide only limited royalties and little employment, workforce training, and industrial development. As a result, most of the profits from logging are realized by foreign timber-cutters, shippers, and wood-products manufacturers. A cubic meter of the valuable timber merbau (Intsia bijuga), for instance, yields only around $11 to local communities in Indonesian Papua but around $240 when delivered as raw logs to wood-products manufacturers in China, who profit further by converting it into prized wood flooring.

Finally, China has done little to combat the scourge of illegal logging, which is an enormous problem in many developing nations. A 2011 report on illegal logging by Interpol and the World Bank concluded that, among 15 of the major timber-producing countries in the tropics, two-thirds had half or more of their timber harvested illegally. Globally, economic losses and tax and royalty evasion from illegal logging are thought to cost around $15 billion annually — a large economic burden for developing nations. Forest ecosystems suffer serious impacts as well, because illegal loggers frequently ignore environmental controls on cutting operations.

One report said that China imports 16 to 24 million cubic meters of illegal timber each year.

According to a 2010 analysis by Chatham House, a respected UK think tank, illegal logging is slowly declining globally but this is despite, rather than because of, China’s influence. The report concluded that, from 2000 to 2008, China imported 16 to 24 million cubic meters of illegal timber each year. This is an incredible figure — twice the total amount imported annually by leading industrial nations.

Around a third of Chinese timber imports are ultimately exported, as furniture, plywood, flooring, disposable chopsticks, and other wood products. European countries, the U.S, and Japan are the biggest importers, with consumers there often unaware of the illicit origin of many wood products from China.

When it comes to illegal or predatory logging, it has not been easy to get China’s attention. Stories about illegal logging rarely penetrate the Chinese news media. For example, in 2006 the Association for Tropical Biology and Conservation (ATBC), an international scientific organization, held its annual conference in Kunming, China. At the time I was president of the ATBC, and I spoke at length to Chinese journalists about the problem of illegal logging and the risks it posed for Chinese exporters. To my knowledge, not a single story about my concerns was reported in China, even though I emailed the journalists a summary of my comments translated into Mandarin Chinese.

Outside China, the story is different. Awareness of the rapacious nature of Chinese timber interests is growing, especially since a 2005 report by a green group, the Environmental Investigation Agency, that detailed massive illegal logging and timber theft in the Indonesian state of Papua. Smuggled timber from Papua arrived in mainland China via international criminal syndicates involving corrupt Indonesian insiders, Malaysian loggers, and Singaporean shippers. Other groups, such as the World Resources Institute, Forest Trends, WWF, and Greenpeace, have laid similar claims against China. With mainstream organizations such as the World Bank, Interpol, and Chatham House joining in, what began as murmurs of concern is becoming a loud clamor for change.

Efforts to combat illicit timber imports are finally beginning to gain some traction in China.

This is a dangerous situation for Chinese businesses and exporters. Influential environmental organizations in Europe and North America have their eye on China. For example, the Rainforest Action Network (RAN) has waged a campaign urging corporate customers to avoid paper and pulp products originating from two of Indonesia’s largest corporations, Asian Pulp & Paper (APP) and APRIL, which are felling large expanses of native rainforest for wood pulp. The pulp and paper have been used by Chinese manufacturers to make branded products for scores of well-known companies around the world. Some of those companies — including Gucci, Scholastic, Hachette, and Tiffany & Co. — have switched to recycled and sustainably certified paper products. As of this year, other companies — including Prada, American Greetings, Marc Jacobs, and the Rupert Murdoch-owned HarperCollins publishing — are continuing to use APP or APRIL paper products supplied by Chinese manufacturers, according to RAN.

Such actions could have a big impact on Chinese exports. Boycotts initiated by green groups can have a major influence on consumer preferences and have forced some of the largest retail chains in North America and Europe, such as Walmart and Ikea, to limit products sourced from old-growth forests. Meanwhile, eco-certified timber products accounted for $7.4 billion in sales in the U.S. alone in 2005, and were expected to grow to $38 billion there by 2010. At some point, Chinese companies will buck the trend toward sustainable logging at their peril.

Adding teeth to such consumer actions are tougher laws and initiatives in industrial nations. In particular, new provisions to the Lacey Act in the U.S., and the European Union Timber Action Plan in Europe are increasingly holding corporations that import illicit timber products responsible for their actions.

One senses that efforts to combat illicit timber imports are finally beginning to gain some traction in China. The relevant government agencies are now engaged, and the country has commissioned an analysis of its role as an importer of illegal timber and released draft guidelines to improve sustainability of its timber-importing corporations. It also recently hosted the Asia Forest Partnership Dialogue 2011, in Beijing, designed to assess progress in efforts to combat illegal logging in Asia over the last decade.

However, China still has no national action plan or legislation to prevent the import of illegally sourced timber, and no formal trade arrangements with major timber-producing countries designed to improve enforcement. Despite dominating the global timber market, Chinese wood-products corporations feel little pressure from buyers to improve the legality of their timber products and consider it largely unimportant to their future competitiveness, according to the Chatham House report.

The bottom line: China’s efforts to limit the environmental impacts of its burgeoning timber imports are still mostly lip-service, with little practical impact.

Check the labels when you shop for any wood or paper products. If it says, “Made in China,” be wary of the dragon, and think twice before buying.