When her latest electricity bill arrived, Melbourne homeowner Roslyn Guy framed it for proud display. Her $5,000 (Australian) investment in a rooftop solar system on her beachside home on Australia’s southeast coast had covered her steep quarterly bill and then some, banking $157 in credit for the power fed into the grid over the system’s first three months of operation. 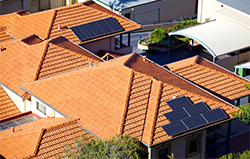 Although Guy’s motives in going solar were more long-term environmental than short-term financial, she’d done the numbers and figured the system would pay for itself within 10 years — maybe earlier given rapidly emerging battery technologies, which would allow her to bank energy captured during the day to draw on in the evening, when grid power is most in demand and most expensive. Her plan was to lock in a clean, cheap power supply in time for her looming retirement, but at this rate she’d break even quicker than she’d bargained.

She was, therefore, a bit deflated by the next piece of correspondence from the power company, a note advising that it had mistakenly paid her — and an undisclosed number of other momentarily happy customers — 33 cents per kilowatt-hour for the energy they had generated, when the rate had been lowered to a mere 8 cents as over-subscribed incentive schemes were pared back. Guy got to keep the bungled bonus, but braced for much more modest returns in future bills.

Today, 1.4 million Australian homes have photovoltaic panels on their roofs.

The episode provides an apt footnote to the wild ride of Australia’s vibrant domestic solar scene since it started powering up in 2008. A decade ago, only a few thousand homes in the country had solar systems. Today, 1.4 million Australian homes have photovoltaic panels on their roofs; 182,000 new solar PV systems were installed last year alone. “The rollout of residential power in Australia is unparalleled in the world,” says Ric Brazzale, a renewables analyst at Green Energy Markets.

It’s a landscape experts say is potent with lessons about how to make — or break — a renewables market, as illustrated in these graphs tracking solar energy growth against various incentive schemes. In the end, solar power technology has seized its place in the sun as a serious and sustainable player in Australia. But analysts disagree furiously about what the Australian experience teaches about the merits of how best to get to a renewable energy future.

A report published last month by a respected public policy think tank argued that the costs of Australia’s solar boom will outweigh the benefits to the tune of $9 billion by the time solar incentives are phased out in 2028. Most of that money will come from other consumers in the form of financial incentives for solar power. “It’s true the schemes have reduced emissions but at a very high price — we could have found much cheaper ways to tackle climate change,” co-author and Grattan Institute Energy program director Tony Wood said in a statement launching the report.

His analysis ignited scathing critiques, with University of Queensland economist John Quiggin arguing it was so “totally wrong” it should be retracted, and solar champions dismissing it as desperate old energy railing against the inevitable.

The heat and fury is unsurprising given the stakes. Although the total capacity of the solar sector in Australia is still modest — 4,200 megawatts, or 2.1 percent of total electricity generation — the sheer numbers of household players makes it a proving ground for innovations in solar technology, design, and marketing. As these developments begin to empower citizens — even entire rural communities — to wean off the centralized grid, it offers a glimpse of the next chapter of the solar story.

In two states, aggressive policy support has pushed saturation levels of home solar to as high as 40 percent.

Unlike many international markets, the Australian solar photovoltaic scene is predominantly residential, with commercial and large-scale solar installations only now gaining traction.

Household enthusiasm for solar in Australia boomed courtesy of a two-year windfall era, beginning in late 2009, of generous feed-in tariffs, under which the states and territories agreed to purchase renewable energy produced by homeowners at up to 60 cents per kilowatt-hour.

“The initial setting of feed-in tariffs, at a time when solar PV installations were minimal, was deliberately generous,” explains Quiggin. He said that the tariffs, designed to encourage households to invest in renewables, led to far more homeowners installing PV panels than anticipated. As a result, one in five Australian homeowners has installed solar energy panels, the highest penetration of PV panels in the world. In the states of Queensland and South Australia, aggressive policy support has pushed saturation levels of home solar in suitable owner-occupied dwellings to as high as 40 percent.

By 2012 the various states were scrambling to scale back the incentives. One equitable step, says Quiggin, would have been to reduce the feed-in tariff to the retail price of grid energy — around 22 cents. But the utilities had overinvested in grid expansion in anticipation of customers continuing to buy coal-generated electricity. Saddled with those expenses, the utilities lobbied successfully to reduce the feed-in tariffs to the wholesale price paid to generators, Quiggin said.

Australia has so much coal — more than 86 per cent of the nation’s power still comes from fossil fuels — that it has some of the lowest wholesale electricity prices in the world. Yet the retail price of electricity ranks among the highest, chiefly as a consequence of the network costs required to maintain its expensive and expansive old coal-dominated power grid. It’s the fallout of “the catastrophic mess made of electricity policy, bad decisions back in the 1990s when no one was thinking about solar at all,” says Quiggin.

So it is that now solar owners get paid 5 to 8 cents per kilowatt-hour for their power, far less than the retail price of grid energy. The boom cycled into a bust, with small-scale solar installations slowing significantly, last year finishing at half what they were at the 2011 peak. “We’re now just getting to some sort of equilibrium,” Brazzale says.

The readjustments mean that the gap between what a customer gets paid for the solar power they export to the grid compared to what they pay for Australia’s high-priced centralized electricity is the largest in the world. Recognizing that solar system owners now have little incentive to sell their power, a wave of companies are starting to roll out affordable batteries and storage to encourage homeowners to keep and consume the energy they collect.

Brazzale is betting that by 2030, half of Australia’s homes will have solar power, and that solar energy installations this year will be the highest ever — 1,058 megawatts — as utility-scale solar power stations and commercial players pick up the domestic market slack.

This comes despite 14 months of inertia in the renewable sector as a consequence of the conservative federal government’s ambivalence on resetting renewable energy targets, a delay that Quiggin estimates killed off 8,000 kilowatt-hours of renewables before a lower, revised target for 2020 was finally set last month.

The current government of Prime Minister Tony Abbott has a record of being cool on climate action. It axed the nation’s unpopular carbon pricing system — introduced by the previous Labor government — and dismantled the expert Climate Commission and slashed funding for the Australian Renewable Energy Agency. Abbott once opined that human-induced climate change was “crap,” though he says he now takes it “very seriously.”

Prevailing political winds aside, it’s hard to imagine a country with a more auspicious set of conditions for solar power: plentiful sunshine (Australia has the highest average solar radiation per square meter of any continent) and sprawling, wealthy cities populated with detached housing.

High home electricity bills have also been a potent driver of Australia’s domestic solar boom, particularly in struggling rural and regional areas and in new suburbs. The solar industry got another boost, even as government incentives closed down, when the price tags on PV systems crashed, largely courtesy of developments outside Australia. Incentives in pace-setting nations like Germany and Spain produced economies of scale that have fueled the Australian boom, with renewables experts declaring the domestic solar market was well beyond grid parity three years ago.

Melbourne-based solar impresario Jeremy Rich, who last year sold his successful installation business to U.S. giant SunEdison, says “when we started the business 12 years ago, solar was $12 a watt, now it’s $2 a watt.” Premium-grade domestic systems have a price tag in the $5,000-$6,000 range. Payback times vary with state incentives and geography, from just over four years in the hot and steamy Northern Territory, to almost 11 years in temperate, southernmost Tasmania.

‘The government in some sense has done its best to kill the industry and failed.’

“People feel it is more expensive now to go solar because they’re not getting the [government] rebate,” says Rich. “But who cares? It’s [still] cheaper.” His business, Energy Matters, a major installer of solar PV systems, is now marketing solar leasing schemes in which customers buy the power generated on their roofs, but don’t own the panels. It’s a common practice in parts of the U.S., but a novelty in Australia, and representative of the kind of seismic shakeup being predicted by solar power analysts.

Blessed with lots of sun and keen to cut its reliance on imported oil, Hawaii has moved to the forefront of residential solar installations in the U.S. But financial and technical hurdles are slowing the state’s drive to generate 40 percent of its electricity from renewable energy by 2030. READ MORE

“Consumers here don’t understand this yet,” says Rich. “We’re trying to educate the market, and people are stuck in the mindset that they need to buy the panels. We put the panels on your roof, but we own them and we sell you the power for 20 or 30 percent cheaper than on your [old energy] bill. The risk is all on us.” Rich says SunEdison’s venture onto the Australian scene signals confidence in its potential despite all the political uncertainty and the muscular posturing of old-school energy.

In April, a report by the World Wildlife Fund, in collaboration with the Australian National University, argued that with the prices of solar and wind technology falling so dramatically, Australia was well placed to reduce emissions at low cost — sourcing 100 percent of its energy from renewables by 2050 without depressing economic growth.

A new survey identifies solar energy as the most popular source of electricity in Australia, with solar panels gaining support from 87 percent of respondents. “There are a bunch of feel-good factors that go with solar,” says Quiggin. “You have more than a million people out there thinking they are doing the right thing. It’s made the politics of attacking renewables much more difficult than the current government anticipated.”

Giles Parkinson, editor of the clean technology and climate website Reneweconomy.com.au, wrote in The Guardian last month that Australia’s old-energy powerhouses were signaling a shift in attitudes and are talking of a future dominated by solar and microgrids.

“Where once [leading power retailer] AGL energy demonized solar tariffs as a ‘scam,’” wrote Parkinson, “it is now offering to buy a solar system for its customers and stick it on their roof even buy you a battery system. … Solar has won. It’s just that some people don’t know it yet.”

“You can never tell with policy,” he says. “But I would say the government in some sense has done its best to kill the industry and failed.”

Correction, June 18, 2015: An earlier version of this story incorrectly stated the total electricity-generating capacity of the solar sector in Australia. It is 4,200 megawatts.