When Brian Schwartz, a Johns Hopkins University epidemiologist researching the public health impacts of hydraulic fracturing, read about an environmental group that uses satellite imagery and aerial photography to track environmental degradation, he was intrigued. 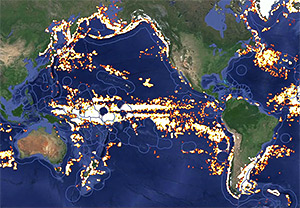 This image, based upon transponder data sent to satellites, shows locations of fishing vessels across the globe. SKYTRUTH/GLOBAL FISHING WATCH

It was the summer of 2013, and the group, SkyTruth, had just launched a crowdsourcing project on its website to map fracking activity in Pennsylvania. The site provided volunteers with U.S. government aerial images from across the state and a brief tutorial on how to identify fracking locations. Within a month, more than 200 volunteers sorted through 9,000 images to pinpoint 2,724 fracking wellpads. Schwartz ended up using this data in a study published last October in the journal Epidemiology, showing that women living near hydraulic fracturing sites in 40 Pennsylvania counties faced a significantly elevated risk of giving birth prematurely.

That’s precisely the sort of result that John Amos, SkyTruth’s president, envisioned when he founded the group in 2001. He has since become part data analyst, part environmental advocate, and part satellite-imagery proselytizer as he looks for ways to use remote sensing to call attention to little-noticed environmental damage. This month, SkyTruth’s website is displaying a map showing the global prevalence of flaring, the wasteful and carbon-spewing oil industry practice of burning natural gas and other drilling byproducts. Through most of December, SkyTruth and another satellite-focused nonprofit, Moscow-based Transparent World, displayed images of a burning oil platform and a 2,300-barrel oil slick in the Caspian Sea. The platform’s owner, Azerbaijan’s state-owned oil company, SOCAR, denied that any spill had occurred.

SkyTruth’s motto, displayed on its website, is, ‘If you can see it, you can change it.’

SkyTruth’s defining moment came in 2010, when Amos — analyzing satellite photographs — sounded the alarm that the Deepwater Horizon oil spill in the Gulf of Mexico was far larger than the petroleum company, BP, and the U.S. government were acknowledging.

“If you can see it,” says SkyTruth’s motto, displayed at the top of its website, “you can change it.”

One indication of SkyTruth’s influence is a cautionary headline that appeared after SkyTruth formed a partnership with Google and the nonprofit Oceana in November 2014 to launch a system called Global Fishing Watch, which uses the satellite transponders found aboard most large fishing vessels to track the activities of the world’s fishing fleets. “Big Brother is watching,” warned World Fishing & Aquaculture, a trade journal.

That admonition could be extended to all the extractive industries — oil and gas, mining, logging, and fishing — whose operations can be tracked by remote sensing. A growing number of governments now conduct environmental observation by satellite, including Brazil, which monitors deforestation in the Amazon. And environmental groups now commonly use remote sensing tools. One prominent example is Global Forest Watch, a system launched two years by Washington-based World Resources Institute to monitor logging and fires in the world’s forests. Russia-based Transparent World employs satellite imagery for many purposes, including monitoring of protected areas and observing the impacts of dam construction.

Amos, 52, says he considered himself an environmentalist even while he spent a decade working for oil and gas companies as a satellite imagery analyst looking for drilling sites. He quit in 2000 to start a non-profit that would apply his skills to environmental protection. For years he ran SkyTruth from the basement of his Shepherdstown, West Virginia home on an annual budget of less than $100,000, and he still speaks of “begging” satellite images from commercial providers.

SkyTruth has benefited from the explosion in satellite imagery and other digital technologies in the last 15 years.

Although SkyTruth has expanded in recent years to eight employees supported by a $600,000 budget, it is still tiny, particularly compared to the U.S. government’s massive satellite resources. Nevertheless, SkyTruth has delved into realms that the government has avoided. One reason, Amos says, is that satellite imagery analysis is so unfamiliar that “nobody has known what to ask for” — thus, one of SkyTruth’s missions is to show what’s possible. Its usual method is to release a trove of environment-related data, then invite researchers and crowdsource amateurs to analyze it.

SkyTruth has benefited enormously from the explosion in the last 15 years in satellite imagery and other digital technologies. When Amos started SkyTruth, a single Landsat satellite image cost $4,400; now the entire U.S. government collection— more than 4.7 million images and growing daily— is available free of charge. Not only have satellites and satellite imagery become cheap, but the capacity to analyze, duplicate, send, and store satellite data has expanded by orders of magnitude. In fact, satellite technology is now considered a subset of a larger field, geospatial intelligence, which has tens of thousands of practitioners around the world employing an array of optical, thermal, radar, and radiometric remote sensing tools.

“It’s evolved from a problem of getting imagery to deciding which image do I want to pluck out of this massive cloud,” Amos told me.

The finding by Schwartz, the Johns Hopkins epidemiologist, on premature births suggests a correlation between fracking and poor human health; but because the chemical trigger wasn’t identified, the link isn’t regarded as causal. From more than 1,000 available chemicals, fracking operators select a dozen or so that fit the geological challenges of a particular site. People living near the site typically can’t find out whether their wells and aquifers have been contaminated because the cost of testing for all 1,000 chemicals is prohibitive, and operators treat each site’s chemical recipe as a trade secret.

The quandary led Amos to venture beyond satellite imagery into the larger field of geospatial data. Along with several better-known environmental groups, SkyTruth argued for disclosure of the recipe used at each fracking site. Two industry lobbying groups, the American Petroleum Institute and America’s Natural Gas Alliance, defused mounting Congressional pressure for mandatory disclosure by launching a website, FracFocus, where operators could post their recipes voluntarily. But soon after the site’s launch in 2011, users found that information posted on it was entered in the wrong field, misspelled chemical trade names, or omitted key facts deemed proprietary. The site thwarted researchers by requiring postings in a format that computers couldn’t read. Although 23 states require fracking companies to use FracFocus to disclose their chemical use, a 2013 Harvard Law School report concluded that FracFocus’ “fails as a regulatory compliance tool.”

SkyTruth’s lead programmer, Paul Woods, devised a way around some of FracFocus’ barriers by writing software that “scraped” all the chemical data from the tens of thousands of reports posted on the site. Then he posted it in a database on SkyTruth’s website. In addition, under pressure from SkyTruth, other environmental groups, and an Energy Department advisory board, FracFocus agreed to make its data available in machine-readable form beginning in May 2015. These developments have yielded more and more information for researchers, such as Schwartz, who are investigating fracking’s health impact.

“This is a very wonky issue that makes people’s eyes glaze over,” Amos said. “But it’s where the rubber meets the road in terms of understanding if fracking is bad for you.”

The first time that SkyTruth attracted national attention was in April 2010, when Amos received a Google alert that an oil platform called Deepwater Horizon, 50 miles off the Louisiana coast, had exploded and burned. Amos knew explosions like this one were uncommon and usually led to spills.

He began searching for satellite photos, but the first ones he found were obscured by clouds. Meanwhile, BP, which leased the rig, and the Coast Guard, echoing BP, maintained that the ruptured well beneath the rig was leaking oil at a rate of 1,000 barrels a day— a major spill but perhaps not a catastrophic one. The number was vital, for it would help determine the scale and strategy of the leak containment effort, the eventual cost to BP in fines and damages, and the scope of preparations for the next spill.

It took Amos six days to acquire clear images. His first thought, he says, was: “Oh my God! This is much bigger than anybody realizes.” He calculated that the slick was 50 miles long and covered 817 square miles. He outlined the slick, along with his calculations, and posted both on SkyTruth’s website.

Within a day, Ian MacDonald, a Florida State University oceanographer and oil slick authority, notified Amos that the leak’s flow rate was much bigger than a thousand barrels a day. Using Amos’ calculations of the slick’s size and conservative assumptions about its thickness, MacDonald concluded that it was “not unreasonable” that the leak was 20 times BP’s initial estimate. Undermined by SkyTruth’s numbers, the National Oceanic and Atmospheric Administration conceded the next day that BP’s initial estimate was too low: over BP’s public objections, NOAA revised the government estimate to 5,000 barrels a day. Two months later, — prodded, in part, by SkyTruth — government scientists concluded that the initial flow rate was 62,000 barrels a day, 62 times BP’s initial estimate.

SkyTruth has also affected the course of mountaintop removal coal mining. Appalachian states have issued hundreds of permits for mountaintop removal mines, but they’ve rarely checked to see whether the mines have stayed within the permitted boundaries. Permits are supposed to be issued only after assessing impacts on downstream waterways, and a study of ten West Virginia counties published in 2004 by the state’s environmental protection department found that nearly 40 percent of mines in ten counties were situated outside permitted locations.

Acting on a request from Appalachian Voices, a North Carolina-based nonprofit that opposes mountaintop removal mining, SkyTruth devised a technique for identifying the mines from satellite images, then mapped their growth over three decades and posted the results on its website in 2009. The information was used in six peer-reviewed academic articles, including a Duke University study that found that once five percent of a watershed is mined, water quality in its rivers and streams usually fails to meet state standards. That study in turn provided empirical backing for the U.S. Environmental Protection Agency’s 2011 revocation of a mine permit in West Virginia that had been issued by the U.S. Army Corps of Engineers. The decision marked the first time the EPA had ever reversed a coal mine’s permit under the Clean Water Act.

In search of images that tell environmental stories, SkyTruth pays close attention to news reports, but occasionally it finds stories of its own. One example is what is probably the Gulf of Mexico’s longest-running commercial oil spill, at the site of a rig destroyed by an underwater mudslide during Hurricane Ivan in 2004. The slide buried 28 wells on the sea floor under 100 feet of mud, which made sealing them extremely difficult. The rig’s owner, Taylor Energy Company, went bankrupt trying. Amos discovered the leaks in 2010 while studying Hurricane Katrina’s impacts, and has been sounding an alarm ever since. The leaks have trickled steadily into the Gulf’s waters since 2004 at a rate Amos estimates at between one and 20 barrels a day, creating a slick that is sometimes 20 miles long. The wells are ten miles offshore in federally managed water, but no federal agency has tried to seal the leak.

Given the controversial issues SkyTruth has been involved with, the group has attracted surprisingly little criticism, perhaps because so much of its work is grounded in visual data — for SkyTruth, seeing really is believing. A notable exception occurred in 2009 when Amos testified at a U.S. Senate subcommittee hearing on the under-appreciated risks of deepwater oil drilling. Senator Mary Landrieu, a Louisiana Democrat, attacked Amos for overlooking the oil industry’s safety record and economic benefits. “You do a great disservice by not telling the American people the truth about drilling and putting it in the perspective it deserves,” Landrieu told Amos.

Landrieu didn’t give Amos a chance to respond, but, as it turned out, he didn’t have to. The BP spill occurred five months later.