This September 1 is the 100th anniversary of a landmark event in the history of biodiversity. On that day in 1914, at about one o’clock in the afternoon, Martha — the last surviving passenger pigeon — died at the Cincinnati Zoo. It is extraordinary to know with virtual certainty the day and hour when a species ceases to be a living entity. And it was a stunning development because less than half a century earlier, the passenger pigeon had been the most abundant bird in North America, if not the world. 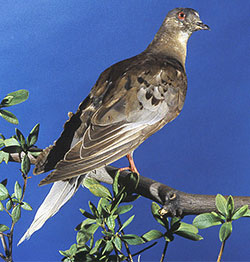 As late as the 1860s, passenger pigeons had likely numbered in the billions, and their population was neither evenly distributed across the landscape nor in any way subtle. These birds had a propensity for forming huge aggregations that are difficult to imagine today. John James Audubon, America’s best-known student of birds, recorded a flight of passenger pigeons along the Ohio River in Kentucky that eclipsed the sun for three days. Other accounts, written over the course of three centuries and in several languages, testify to the birds darkening the sky for hours at a time over the major cities of the eastern third of the United States and Canada.

At Fort Mississauga, Ontario (located at Niagara on the Lake, about 80 miles from Toronto) in early May of around 1860, Ross King, a major in the British army, witnessed and described in great detail a movement of passenger pigeons that has been calculated at more than two billion birds and, depending on how fast they were flying, could have been as many as 3.7 billion. Yet by 1890, there were probably no more than several thousand of the pigeons left, and the last wild bird was shot on April 3, 1902 in Laurel, Indiana.

The rapidity with which this bird’s population went from billions to none was, I believe, unprecedented. And it holds some important lessons today for a world where increasing numbers of species are becoming extinct.

At the time of Martha’s death, the depletion of so much abundance in such a short time was difficult for people to accept and explain. There were the deniers who claimed the hordes of pigeons all moved to South America where they changed their appearance to elude their pursuers. Some, like Henry Ford, accepted their extinction but thought the birds had drowned in the Pacific Ocean as they fled to freedom. More plausible theories included disease, which although not impossible is without any evidence at all, as large numbers of dead birds were never found (unlike caves today filled with dead bats, the victims of white-nose syndrome).

The best evidence is that the bird was “simply” slaughtered into oblivion. The introduction and expansion of the telegraph and railroad beginning in the 1840s meant that wherever the birds were observed the information could be distributed quickly and widely. This enabled hunters from all over to converge on such locations, and the proximity of rail stations meant the pigeon corpses could be easily conveyed to the burgeoning markets of the Midwest and East. These markets sustained anywhere from 600 to 3,000 hunters who did nothing but chase the birds throughout the year wherever they appeared. Their efforts were augmented by local hunters, who also took advantage of this fortuitous source of revenue.

Habitat loss played a role in the extinction as well, but only indirectly. There was still plenty of forage to support the birds, but logging and the expansion of agriculture reduced the areas where the birds could congregate and made them more accessible to hunters.

Of course, not every one of the billions of birds were shot or netted. Think about the links in the chain of life. Some of the pigeon nesting concentrations were incredibly large: The 1871 Wisconsin nesting spread across 850 square miles and likely involved 136 million adult birds. But the shooting, burning, cutting of nesting trees, and other disruptive practices used by hunters caused many pigeons to abandon their nests before eggs were laid or hatched, or chicks were fledged. The chicks, or squabs, were highly coveted themselves and barrels were filled with them. Consider that passenger pigeons nested once a year and laid a single egg. Thus with tremendous anthropogenic mortality and few if any young being produced, the collapse in population begins to become understandable. Those adults that eluded human pursuers eventually aged and met the fate of all organisms.

What drove the slaughter was the abundance of pigeons, which made them cheap.

What drove the slaughter was the abundance of the pigeons, which made them cheap. They were the least expensive terrestrial protein available. Birds could be purchased for pennies a piece. In some places, the birds were worth nothing, and they were fed to pigs or simply discarded as garbage. In the last big nesting in 1878, one eyewitness reported that the pigeons were used to fill potholes in the road.

By 1900, there were three captive flocks all located in the Midwest. It is not known when Martha was born but she hatched either in the Milwaukee or Chicago flock. In either event, she was certainly descended from the Milwaukee birds and lived for a while in Chicago. From there, she was sent in 1902 to the Cincinnati Zoo where she shared quarters with a small flock, including a male named George. (The zoo channeled the first presidential first family, the Washingtons, in their naming of passenger pigeons.)

As time elapsed, even with some successful breeding, the captive pigeons declined until the only two remaining were George and Martha. On July 10, 1910, George died, leaving Martha the distinction by which she is known. Over the ensuing four years, Martha became infirm and less likely to flutter or walk. But she was an attraction and crowds gathered around her enclosure. Until the zoo took steps to protect her, visitors would throw sand at her to prompt her to move.

And then on that September day, Martha too joined the rest of her species. She was frozen in a block of ice and sent by train to the Smithsonian Institution where she has been ever since.

If the passenger pigeon can disappear in decades, so can so many other of the planet’s riches.

The loss of the passenger pigeon did not go unnoticed: It helped spawn the country’s first great environmental movement, which led to the federal government’s assumption of jurisdiction over the taking of birds. The first such federal law was introduced on the floor of the United States House of Representatives in 1900 by Iowa Congressman John Fletcher Lacey: “It is late. It is too late as to the wild pigeon. The buffalo is almost a thing of the past, but there still remains much to preserve, and we must act earnestly if we would accomplish good things.” This became known as the Lacey Act, which banned the interstate commerce in illegally obtained birds. A few years later, Congress passed the Migratory Bird Treaty Act, which ratified an agreement with Britain (on behalf of Canada). We no longer slaughter migratory birds as we did in the nineteenth century.

Over the succeeding decades we began to see other pernicious things we were doing to rip asunder the web of life. Rachel Carson’s Silent Spring warned about pesticides. There were other types of pollution, and there was habitat loss. These realizations contributed to the nation’s second great environmental movement of the 1960s and 70s. Out of that effort, the country again enacted laws: the National Environmental Policy Act, the Clean Air Act, the Clean Water Act, the Endangered Species Act. This last was a promise that the United States would not allow species to become extinct, at least not without a major effort to save them.

Despite all that has happened since, Martha’s death haunts us still. There is no better cautionary tale to the proposition that no matter how abundant something is — be it fuel, water, or an organism — we can lose it if we are not good stewards.

There are now over 7 billion of us on the planet, more than there ever were passenger pigeons at their most abundant. We struggle to increase our standards of living, which generally involves greater consumption of the world’s resources — and the consequences of that are altering the world’s climate. Technological innovations allow us to locate and take more and more. Powerful political forces here in the U.S. are trying to weaken or gut the environmental laws. The seas are being denuded of tuna, sharks, and other targeted species. In the American West, aquifers and rivers are shrinking. And this summer, the citizens of Toledo, Ohio were warned not to drink water from Lake Erie, even after boiling, because the lake had been contaminated by unsafe levels of microcystin (from algal blooms related at least in part to agricultural runoff).

The story of Martha teaches us that we need to be vigilant and proceed with caution. If the passenger pigeon can disappear in decades, so can so many other of the planet’s riches, be they biological or not — even if they now seem abundant. And those that are rare can vanish in a heartbeat.