The rapid expansion of palm oil plantations across Malaysia and Indonesia has left a wide swath of destruction through some of the planet’s most extensive and important rainforests. Now, with Brazil announcing plans to dramatically scale-up palm oil production in the Amazon, could the same fate befall Earth’s largest tropical forest?

The stakes are enormous, as the Brazilian Amazon contains an estimated 850,000 square miles suitable for palm oil plantations — an area four times the size of France. By comparison, Indonesia and Malaysia, which account for nearly 90 percent of global palm oil production, have less than 50,000 square miles of oil palm under cultivation.

Done right, oil palm could emerge as a key component in the effort to save the Amazon rainforest.

Yet even as Brazilian and international firms gear up for a major expansion of palm oil cultivation in the Amazon, there is a conspicuous lack of hand wringing by environmentalists. The reason: done right, oil palm could emerge as a key component in the effort to save the Amazon rainforest. Responsible production there could even force changes in Indonesia and Malaysia, both of which have been widely criticized for their poor records on protecting tropical forests.

Palm oil could ultimately benefit the Amazon for a number of reasons. Planted on the degraded pasture land that abounds in the Brazilian Amazon, oil palm could generate more jobs and higher incomes for locals than the dominant form of land use in the region: low intensity cattle ranching. Rather than destroying more rainforest for still-more cattle pasture, local farmers could go into the oil palm business and benefit from its higher returns.

“At current prices, it can provide a Brazilian smallholder a ticket to the middle class,” said Tim Killeen, a senior research fellow and Amazon expert at Conservation International. “Anybody can do the math: 200 kilos of meat per hectare versus 4 tons of oil per hectare. Plantations create jobs, but a smallholder model creates a middle class.”

Replacing cattle pasture with palm oil plantations also offers significant environmental benefits, as palm trees — though not nearly as valuable ecologically as rainforest — at least sequester carbon and evapotranspirate moisture, which is important to the hydrological cycle of rainforests.

Oil palm expansion in Brazil also could put pressure on Indonesia and Malaysia to clean up their acts. Brazil’s stricter environmental laws mean that, should the country begin to produce large amounts of sustainably produced palm oil, it would place Southeast Asian producers at a disadvantage if they hope to sell to European and American corporations, which are increasingly concerned about buying palm oil associated with forest destruction.

Oil palm is among the most productive and profitable tropical crops. A 25-acre plantation can yield palm oil worth more than $7,000 a year for a planter, far in excess of ranching or farming. But its profitability has spurred unbridled expansion in Indonesia and Malaysia, where more than half of oil palm expansion since 1990 has occurred at the expense of tropical forests. Asian production also has fouled rivers and released billions of tons of carbon dioxide into the atmosphere. Producers there have at times run roughshod over traditional forest users, resulting in social conflict. Accordingly, the industry is increasingly battered by criticism from human rights groups and environmentalists.

So why would palm oil in the Amazon be different? 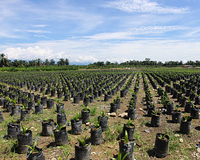 Rhett Butler / Copyright Mongabay.com
In Indonesia, more than half of oil palm expansion since 1990 has occurred at the expense of tropical forests.


Little oil palm is now grown in Brazil — only 350 square miles. In the Brazilian Amazon today, cattle ranching is the big driver of deforestation. Cattle pasture occupies more than 70 percent of deforested land in the Amazon, obliterating forest and resulting in a near-complete loss of stored carbon and a loss of wildlife. The loss of vegetation reduces transpiration, affecting local rainfall. Where large areas of rainforest have been converted for cattle pasture, it becomes drier and more susceptible to drought and fires, which sometimes spread into adjacent forest areas.

Cattle themselves cause problems, compacting the soil, damaging local waterways, and worsening erosion. Meanwhile processing their hides pollutes rivers and streams with toxic chemicals. In short, cattle ranching, as traditionally produced in the Amazon, is often a menace to the environment.

Palm oil is a much different agricultural product. First and foremost, the oil palm is a tree, meaning that it absorbs carbon dioxide and releases water vapor as it grows. The result is that oil palm stores six to seven times the amount of carbon as cattle pasture. Daniel Nepstad, a scientist who co-founded the Amazon Environmental Research Institute (IPAM), said that large-scale expansion of oil palm plantations into pasture “would help mitigate regional climate change, exemplified by the severe droughts of 2010 and 2005, by re-establishing year-round evapotranspiration in an important region of the eastern Amazon.”

Oil palm looks even better from an economic standpoint, generating significantly more employment than ranching, mechanized soy farming, or logging. Agropalma, currently Brazil’s largest palm oil producer, employs one worker per 20 acres of plantation. By comparison, an industrial soy farm typically has one worker per 500 acres, while a cattle ranch often has only one worker for every 1,000 or more acres.

With palm oil prices hovering around $1,000 a metric ton and the Brazilian government planning an aggressive expansion of the crop, a frenzy of activity is taking place. Archer Daniels Midland, mining giant Vale, and the state-run oil company Petrobras Biofuels have announced major Amazon palm oil deals in the past 18 months. Several other major companies are looking to expand production in the region.

But the Brazilian government’s target of having 19,000 square miles (5 million hectares) under palm oil cultivation may be too high — Agropalma thinks it unlikely that Brazil will be able to plant more than ten percent of that by 2020 because of constraints on seed and labor. Seasonal flooding also would limit palm oil plantations in parts of the Amazon.

Brazilian production could reduce the incentive to expand in Malaysia and Indonesia.

Oil palm expansion in the Amazon faces other challenges, yet these constraints may make Brazil’s palm oil industry considerably less damaging than its counterpart in Indonesia and Malaysia. Brazil’s current Forest Code requires landowners in the Amazon to keep 80 percent of their land forested, which means that a company cannot only buy a block of pasture in the Amazon, it must also secure — or pay the cost of — a forest reserve several times the size of the palm plantation. (Brazil’s agricultural lobby is now working to pass a law that would substantially reduce the legal reserve requirement.)

This and other challenges — such as Brazil’s arcane land ownership laws — mean that oil palm in the Brazilian Amazon probably won’t take the scorched Earth approach that has come to represent some palm oil growers in Southeast Asia and the Amazon cattle ranchers. The Brazilian government has also enacted policies to promote more sustainable palm oil production, which limit where oil palm can be grown and prohibit individuals or companies seeking to clear primary forest from receiving low-interest government loans. For all these reasons, Agropalma estimates costs of palm oil production in Brazil to be at least twice those of Indonesia.

All of this suggests that palm oil alone will not be a panacea for the Amazon, but it could help generate income and livelihoods in already deforested areas while stabilizing forest cover and serving as a bulkhead against fire. But Roberto Smeraldi, director of the environmental group Amigos da Terra — Brazilian Amazonia, said that optimism for palm oil will only be justified if the state and federal governments enforce the country’s tougher environmental laws. “There are reasons for concern due to the lack of governance that might make palm oil expansion a risk factor once developed in the region,” he says.

The goal of many Brazilian growers would be to out-compete Indonesian and Malaysian growers on issues of sustainability, which could make Brazilian palm oil more attractive to international food and consumer products companies, such as Unilever. Brazilian producers might even exceed the requirements of the Roundtable on Sustainable Palm Oil (RSPO), whose seal of sustainability — bestowed upon dozen of firms in Indonesia and Malaysia — has been given to some undeserving companies, according to critics.

“We’re not going to be a competitor in markets that don’t care about sustainability,” says Marcello Brito, commercial director of Agropalma. “We believe Brazil will be a good producer, but not a big producer.”

Even if Brazil’s palm oil production misses the government’s ambitious targets, it could pressure producers in Southeast Asia and Africa, where oil palm development is fast-increasing. Should Brazil produce just half of its 2020 target of 5 million hectares, the amount of palm oil produced would represent 10 to15 percent of global production, potentially having a commensurate impact on the price of palm oil and reducing the incentive to expand in places such as Malaysia and Indonesia. More importantly, it would send a signal to other producers that being the lowest-cost producer isn’t necessarily the only path for agricultural development.

“If we start a new plantation using RSPO guidelines and following Brazilian laws, we can be part of the sustainable solution to the Amazon,” says Brito. “But a business as usual approach could destroy the Amazon.”