For several years, a tannery on the outskirts of Shanghai belched dark gases and odors into the air and dumped wastewater into a nearby waterway. The facility, operated by the Fuguo company in Shanghai’s Dachang district, processed leather used in hiking boots for the outdoors retailer Timberland, among other products. This was, needless to say, at odds with Timberland’ s catalogue image of blue skies and clear rivers and hikers frolicking in pristine wilderness, but it was all too common for China.

What wasn’t so common was that in September 2009, the factory operator invited members of the community to a meeting inside the factory, where residents, local media, and Timberland representatives came to share concerns. Fuguo’s CEO listened to impassioned complaints about noxious odors and local residents’ dizzy spells; a community representative was selected to channel future complaints. In April 2010, the facility underwent an inspection by a third-party auditor, with oversight by local environmental groups and community members, to confirm that it had indeed taken the steps it claimed to reduce emissions.

This didn’t happen without prodding. In the months prior to the meeting at the factory, Fuguo’s management had been contacted by an environmental lawyer acting on behalf of a local resident and then by a coalition of 18 Chinese environmental groups, known as the Green Choice Alliance. The activists were armed with records from the local environmental protection bureau documenting instances between 2004 and 2009 in which the factory had been found in violation of China’s own pollution laws. The salient fact is that they had the data. 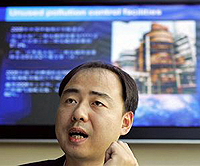 The notion of public access to environmental records in China, which enabled this campaign, is fairly new. By no means is public access complete — or uniformly implemented — across China. In a country where secrecy has long been the norm, vast exceptions restrict the release of any data categorized under the broad, vague category of “state secrets.” Yet it’s significant that the Chinese government has begun to experiment with making certain information available to the public.

“The conventional wisdom is that China is not transparent,” says Alex Wang, a senior attorney with the Natural Resource Defense Council’s Beijing Office. “But over the last few years, China has made meaningful progress on environmental transparency. China right now is behind the world standard overall, yet there really has been encouraging progress.”

In other words, one’s assessment depends on the benchmark for comparison — China is far behind most Western countries (the United States’ Toxic Release Inventory program began in the 1980s), but more transparent, at least in terms of pollution records, than a decade ago.

China’s first environmental agency, modeled in some ways on the U.S. Environmental Protection Agency (EPA), was created in 1993, one year after the Rio Earth Summit. Its early approach to environmental regulation was, not surprisingly, command and control. In 2003, a law requiring that environmental impact assessments be provided to the public before ground was broken on large infrastructure projects, was, as Wang puts it, a “significant milestone” for China, even though only an abridged version of the assessment was required, and not a lot of raw data. Further regulations passed in 2007, which went into effect in May 2008, called for local environmental protection departments to establish offices to make available to the public certain categories of pollution records. Meanwhile, some local environmental bureaus, for example in the northeastern rustbelt city of Shenyang, have been experimenting with offering more records than the national statutes require.

The fact that the government has begun to trickle out certain types of pollution records was noteworthy. But unless they were gathered together and made accessible, it would be hard for anyone to do much with them.

That was the niche that Ma Jun, a former journalist, saw in 2006 when he founded the Institute for Public and Environmental Affairs (IPE), one of the partners in Green Choice Alliance. After traveling around China, reporting on the nation’s environmental problems for the relatively liberal  South China Morning Post throughout the 1990s and then penning the seminal 1999 book, China’s Water Crisis, Ma decided to shift gears from reporting on the problem to trying to fix it.

“I believe in engaging the public. But in order to have meaningful public participation, the public first needs access to reliable information. That is the first step,” the spritely Ma, in his mid-40s, told me in May when I visited him in Beijing. We were sitting inside his sparsely decorated office, its main feature a wooden bookshelf containing such titles as Retreat of the Elephants, an environmental history of China, and Malcolm Gladwell’s Tipping Point.

Behind us, in a second room, was a small cluster of computers, where his young staffers were entering database records, or reviewing documentation of factories’ environmental audits. It was a far cry from the dramatic countercultural sit-ins of America’s 1970s Earth Day activism, with which Ma, a former Yale University fellow, was also familiar. This disciplined, orderly review of documents and inputting data, however, is on the front lines of how China’s environmental advocates are finding relative success. “We cannot fight with slogans or poems,” he told me. “We must fight with data.”

For five years, with the assistance of a carefully cultivated network of young activists across the country, Ma’s team in Beijing has been collecting pollution records that were made available by local environmental protection bureaus, printed in state-run newspapers, or discovered from other sources. His database now includes some 70,000 records of factories violating the law. (Despite the appearance of efficient all-powerful one-party state, the truth is that China’s system of enforcement is fairly decentralized and often inefficient, except on security issues.)

Ma then took that data and put it online — into a series of free public databases, the most prominent known as the China Water Pollution Map. The central government has not shut down Ma’s four-year-old site, in part because, as he points out, he’s currently only arguing for the law to be upheld. “Before we can push for higher pollution standards,” he told me, a thoughtful glint in his eye, “we first want to have the existing regulations observed.”

With the data accessible, the next step was to getting people to use it. In 2008, Ma’s nonprofit joined with the Beijing-based nonprofit Friends of Nature and other like-minded groups to launch the Green Choice Alliance, which has been contacting multinational companies like Timberland to make them aware of their suppliers’ available pollution records. It was a lawyer affiliated with Friends of Nature that first helped the residents near the Shanghai tannery document and articulate their concerns.

A decade ago, large multinational companies that subcontracted to Asian factories to do, literally, their dirty work in assembling tennis shoes, T-shirts and TVs — and now iPhones and digital cameras — could claim that often they didn’t know what happened inside the factories their sub-contractors managed. It wasn’t an excuse entirely without justification. Once- or twice-yearly audits couldn’t catch everything. And after all, China had emissions standards on the books. If the local government didn’t adequately enforce those laws, how was a distant corporate executive to know? Now that excuse is less valid.

Apple Computer is among the companies least responsive to working with Green Choice Alliance.

One company that has begun to use Ma’s database to identify factories that might have problems is Nike. The footwear and apparel company has 134 factories in China (about 330 if you count material suppliers). As May Qiu, Nike’s Guangzhou-based Asia Health, Safety and Environment manager, told me: “In the Nike supply chain, we don’t have our own factories, but we work with factories in our supply chain and want to ensure they meet these [environmental, health, and safety] requirements. We first got to know Mr. Ma Jun and IPE in the middle of 2008. We decide to use his databases to check our factories in the supply chain.” Nike oversees its own audits, but Qiu says the database is helpful for flagging potential violators and focusing resources. She did not say if any factories had lost contracts due to violations, but said Nike did plan “to integrate sustainable goals into sourcing decisions” in the future. “It’s better for us to manage and protect risk in our supply chain at the outset to protect our brand,” she explained.

Other companies that have shown an interest in working with the Green Choice Alliance include Wal-mart and General Electric. The German company Siemens has agreed to build up a tracking mechanism to compare its suppliers with the pollution databases. What those companies will do with information that factories in their supply chain have past violations isn’t yet clear, but taking steps to set up these checks is a positive preliminary step.

Among the companies least responsive to working with the Green Choice Alliance is Apple Computer, Inc. “Apple’s supplier base is the most difficult for us to figure out; they manage that in a highly secretive way — they never talk about who are their suppliers,” says Ma. “I think Apple probably has two faces: In America, it’s a very green friendly company, but in China, when it comes to its secret supply chain management, it’s a totally different thing.”

The long-term battle is about building a system in China that is more transparent and open.

Because Apple treats its supply chain as privileged corporate information, it is difficult to trace factories it uses. Yet anecdotal information indicates problems: In October, a reporter from the Australian Broadcast Company visited the Number Five People’s Hospital in Suzhou and spoke with former workers in a plant that manufactured products for Apple. The workers said they had been made very ill, even unable to walk, after being exposed to a toxic chemical, n-hexane, in a compound used to wipe down touch-screens of iPhones.

A representative from Apple’s corporate communications office said in a voicemail that Apple is committed to responsible supply-chain management and referred me to Apple’s “Supplier Responsibility, 2010 Progress Report.” The document, posted online, sets forth the objective that “companies we do business with must provide safe working conditions, treat workers with dignity and respect, and use environmentally responsible manufacturing processes wherever Apple products are made.”

Ma’s contention is that companies, including Apple, can better ensure that the reality on the factory floor matches their lofty mission statements through more transparent oversight processes. “Apple by itself cannot overcome such great challenges,” he says. “We cannot trust it can do it without participation from other stakeholders.”

Ultimately, the strategy for Ma’s group, Friends of Nature, and allied Chinese environmental organizations is built on a few key insights. First, information is power. To even begin to hold companies or governments accountable, you first have to be armed with good data. Second, the long-term battle is not about kicking out a particular corrupt official or closing down a certain factory, but about building a system that’s more transparent and open. That’s not easy to do anywhere in the world, and especially not in China. But Ma’s team and other green groups are trying.

And it’s not only environmentalists who stand to benefit from more access to data, but as World Resources Institute’s Deborah Seligsohn points out, “There’s a whole community of domestic scholars in China outside of government that could develop new tools and analysis. Without good public data, it’s hard to do peer review. Agencies like the China CDC need data to be able to do environmental health analysis. There are a lot of parties that will use new records as the government makes them available.”

There’s a long way to go. But access to pollution records is one area where China has become more open, not less, in recent years.