In 1990 Kazuhiko Maita set out to capture some bears. Maita, who now directs the Institute for Asian Black Bear Research and Preservation in Hiroshima Prefecture, had first been drawn to the powerful animals as a college student in the 1960s. At that time he had little interest in conservation, and, simply wanting to study their behavior, spent two decades after graduation tracking bears for a regional government office in northern Japan. By the 1980s, however, it was clear that Japanese black bears (Ursus thibetanus japonicus) were in a state of crisis that persists to this day.

“I set out a lot of traps in remote mountain areas, but I only caught two bears — and I’m a very good bear-catcher,” says Maita, who had hoped to attach radio tracking devices to the bears’ necks and then release them. “I was able to capture more around small villages. That’s when I first realized there were almost no bears in the deep mountains of Hiroshima.”

Maita had come face to face with an odd reality of contemporary Japan. Although the country is among the most heavily forested nations in the 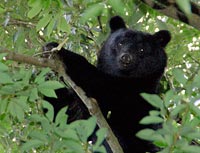 Hideyuki Yoshizawa
A male Japanese black bear hunting for acorns in a Japanese blue oak in the mountains around Owase, Mie Prefecture.

world — despite its urban image, a surprising 67 percent of Japan remains woodlands — much of those forests have become uninhabitable for bears and other wildlife. As the demand for timber in the construction and industrial sectors skyrocketed, the government subsidized large-scale planting of Japanese cedar and Japanese cypress plantations. Today, such plantations make up 41 percent of Japan’s forests, and in some prefectures the figure is higher than 60 percent.

The outcome, say critics like Mariko Moriyama of the 20,000-member Japan Bear and Forest Association (JBFA), has been the creation of forests where few animals can survive. Vast single-species stands of timber lack the plant diversity found in natural forests, and plant diversity forms the foundation for animal diversity. Black bears, for example, are omnivorous but prefer to eat young leaves, insects, berries, and acorns — few of which can be found in timber plantations.

And what natural forest remains has been fragmented by roads and other development, leaving less and less room for Japan’s bears and putting them in conflict with humans — a clash that is rapidly driving down bear populations.

“The results of the experiment are in,” says Moriyama, who founded JBFA after a career as a middle school science teacher. “Japan’s traditional culture preserved amazing forests up until World War II. Our post-war approach has failed.”

Sixty years of development in Japan has reshuffled ancient patterns of land use.

Sixty years of development and urbanization have not only radically changed the composition of Japan’s forests, but have also reshuffled ancient patterns of land use. With wild forests disappearing, habitat for ordinarily shy mountain wildlife has shifted closer to villages, causing interaction with humans to increase. Bears have done serious damage to crops and timber plantations throughout their range on Honshu, Japan’s main island, and Shikoku, the smaller island that sits to the west of Osaka. While cases of injury and death have been rare, black bears are increasingly being shot as “nuisance kills” and by sport hunters, and some isolated populations are nearing extirpation.

Even the supposedly healthy populations may not be safe for long: In 2006, a stunning 4,340 of Japan’s black bears were reportedly killed. No one knows how many black bears live in Japan, but Maita fears the 2006 kills may have represented up to 60 percent of the entire population.

These extraordinary numbers evidence not so much a national hatred for bears as a failure to plan for the inevitable consequences of development on a small and crowded island. Despite high rates of urbanization and a proclivity to manicure nature, the Japanese are as fond of wildlife as any other people, and numerous efforts to protect bears are underway around the country. Nevertheless, Japan lacks a comprehensive strategy for managing the bears, boars, and other creatures that development pushes out of the wild. In this vacuum of knowledge and planning, black bears in Japan lumber ever-closer to extinction.

This crisis in the coexistence of humans and wild animals is a relatively recent phenomenon. For most of the history of civilization in Japan, the 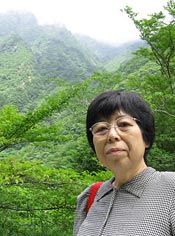 Hideyuki Yoshizawa
Mariko Moriyama, founder of the Japan Bear and Forest Association, in an area of Odaicho, Mie Prefecture, that the association is considering purchasing as a trust.

boundary between bear habitat and human habitat was clearly defined. Bears lived in what was called okuyama, the deep mountains where humans rarely ventured except to hunt and cut wood. While overharvesting of timber was a problem as early as the eighth century, by the 17th century a system of regulations had developed which averted the wholesale destruction of Japan’s forests. The result was that the okuyama was covered almost entirely in natural forest and was regarded with fearful respect as the abode of the gods. Rural populations were concentrated in small farming villages. Between the two was a buffer zone of managed woodland called satoyama, where villagers collected firewood and cut weeds and grass to enrich their rice fields, and large mammals rarely strayed.

Since World War II, rural depopulation has turned the satoyama wild in many places while the okuyama has become increasingly domesticated.

That black bears survived at all into the 21st century is due largely to Japan’s mountainous geography. Although Honshu and Shikoku don’t have large national parks, some inaccessible mountain areas have remained wild. Japan’s black bears have as a result fared better than many of their species in other Asian countries like Bangladesh, where bears cling to survival in small remnants of forest, and China, where demand for bear bile used in traditional Chinese medicine fuels dangerous levels of poaching. The International Union for the Conservation of Nature (IUCN) categorizes bears as vulnerable throughout Asia.

Japan must invent ways to protect wildlife even where wilderness is intertwined with developed areas.

The exact mechanism of the bears’ decline in Japan has varied with location. In Mie Prefecture, on the Kii Peninsula, artificial plantations make up nearly two-thirds of all forests and, as is the case nationwide,depressed lumber prices and rural depopulation have led to widespread neglect of these plantations. Tree seedlings in Japan are planted close together to shade out fast-growing weeds. Later, foresters must repeatedly thin the stands. Insufficient thinning not only produces spindly trees, but leaves the forests dark and bare of undergrowth that could provide leaves, berries, and acorns for bears to eat. Still the bears enter these barren woods in search of sustenance.

“If you go into the remote plantations around May, the forest actually looks bright from where bears have stripped the bark off the trees and the white and red underside is showing,” says Hideyuki Yoshizawa, a 42-year-old forestry worker in Mie Prefecture. He says bears probably strip the bark to get at a sweet underlayer that develops in the spring; where the bark is peeled away, the trunk rots and the timber becomes unusable.

In Hiroshima, says Maita, the depopulation of rural villages has played a greater role.

“Before the 1980s, there was a zone between the villages and the mountains where people cut grass and harvested firewood,” Maita explains. “When people stopped managing those areas, the trees grew larger and bears and wild boars were able to live closer to the villages.” Unharvested orchards of chestnuts and persimmons also drew bears close to houses, where frightened villagers usually shot or trapped them.

Capture-and-release is gaining ground, but in a small country like Japan the bears are often released so close to their native territories that they return home.

Moriyama, Maita, and other conservationists argue that such half-measures don’t get to the root of the problem.

“We need to recreate a place that wild animals can return to,” says Moriyama, who advocates returning all remote mountain areas to natural forest and limiting plantations to 30 percent of lowland areas. JBFA actively cuts down conifer plantations and re-plants them with the broadleaf species that bears favor, and has also preserved 3,128 acres of threatened old growth-like forest in trusts at nine locations. (True old growth forest in Japan is extremely rare).

That may help restore Japan’s natural forests, but the country’s ravenous appetite for timber remains.

“If we replaced our current plantation forests with acorn-bearing broadleaf trees that can barely be used for building houses, we’d have to import an even larger amount of wood from abroad,” says Tohru Hayami, who owns 2,009 acres of Forest Stewardship Council-certified Japanese cedar and cypress forest in Mie Prefecture.

Japan already imports over 80 percent of the 100 million cubic meters of timber it consumes each year, and an estimated 20 percent of that comes from illegally logged forests, mostly in Indonesia, Malaysia, and Russia. Rather than abandon its ailing timber industry, Hayami says Japan should manage its plantations so that wildlife can thrive in them.

“I think it’s possible to preserve biodiversity while producing timber, and as a result provide habitat for many animals, including bears,” he says. Thinning is key to that goal. Hayami leaves about a fifth of the forest canopy open on his land and avoids cutting undergrowth. He’s catalogued over 240 plant species and many animals, including bears. Nevertheless, he admits that providing habitat for bears while running a productive timber operation is far from easy: His remote properties suffer heavy damage from bark-stripping each year. And sustainably-operated forests like his remain rare in Japan.

On the governmental level, Japan is slowly putting more emphasis on biodiversity conservation and has started to give bears more protection. WWF Japan’s Hisashi Okura says that, in response to studies that showed bears were straying outside current preserves on Shikoku, one prefecture is expected to approve new protected areas in the near future.

Unfortunately, much of the damage from development and loss of natural forest has already been done, so creating large, unbroken nature preserves will likely be impossible. Japan must instead invent ways to protect wildlife even where wilderness is closely intertwined with developed areas. To do that, improved research and education are needed, says Yamazaki of the Japan Bear Network.

In short, Japan will once again need to redraw its relationship to the natural world. That won’t be easy in a nation that is now overwhelmingly urban and out of touch with nature, but it may be the only way to ensure a future for Japan’s black bears.