Phan Dinh Duc leans against yellow sacks of freshly harvested rice. It’s a warm spring evening in Vietnam’s Mekong Delta, and Duc, a local farmer, is waiting for traders to arrive by truck to purchase his produce and sell it on commodities markets. Beyond him lies a vast checkerboard of rice paddies, each filled with water and bordered by a network of canals and roughly 10-foot-high earthen dikes. They enable year-round rice cultivation in an area where, a half century ago, vast floodplains typically lay fallow for half the year and farmers planted one annual rice crop that grew in tandem with seasonal floods.

Here in the southern province of An Giang, a stronghold of Vietnam’s booming rice industry, yields have increased fourfold in the last four decades. The initial surge occurred thanks to the development of high-yielding rice varieties and the construction of so-called “August dikes,” which extended the end of the rice-growing season from June to August and enabled farmers to plant a second annual crop. Larger dikes built in the 1990s and early 2000s allowed farmers like Duc to plant a third crop on the same acreage. Within a generation, Vietnam has gone from a poor country where the government rationed rice and other staples, to a lower middle-income one that is now among the world’s top rice producers. 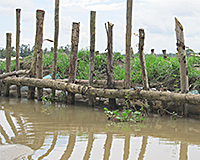 But scientists say that the ongoing construction of dikes and irrigation infrastructure across the Mekong Delta and along the country’s South China Sea coastline has disrupted the river delta’s complex ecological systems. In upstream areas, for example, high dikes block the natural flood pulse and deprive downstream floodplain farms and fisheries of key nutrients. Agricultural chemicals also pollute irrigation canals and cause water and soil to acidify, which scientists say has contributed to a decline in fish populations and a general loss of biodiversity.

Along Vietnam’s southern coast, sluice gates and dikes — built to enable freshwater rice farming and prevent the upstream movement of saline water during the dry season — have restricted the transfer of organic material between freshwater and saline aquatic environments. That has led to mass die-offs of nypa palm, an endemic palm species with a wide range of commercial uses. It also threatens large swaths of coastal mangroves as shoreline dikes interrupt a balanced flow of fresh- and saltwater-based nutrients. Scientists say if the mangroves die, Vietnam would be even more vulnerable to intensifying storms and rising sea levels linked to climate change.

These myriad environmental problems have prompted Vietnamese and international scientists to call on the government to enact measures that will benefit both the economy and the environment in the long term. Their recommendations include abandoning the third rice crop, implementing controlled flooding in the upstream delta to induce sedimentation, moving coastal sea dikes farther inland to allow mangroves to flourish, and creating “dynamic shorelines” that would allow for a better mix of saline and fresh water systems. Vietnam’s ruling Communist Party now faces a difficult choice: continue promoting rice as a flagship export commodity and suffer the environmental and social consequences of degraded soils and ecosystems, or abolish the third rice crop and resist the urge to build even more water-control infrastructure.

Scientists call for creating dynamic shorelines that would allow for a better mix of saline and freshwater systems.

The government is discussing the merits of its longstanding “rice first” policy, which has encouraged steady intensification of rice production, but incentives to maintain the status quo are high. Population growth and a stagnant economy put heavy pressures on provincial officials to boost exports and profits in the short term. And Vietnam’s agricultural sector is dominated by politically connected state-owned companies that want to continue to reap big profits from export earnings.

“It’s an economic analysis: Where do you put the damage?” says Martijn van de Groep, an economist from the Netherlands who manages a Dutch-Vietnamese project, the Mekong Delta Plan, to create a 100-year roadmap for the region’s development. “The underlying question is if Vietnam wants to remain a major rice exporter… or focus on other issues.” 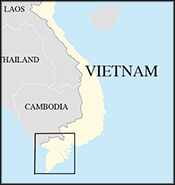 Spanning Cambodia and Vietnam, the Mekong Delta is roughly the size of Switzerland.YALE ENVIRONMENT 360

The Mekong Delta, which spans Cambodia and Vietnam and is roughly the size of Switzerland, is an extremely complex tidal system. The Mekong River begins in the Tibetan plateau and flows hundreds of miles through China and Laos before splitting into nine tributaries that empty into the South China Sea. Every autumn it overflows its banks and deposits sediment in the delta’s nutrient-rich floodplains. During the December-to-April dry season, saline ocean water travels as far as 18 miles upstream.

In the late 1960s, the United States and the International Rice Research Institute helped the government of the former South Vietnam boost rice production by promoting hybrid seeds and building irrigation canals and dikes. The new seeds significantly increased yields, and the dikes allowed farmers to either keep some floodwaters out during rainy periods or pump water in during drier ones.

The campaign to control the delta’s hydrology gained momentum in the 1990s, when the government built a network of higher dikes around farms and constructed sluice gates at the mouths of rivers and canals. Both upstream and downstream gates helped to regulate floodwaters traveling downriver from Cambodia. And throughout the delta, so-called “high dikes” were built above the mean flood level, which further minimized the impact of flooding and saline intrusion on agriculture and allowed for year-round cultivation despite a monsoonal climate.

Today, Vietnam produces more than enough rice to feed its 90 million people, a far cry from the post-war years of the late 1970s, when the Communist government feared famine. (Although the state technically owns all of Vietnam’s land, much of the country’s rice is produced by farmers who cultivate small plots under a 1993 land law that granted them conditional land-use rights.) But environmental costs are rising, says Jake Brunner, Mekong program coordinator at the International Union for Conservation of Nature. A long-term decline in water quality has contributed to the collapse of several native fish populations, he explains. And as less water flows downstream, more saline water flows upstream in the dry season.

Vietnam produces more than enough rice to feed its 90 million people, a far cry from the post-war years.

Building high dikes in such a rich floodplain also prevents the flow of soil nutrients. The farther a rice paddy lies from where water enters a dike, the less organic matter the water contains when it arrives, explains Charles Howie, a Vietnam-based biologist affiliated with Royal Agricultural University in Britain. In addition to damaging soil quality, the lack of nutrients will eventually cause land to sink because it does not receive enough sediment. The rise of triple-cropped rice across An Giang has increased annual yields from 2 or 3 tons per hectare in the 1970s to 22 tons per hectare today. But Howie, a faculty advisor at An Giang University, says it also has required steadily increasing chemical inputs. “Down the road, the soil may not give you what you want,” he adds. 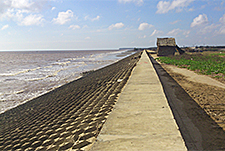 A concrete sea dike in Vietnam’s Tra Vinh province that was completed in 2012. ANDREW WYATT

Along the coast, the construction of dikes has also enabled coastal farmers to switch from rice to shrimp farming, which requires a brackish environment. Now the two farming practices exist in an uneasy equilibrium: Shrimp farming is often conducted inside ring dikes, causing effluent to concentrate rather than flow out to sea. And according to a study led by Le Anh Tuan of Can Tho University and a team of international researchers, as brackish water is increasingly pumped inland, saline water travels upstream through a network of irrigation canals, polluting rice fields and wells and spurring deeper drilling to reach the delta’s groundwater.

With mangroves dying on the delta’s costal edges, the German and Australian governments — working with the Ministry of Agriculture and Rural Development — have committed up to 28 million euros ($36.2 million) for climate-change-adaptation projects. One of the projects will support efforts to build coastal fencing made from trees, with the goal of reducing wave action along eroded coastlines and enabling young mangroves to take root despite stormy seas. But the government recently built a few concrete sea dikes in coastal areas where erosion had destroyed earthen dikes, and building more of them in the coming years will pose a serious threat to mangrove ecosystems, says Andrew Wyatt, a researcher at the Institute of Tropical Biology in Ho Chi Minh City.

In Post-Tsunami Japan, A Push To Rebuild Coast in Concrete

In the wake of the 2011 tsunami, the Japanese government is forgoing an opportunity to sustainably protect its coastline and is instead building towering concrete seawalls and other defenses that environmentalists say will inflict serious damage on coastal ecosystems.READ MORE

The Mekong Delta is still relatively underdeveloped compared with the Mississippi and other river deltas where large-scale infrastructure has led to land subsidence and a range of other environmental problems. But scientists are concerned that the delta could begin to resemble the more developed deltas in the United States and the Netherlands, where planners are only now realizing the pitfalls of building heavily engineered flood control and irrigation systems. And although the environmental effects of triple-crop rice planting are increasingly apparent in the Mekong Delta’s upper reaches, it is unclear whether scientists’ calls for Vietnamese officials to abandon their longstanding “rice first” policy will gain political currency with an authoritarian government plagued by inefficiency and corruption. Observers say the Ministry of Agriculture and Rural Development typically pursues policies that favor economic growth over ecological concerns.

The irony, experts say, is that the Mekong Delta’s rice farmers don’t see substantial economic benefits from the extra crop: Their rice is of low quality, currently selling to traders for as little as 16 cents per kilogram, and any extra income is usually offset by the need to buy more pesticides and fertilizers — even though their efficiency is reduced after a shift from double- to triple-cropping, according to the World Bank.

“You have a ‘rice first’ policy that sacrifices the interest of the poorest for the wealthy,” says Brunner of the IUCN. “From an equity perspective, it makes no sense whatsoever. But this ‘rice at all costs’ approach is deeply ingrained, and there are strong commercial interests.”