The 200-foot summit of Temple IV in the ancient Maya city of Tikal provides a spectacular view of Central America’s largest expanse of intact rainforest. In the late afternoon, spider monkeys dangle from nearby branches, stretching to pick small fruits. The guttural barks of howler monkeys echo through the canopy — a lush green broken only by the occasional flash of lemon yellow from a swooping toucan.

This lowland forest is the heart of the Maya Biosphere Reserve of northern Guatemala, a 2.1 million-hectare (5.2 million-acre) sanctuary that covers 19 percent of the country and contains roughly 60 percent of its protected area. The UNESCO-designated biosphere reserve sustains a wide array of biodiversity, most notably the last remaining population of a key subspecies of scarlet macaw. 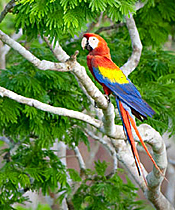 WCS
Conservation groups are helping restore scarlet macaw populations in the Maya Biosphere Reserve.
But this magnificent creature and others that inhabit the reserve — jaguars, pumas, Guatemalan black howler monkeys, Baird’s tapirs — are being pressured not just by the standard threats common to tropical regions, such as illegal logging, fires, and commercial hunting. Even more virulent forces are gnawing away at the Maya Biosphere Reserve, including Mexican drug cartels that cut into the forest to build airstrips to transport drugs, Salvadoran gangs that carve out huge cattle ranches to launder drug money, and Chinese organized crime groups moving their illegal logging network toward the reserve to supply Asian markets with prime tropical hardwoods.

As a result, this natural and cultural treasure — the heart of the Selva Maya, a forest spanning the borders of Guatemala, Mexico, and Belize — has in recent years effectively been cut in two. The western side, which includes two of the reserve’s five national parks and is bordered on the west and the north by Mexico, is under siege, according to Guatemalan park officials. The eastern part of the reserve, where Tikal rises above the jungle canopy and which borders Belize, is lush and intact.

“The story of the Maya Biosphere Reserve has increasingly become a tale of two reserves — one of conservation successes and one of failures,” says Roan McNab, director of the New York-based Wildlife Conservation Society’s (WCS) Guatemala program. McNab is a pivotal figure in a coalition of Guatemalan and foreign conservation groups battling to preserve the eastern half of the reserve and claw back some of the denuded lands of the western sector.

Much is at stake, as the reserve and the surrounding Selva Maya are the largest block of intact forest north of the Amazon Basin. The reserve supports 513 of Guatemala’s bird species (71 percent of the national total), 122 mammal species (64 percent), 95 reptile species (39 percent), and more than 80 species of neotropical migrant birds from North America. It

The reserve and the area that surrounds it comprise the largest block of intact forest north of the Amazon.

enshrouds Tikal, a national park and World Heritage Site, and hundreds of other vestiges of Mayan civilization.

The international coalition struggling to preserve the heart of the reserve has enjoyed some important successes. Scarlet macaws are making a comeback thanks to intensive restoration efforts. The presence of the civilian government and military has grown. Prosecution of environmental crimes is up, albeit slightly. And community-based forest concessions have brought some rural Guatemalans sustainable income and empowered them in managing parts of the reserve.

“There’s a greater social awareness now of the importance of preserving environmental stability,” says Rolman Hernandez, director of the PetÃ©n region of Consejo Nacional de Areas Protegidas (CONAP), the Guatemalan park service. The reserve covers more than half of the PetÃ©n, the largest and northernmost of Guatemala’s 22 departments, or provinces. 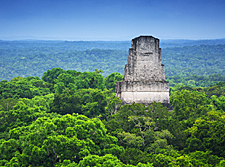 iStockphoto
The World Heritage site at Tikal is among hundreds of historic Mayan sites in the Maya Biosphere Reserve.
The region that became the Maya Biosphere Reserve was once a vast mix of lowland rainforest, wetlands, lagoons, lakes, rivers, and mangrove forests. As many as 2 million people lived here at the peak of Mayan civilization, around 800 A.D., archeologists estimate. Then came the Mayan decline and Spanish conquest.

Until the 1960s, the region consisted of a few isolated forest villages. Then roads, built mainly to access oil and timber, opened the the area to illegal colonization and slash-and-burn agriculture. The reserve was created in 1990 to help control deforestation, but CONAP, financially strapped and often overruled by government officials friendly to the ranchers, has been hampered in its attempts to control the wave of destruction, McNab and others say. Today the human population is 118,000, with most living in poverty.

Criminal activity in the area began to intensify a decade ago, further accelerating the destruction of the western half of the reserve. An important factor is that northern Guatemala is ideally situated to refuel drug aircraft flying from South America and transfer narcotics to trucks for the easy drive to Mexico. The cartels operated in a “climate of impunity” since the army and police lacked the power to take them on, McNab says. The ranchers built dozens of airstrips, including one dubbed the “international airport,” which had three runways and more than a dozen abandoned aircraft. The result was a loss of 40,000 hectares of forest.

Guatemalans have developed a new term for what’s happening in the region: narcoganaderia, a combination of the Spanish words for drugs and cattle ranching. The cartels launder drug money by investing in cattle production and reaping profits from cattle sales in Mexican markets.

CONAP officials say evidence of the work of Chinese-backed criminal groups lies in the yard behind the agency’s PetÃ©n headquarters, in San Benito. The yard is crowded with timber and confiscated vehicles. Victor

The reserve is ideally situated to refuel drug aircraft flying from South America.

Penados, CONAP’s coordinator of control and vigilance for the reserve, points to a pile of rosewood confiscated from suppliers to Chinese criminal groups. The wood comes from one of several recent timber-smuggling busts by the government reported in national news media. This pile, confiscated from a truck delivering the wood to the Caribbean seaport of Puerto San Tomas de Castillo for shipment to China, has a market value of $125,000, Penados estimates.

Operatives with Chinese criminal cartels have been conducting illegal logging just south of the reserve, according to CONAP. McNab fears it won’t be long before the Chinese-backed groups start cutting inside the reserve itself and then turn to intensive jaguar poaching for body parts to serve a Chinese market that is already driving Asian big cats toward extinction.

This conservation drama is playing out under extreme conditions. CONAP and WCS staffers have been threatened many times. Some have been taken hostage, while others have had to “disappear” for several weeks after raids to reclaim illegally acquired ranchland. McNab himself was held at gunpoint by two looters of a Mayan ruin deep in the jungle. I was accompanied into the forest with as many as five armed security guards as we traveled near cartel ranches. Always in the back of my mind were the nation’s poverty, corruption, history of dictatorship, lawlessness, and 36-year civil war, which ended in 1996.

The influence of illegal logging and ranching in the reserve is evident in a series of three CONAP land-use maps showing a wave of fires and land clearing that gobbled up large green swaths of forest from 2000 to 2011, especially in the western section. McNab warns that if law enforcement does not improve, the reserve faces a “chain of falling dominoes threatening to sweep eastward all the way to Guatemala’s border with Belize.”

The 2.1 million-hectare Maya Biosphere Reserve covers 19 percent of Guatemala.
Nowhere is the tale of two reserves more visible than at the Guacamayas Biological Station in Laguna del Tigre National Park. To the south, across the Rio San Pedro and beyond, stretches a vast plain of ranchland, the raw result of deforestation. To the north, the rainforest canopy rolls untattered all the way to the border with Mexico. In 2008, scientists discovered a 1,100-hectare clear-cut smack in the middle of that expanse. It turned out to be a large cattle ranch linked to a Salvadoran gang involved in drug trafficking.

Such forest destruction has in recent decades reduced by 75 percent the habitat of the region’s scarlet macaws, a subspecies of the scarlet macaws found farther south in Latin America and the last remaining macaws in the wild in Guatemala. By 2000, scarlet macaws had nearly been extirpated in the reserve. A 2003 WCS study estimated that the population, mostly centered in the forest to the east of Laguna del Tigre park, had dropped to 200 birds. That year, the researchers monitored 15 nests, but only one chick successfully fledged.

But a program of predator control, environmental education in local schools, and hand-rearing by veterinarians brought the number of successful macaw fledglings to 29 in 2011 and 49 for this year’s nesting season. Says McNab, “We feel pretty good about adding that number of birds to the population. That’s big in terms of saving the species.”

To halt continuing deforestation, CONAP and its allies have established what they call “the Shield” — a lattice of trails running along the eastern border of Laguna del Tigre park, anchored by three major bases for patrols by CONAP, the army, national police, and others. Patrols and arrests have risen steadily over the past four years.

If the success or failure of the Shield will determine whether the western front of the reserve holds, what happens in villages like UaxactÃºn will decide whether the eastern part will avoid destruction from within.

UaxactÃºn, population 280, is one of 14 villages awarded government concessions more than a decade ago as part of an experiment in community-based forest management. The concessions, covering nearly one-fourth of the reserve, require residents to protect the forest ecosystem

Villagers now work in sustainably harvesting timber and non-timber products from the forest.

and manage its wood and other resources sustainably.

The villagers must refrain from poaching, intensive logging, slash-and-burn farming, and other unsustainable practices, as well as patrol for and report any such illegal activity. In return, CONAP, WCS, and other groups provide technical and financial support for forest-product ventures. Dozens of residents now work in sustainable harvesting of timber, date palm fronds, chicle for chewing gum, and other non-timber products from the forest. Others work in the village sawmill and woodworking shop.

Village leaders say the concession is working well. But not all the concessions have been so successful, according to a study published in March in the journal Forest Ecology and Management. Among reasons for the problems were limited funding, the low CONAP budget, pressure from illegal ranching, and land speculation.

The effort in the village of Cruce a la Colorada was one of the failures. In 2010, disputes between ranchers and concession managers became so heated that concession members received death threats. A community leader was assassinated. In the ensuing climate of fear, the project collapsed.

But the conservation groups remain hopeful.

“You can grapple with these governance issues and you can have success,” McNab says. “It takes an integrated strategy working with a huge suite of partners, but it can be done.”