On a muggy morning near Vinh Cuu, a town about 60 miles north of Ho Chi Minh City in southern Vietnam, a blue Toyota pickup whizzed by dense tropical scrub. The nearest city was Bien Hoa, home of an American air base during the Vietnam War. Today, the surrounding countryside is a patchwork of villages, farms, and recovering forests.

Inside the truck, workers from the Vinh Cuu Nature Reserve were trading war stories, recalling that the region was once a hotbed of fighting. The surrounding forest had served as a haven for the Viet Cong; 10 miles away the Communist guerillas had dug a network of tunnels.

The road turned to clay and snaked into a dense bamboo canopy. When the forest gave way to fields, the truck stopped on a stretch of road that straddled two tree plantations — one of imported Australian acacia, and the other of a native hardwood, Hopea odorata, also known as thingan or takian.

Thirty-five years after North Vietnamese tanks entered Ho Chi Minh City — formerly Saigon — and four decades after U.S. forces destroyed ordamaged large swaths of Vietnamese forest with bombs and defoliants, this landscape is a window into Vietnam’s struggle to regenerate its once-abundant forests. With much of the country’s woodlands and jungle lost or damaged over the past half-century by war, the spread of agriculture, and logging, Vietnam’s forestry experts are split over what the nation’s new forests should look like.

On the one side are those who would replace the lost forests with acacia and eucalyptus plantations — alien, monocultural forms of regeneration that supply abundant wood products but support little biodiversity. On the other side are scientists and conservationists who would like to regenerate forests of Hopea odorata and other native species, which are slow-growing but support a far wider variety of indigenous plants, animals, birds, and insects.

“The American army used planes to kill our forests,” said Tran Van Mui, director of the Vinh Cuu Nature Reserve, which since 2009 has promoted a $1.5 million program of native tree reintroduction among villagers. “Now I’d like to return to natural forests. The hopea is a big tree with a long life.”

By some estimates, forest cover in Vietnam declined by 50 percent between 1945 and 1980. During the Vietnam War, U.S. forces sprayed 72 million liters of herbicides, including Agent Orange, on the Vietnamese countryside and dropped roughly 13 million tons of bombs, according to Jakarta-based forestry expert Chris Lang. An Australia-based forestry expert, Tran Lam Dong, reports that defoliants destroyed about 7,700 square miles of forests — six percent of Vietnam’s total land area.

Southeast Asia’s native forests are ‘among the fastest disappearing in the world,’ says one expert.

But in recent decades, logging and the conversion of woodlands to agricultural fields has done more damage to Vietnam’s forests than wartime defoliation and bombing. From 1980 to 1990, forest cover in Vietnam declined from 32 percent to 27 percent of the country. The International Union for Conservation of Nature said in 1998 that a “long period of selective logging” had reduced Vietnam’s Hopea odorata stock to “small groups of trees or isolated individuals.” The Viet Nam News reported this month that illegal logging was so rampant in 2010 that four forest rangers had been killed and 44 injured trying to stop it.

Hopea odorata is a species in the Dipterocarp genus, a family of large tropical hardwoods native to the lowland forests of Southeast Asia. The tree — “Sao Den,” or “black star,” in Vietnamese — was popular in traditional Vietnamese economies because it resists termites. Hopea logs were made into canoe-like boats that once ferried rice and coal around southern Vietnam’s Mekong Delta.

These native stands of trees have been badly decimated not only in Vietnam but across all of Southeast Asia. Although the Dipterocarp forests of Southeast Asia support a “substantial proportion of the world’s biodiversity,” they are “among the fastest disappearing in the world,” according to Switzerland-based researcher Chris Kettle.

Vietnam’s forest recovery efforts have been driven in part by Phung Tuu Boi, a forester who experimented with various regeneration projects after the war. He worked with Australian colleagues to plant Australian acacia and eucalyptus trees in deforested areas of central and southern Vietnam. Unlike hopea — which can’t easily re-colonize degraded landscapes because they are insect-pollinated and have poor seed-dispersal capabilities — acacia and eucalyptus seedlings grew easily in soils degraded by logging and herbicides. 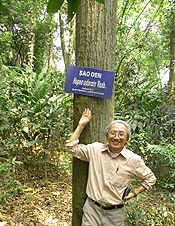 Photo by Mike Ives
Phung Tuu Boi stands in front of a hopea tree at the Forest Inventory and Planning Institute in Hanoi.

A landmark 1998 decree set a goal of restoring Vietnam’s forest cover to 1940s levels by 2010 through planting 5 million hectares (19,300 square miles) of trees — 2 million for reserves and 3 million for wood production.

Boi and others have long realized that importing Australian exotics was just a partial solution. Although the trees were good for business — by 2008, 850,000 hectares of domestic acacia and eucalyptus trees were supporting Vietnam’s $185 million-per-year wood-chip export industry — it became clear that acacia and eucalyptus monocultures didn’t protect watersheds or conserve biodiversity as native trees did.

Unlike native Dipterocarps, acacias block indigenous trees, shrubs, and lianas (woody vines) from growing underneath them, which eliminates the habitat of native insects, vertebrates and fungi; reduce biodiversity; and lead to species extinction. In Brunei, a study has shown that acacias convert disturbed forests into “nearly mono-specific stands.”

Boi, now 70 and semi-retired from Vietnam’s Forest Inventory and Planning Institute, hopes that as trees like Hopea odorata are planted across central and southern Vietnam in coming decades, stands of Australian trees will gradually yield to healthy native forests. But at the moment, he said, “biodiversity isn’t good there — there are no birds or wildlife.”

Reintroducing native Dipterocarps in Vietnam — under a communist, one-party government — isn’t as transparent or straightforward a project as it might be in a developed country. Notably, the Vietnamese government scientists interviewed for this article suggest that Hopea and other native species should not only promote biodiversity, but supply Vietnam’s domestic timber market and $2.8 billion-per-year furniture export industry.

“We have to have a compromise between production and conservation forests,” said Ha Huy Thinh, director of the Research Center for Forestry Improvement at the Forest Science Institute of Vietnam. “Hopea has existed in Vietnam for thousands of years, and it grows in friendship with other species. But in the long term it must provide material for industry.”

There are other complications. Even if native Dipterocarps are valuable in the long term — Hopea odorata logs are worth at least three to four times more than acacia logs — they take at least 30 years to mature, as opposed to five years for acacia. Hopea seedlings require two years in the nursery — about 20 months more than acacia seedlings — and are 5 to 10 times more expensive.

In Vietnam, where 25 million people depend on forest products for subsistence, that higher price makes a difference: Many Vietnamese villagers prefer to plant acacia, which they sell to domestic paper mills.

Vietnam began offering subsidies for native-tree reintroduction in 1998, but they have proven insufficient for poor villagers, said Tran Lam Dong, a Ph.D. student at the University of Tasmania in Australia. Financial support aside, many Vietnamese agricultural extension workers lack proper training on how to reintroduce native trees, said Christopher Beadle of Australia’s national science agency, CSIRO. In the case of Hopea odorata, he said, unless the tree is planted with acacia at a special density ratio — 600 hopea trees and 1,000 acacia trees per hectare — shade from the acacias stunts the hopeas.

Despite these challenges, Vietnamese growers are planting Hopea odorata and other native Dipterocarps on small scales. For example, on government land in Dong Nai Province, foresters from the Vinh Cuu Nature Reserve are intercropping Hopea odorata with coffee bushes. (Vietnam is the world’s second-largest coffee exporter behind Brazil.)

“The idea is to have other things in the system so the grower has an opportunity to maintain an income in the five-to-thirty year period,” Beadle said. “That’s what you have to do to meet the needs of the rural poor.”

The native forests of Vinh Cuu were exploited until a 1997 logging ban halted the destruction, said Tran Van Mui of the Vinh Cuu Nature Reserve. He said that the reserve’s effort to spur villages to replant native tree species has faced some resistance.

“Sometimes local people say no,” Mui recalled on a recent morning in his office. “They know that if they plant hopea in 2010, they can’t harvest until 2050. And most of them are poor, so planting acacia is easier.”

Mui sat under a portrait of former Vietnamese President Ho Chi Minh. After glancing at topographical maps on his wall, he stood, pushed open his office door, and walked through a courtyard toward the Vinh Cuu reserve’s front gate. The only sound in the dusty parking lot was of birds chirping. A 40-foot Hopea odorata tree was standing tall in fierce sunshine.