Standing on a hilltop in Kerta Buena, an Indonesian village on the island of Borneo, local farmers look out over a blackened moonscape. In the 1980s the land was forested, but now it is pockmarked with craters where miners have clawed coal from the earth. On a recent November afternoon, trucks crisscrossed the site on their way to and from riverside coal barges in the nearby provincial capital of Samarinda. The sound of their engines reverberated across the barren landscape. 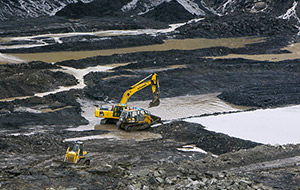 Excavators work in an open pit coal mine at the PT Exploitasi Energi site in South Kalimantan, Indonesia. DADANG TRI/BLOOMBERG VIA GETTY IMAGES

Kerta Buena lies in northeastern Borneo, an island larger than France that is primarily split between Indonesia and Malaysia. ITM, the Indonesian company that owns the mine, says it produces 29 million tons of coal per year on sites across Indonesian Borneo that cover nearly 200,000 acres — half of them on land the government designates as “production” forest. Although an ITM spokesman said the company’s mining sites have five-year reclamation plans in accordance with Indonesian law, some Kerta Buena farmers complain that wastewater from coal mining activities is leaking into rice paddies and damaging their harvests. Acid mine drainage across Borneo has killed fish in aquaculture operations, and farming communities — often located next to coal mines — must contend with coal dust that routinely coats crops and seeps into their homes.

“I don’t have a voice to express my concerns,” said one farmer, Made Sari. The reduced harvest costs her hundreds of dollars per year, she said, and pollution from coal mining may force her to return to her ancestral village in the Indonesian island of Bali.

In recent decades, Indonesia’s forestry sector has gained international notoriety for clearing tropical rainforests for timber and vast oil palm plantations. Yet the country’s coal production — which has increased five-fold in recent years, from roughly 90 million tons in 2000 to 458 million tons in 2014 — is also taking a heavy, if less obvious, toll on landscapes, watersheds, and human health. That damage is increasingly evident in Indonesian Borneo, known as Kalimantan, which contains nearly 60 percent of Indonesia’s coal reserves.

‘The players in the logging industry are just changing what they’re exploiting … to coal mines,’ says one expert.

The extent of that damage is difficult to document because Indonesia’s coal sector is notoriously corrupt and opaque. JATAM, an Indonesian advocacy group, reports that about 16 million acres of land were set aside for coal mining in East and South Kalimantan provinces in 2010 — an area twice the size of Belgium. In South Kalimantan province, about 14 percent of all forested area lies in coal concessions, according to a 2014 Greenpeace analysis of government data and mining feasibility studies.

Indonesia has a long history of heedless natural-resource extraction that reached soaring heights during the 31-year reign of former President Suharto, says Siti Maimunah of the Sajogyo Institute, an Indonesian research organization. The country transitioned to democracy after Suharto’s rule ended in 1998, but Maimunah says the cozy relationships between the government and extractive industries still exists. “The players in the logging industry are just changing what they’re exploiting,” said Maimunah. “They changed to coal mines.”

After more than a decade of explosive growth in Indonesia’s coal-mining sector, the country is now the world’s fourth-largest coal producer, the largest exporter of thermal coal for power stations, and a key fuel source for coal-fired power plants in China, India, and other countries. Indonesian coal accounts for 7.2 percent of the world’s output, and thus plays a significant role in warming the planet with heat-trapping emissions from coal-fired power plants.

Coal demand from China — Indonesia’s most important customer — is falling as the Chinese economy slumps. Yet Indonesian President Joko Widodo has vowed to make up for a recent dip in coal exports by adding 35,000 megawatts of domestic power capacity by 2019 to help meet the rising energy needs of his country’s 253 million people. About 20,000 of those megawatts would come from coal, and the mines of Borneo would supply much of it.

Indonesia’s coal sector has boomed on the heels of an administrative decentralization process that followed the country’s 1998 transition from authoritarian rule to democracy. As local districts assumed more power in the early 2000s, the number of nationwide permits for mining activities soared — from 650 in 1999 to more than 8,000 in 2010, according to a report by the Indonesia-based Center for International Forestry Research (CIFOR).

Decentralization has enabled district-level politicians to more easily trade coal and other mineral concessions for cash or political favors, often without the central government’s blessing, environmental advocates say. And some companies have been mining coal in “conservation forests” — wild lands specifically earmarked by the central government to protect ecosystems and biodiversity. For example, mining concessions cover an area of nearly 3,000 acres in East Kalimantan’s Bukit Soeharto State Forest, CIFOR reported in 2012.

When coal miners arrive in an Indonesian forest, they typically remove the tree cover and strip the land bare, according to Tessa Toumbourou, an environmental governance specialist who studied Kalimantan’s mining sector as a consultant for the Asia Foundation, a Washington-based non-profit. Companies often fail to remove contaminated mining wastes or restore removed soil that they stockpile during the mining process, and re-vegetation is often done with the wrong species, Toumbourou says.

Those abuses are affecting local watersheds, with acid mine drainage releasing toxics into waterways, according to experts and several studies. In South Kalimantan province, a 2014 Greenpeace study of surface and wastewater samples collected in coal-mining areas reported levels of iron and manganese in creeks and rivers that were consistently above Indonesia’s legal limit, and noted that 7 of 29 samples had pH readings below 3 — a level of acidity found in vinegar. A February study in the journal Environmental Contamination and Toxicology found that soils in a coal-mining district of South Kalimantan were contaminated with polycyclic aromatic hydrocarbons, a group of chemicals associated with coal mine pollution and that have caused tumors and reproductive problems in laboratory animals, according to the U.S. Environmental Protection Agency.

In Samarinda, farmers and residents say that open-pit coal mining has drained water tables — essential for rice farming — because of the large amounts of water used in the mining process, Mining also has increased flooding because it denudes topsoil on hills, leading to rapid runoff of torrential rains into waterways. The conservation group WWF reported in 2012 that flooding had become commonplace in Samarinda since its mining boom began in the early 2000s, and had likely caused dramatic sedimentation in three lakes in the Mahakam River Basin, a floodplain that is home to 147 indigenous species of freshwater fish. Reporting by East Kalimantan’s environmental agency has attributed declining water quality and a large-scale die off of downstream fauna to water transport and wastewater discharges into the river — two activities that are dominated by the local coal industry.

The country’s coal exports account for nearly 900 million tons of carbon dioxide per year, roughly the equivalent of Germany’s annual carbon dioxide emissions, according an analysis of extractive-industry data by Lauri Myllyvirta, a Greenpeace campaigner in Beijing. For the moment, only about 200 million additional tons of coal are burned domestically, Myllyvirta says. But as Indonesian companies build more coal-fired power plants, they may undermine the Indonesian government’s recent pledge to the U.N. to reduce national greenhouse gas emissions by at least 29 percent by 2030.

Health risks for ordinary Indonesians will inevitably increase as more coal-fired power plants are built. Researchers from Greenpeace and Harvard University estimated this year that Indonesia’s coal plants are already causing 6,500 premature deaths per year, and that the annual death toll would climb to 28,300 if the government follows through on a plan to build more than 100 new coal-fired power plants.

There is significant room for growth in Indonesia’s renewable energy sector, which currently accounts for just 5 percent of its energy production, says Eve Warburton, a doctoral candidate at the Australian National University who studies Indonesia’s energy policies. But coal is very attractive to Indonesian companies because it is readily available and easily transportable, she adds. Indonesia may also become a net importer of natural gas by 2020, leaving the government vulnerable to swings in global gas prices — and hungry for a stable fuel supply in its backyard.

The impacts of Indonesia’s coal-mining sector could be eased if companies did better reclamation work.

Indonesian coal mining companies are “confident that the industry will have a long life span,” Warburton said. “I think they’re right — that’s the frustrating thing.”

The on-the-ground impacts of Indonesia’s coal-mining sector could be eased if companies did better reclamation work. But even though Indonesian law requires companies to earmark money for reclamation activities before the extraction process begins, they often evade these obligations. In a typical case, explains Luthfi Fatah, a resource economist at Indonesia’s Lambung Mangkurat University, a mining company will lease a 1,000-acre concession from the government and leave a 24-acre parcel intact. “When the government asks them to do reclamation, they say, ‘We haven’t finished yet — we still have 10 hectares [24 acres] to be exploited,’” Fatah said.

In Samarinda, 76 mining permits cover 70 percent of the city’s land area. Merah Johansyah of JATAM says farmers on the city’s rural fringes often have little choice about whether to sell their land to mining companies because mining activity near farmland often disrupts the water table and affects irrigation. The government’s environmental regulations are so weakly enforced, he says, that coal companies effectively have a license to pollute with impunity.

Thousands of abandoned gold mines are scattered across South Africa, polluting the water with toxics and filling the air with noxious dust. For the millions of people who live around these derelict sites, the health impacts can be severe. READ MORE

One symbol of that impunity is the abandoned mining pits that pockmark many Samarinda neighborhoods. In May, a 13-year-old boy with special needs drowned in a Samarinda pit with no protective fencing. According to JATAM, the pit belonged to an Indonesian company that sells coal to St. Louis-based Peabody Energy, the world’s largest private-sector coal company. A Peabody spokesperson did not respond to an interview request or a list of written questions about its work in Indonesia.

Another child drowned in November, one of 12 who have drowned in coal-mining pits since 2011. “The kids were playing here, and they didn’t understand that it’s very dangerous,” Fatamsyah, a teacher at the girl’s elementary school in Lok Bahu district, told me the morning after the girl’s death. “The government should quickly close this pit, but it’s just thinking about money from extraction, never about the social and environmental impacts.” The pit is much larger than a swimming pool and had steep, jagged edges. Its light-blue water looked clean, but JATAM had tested it and discovered a pH level of 4.3 — well below the Indonesian legal standard of 6, and low enough, according to U.S. EPA standards, to inhibit fish reproduction. A danger sign stood next to the pit, but Fatamsyah said it had been placed there after the accident. A representative from a local environmental protection agency did not respond to questions submitted by email.

“Coal is being extracted from the suffering of the East Kalimantan people,” said Johansyah of JATAM. “And coal is not only polluting the climate — it’s killing children.”