During four of the last 10 summers, more than half of the 800-mile Tarim River in northwestern China ran dry. Landscape ecologist Niels Thevs has been there conducting fieldwork and has watched water shortages take the heaviest toll on downstream cotton farmers, who irrigate six or seven times during the growing cycle. “One could really feel the struggle for water,” Thevs recalls. “People did everything they could.” But their typical strategy — drilling wells — only further depleted the basin’s groundwater reserves.

With its population growing and agricultural activity intensifying, the Tarim River basin, the largest arid inland basin in China, is facing threats to water security that also are confronting the nearby nations of Central Asia. But on the horizon is another challenge that will only exacerbate the region’s growing water woes: melting glaciers. The Tarim basin receives about 40 percent of its water from glacial runoff, and although glacial melting may initially provide the basin with more water, scientists say the inevitable shrinking of many glaciers will likely reduce total available water. That could leave downstream farmers and communities high and dry. 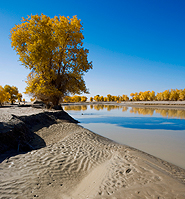 TAO Images Limited
The Tarim River running through China’s Xinjiang Province.
Â
To overcome these growing water problems, German scientists and agricultural experts, working with their Chinese counterparts, are devising ways to ensure that the Tarim — the most heavily glaciated river basin in China’s arid northwest — will have enough water now and into the future. Last year, Thevs and researchers from 11 other German universities began receiving funds through a new project called SuMaRiO, short for “Sustainable Management of River Oases Along the Tarim River.” Over five years, using 7.7 million Euros ($9.3 million) from Germany’s Federal Ministry of Education and Research, they will work with farmers, communities, and officials in the basin to plan for a day when groundwater reserves are further depleted and runoff from glaciers may be considerably reduced. The SuMaRiO scientists and Chinese authorities are studying a host of options, from using irrigation water far more efficiently to constructing dams that could retain glacial runoff.

In the process, the SuMaRiO team is getting a glimpse of a problem that will affect some other glaciated river basins worldwide: Watersheds often cross international boundaries, meaning that as glacial melting intensifies and populations grow, the potential for disputes — and the need for international cooperation — will increase.

According to Jeffrey S. Kargel, a glaciologist at the University of Arizona, the German-Chinese project could be a useful example for people in areas that will be affected by glacial melting later in the century, such as the largely arid “Stans” — the former Soviet republics of Central Asia, four of which border northwest China — and Peru’s Cordillera Blanca. It doesn’t mean people in these regions “will no longer have a glass of water to drink, but it does mean

As glacial melting intensifies, the potential for disputes and the need for international cooperation will increase.

they will need to considerably adapt how they make a living and their expectations of livelihoods,” says Kargel, who is not affiliated with SuMaRiO.

The impact of glacial melt on global water supplies will vary greatly. In some regions, the vast majority of water feeding high-mountain rivers comes from rain and snowmelt, not melting glaciers. In other regions, such as the Himalayas, about half of the glaciers are situated above 5,500 meters (18,000 feet) and will not be subject to melting anytime soon. But regions such as the Tarim basin, as well as the Peruvian and Bolivian Andes, are significantly dependent on glacial runoff, presenting a serious challenge as the world warms and populations grow.

In a recent issue of the Journal of Glaciology, for example, an international team of researchers reports that glacial runoff feeding Peru’s Rio Santa has peaked and appears to be in decline as Peru’s Andean glaciers shrink about one percent a year. Glacial melting could eventually cause summer discharges along the Rio Santa to fall by up to 30 percent, according to the researchers.

The Tarim basin receives meltwater from roughly 14,000 glaciers occupying an area the size of Vermont and surrounded by several mountain ranges — the Tian Shan, the Kunlun, the Karakorum, and the eastern Pamir — in China, Tajikistan, Kyrgyzstan, and Pakistan. Soaring in an airplane above this region, I saw glaciers stretching to the horizon. Sunlight leapt off their icy surfaces and shone through my passenger window, shimmering off silverware. They looked so vast and commanding that it was hard to imagine them disappearing.

But over the past 40 years, glaciers feeding the Tarim basin have lost about 8 percent of their volume and 7 percent of their surface area — a slower rate of decline than glaciers in many parts of the Andes or the Alps. Glacial runoff has increased by 13 percent in the Tarim River since the 1990s as a

Flows along the river have been decreasing in recent decades, largely because of a sharp increase in irrigation.

result of what the Journal of Glaciology and Geocryology calls “climatic warming and wetting.”

But despite the increase in runoff, flows along the river have been decreasing in recent decades, largely because of a sharp increase in irrigation. That worries Chinese and German scientists because the basin, which suffers from soil salinization and desertification, receives an average of only 3 inches of precipitation per year. The Tarim also sits in northwestern China’s Xinjiang Uyghur Autonomous Region, which accounts for more than a third of the country’s total cotton production.

SuMaRiO researchers, working with China’s National Climate Center and local scientific institutes, plan to conduct comprehensive mapping of the region’s watersheds and give long-term recommendations to Xinjiang Province’s Tarim River Basin Water Management Bureau. They are chiefly interested in reforming wasteful irrigation practices, but will also investigate strategies that could help people in the basin adapt to an altered hydrological landscape. One idea is expanding coverage of less water intensive native crops like “common reed” (Phragmites australis) and two plants known locally as “kendir” (Apocynum venetum and Apocynum hendersonii). Common reed can be used to make paper and construction materials, and kendir leaves and stems can be processed into textiles or medicinal teas.

Other ideas are more technologically intensive. SuMaRiO experts plan, for example, to develop sensor-controlled irrigation systems that could be manufactured by Chinese companies, and they are talking with Chinese officials interested in building reservoirs high in the Tian Shan Mountains on the headwaters of the Aksu River, a tributary of the Tarim. Starting in 2002, Xinjiang authorities built dykes, channels, and sluice gates in the basin in an attempt to funnel water to the Tarim’s downstream reaches. Trapping water in alpine reservoirs would attempt to mimic glaciers, which store water as ice in winter and release it as snowmelt in summer, when water demand is highest. 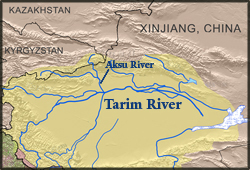 Digital Chart of the World/Yale e360
The Tarim River basin
Â
But building dams to compensate for disappearing glaciers won’t replace natural watershed functions. Alan Gillespie, a geologist at the University of Washington in Seattle, says lakes that serve hydropower dams in arid regions tend to lose a lot of water through evaporation. Gillespie says the Tarim River basin might benefit from “check dams” — small, temporary dams constructed across swales or channels for the purpose of regulating stream flow. But he cautions that they probably wouldn’t do much to offset droughts or runaway water use.

Technical issues aside, the benefits of a dam or reservoir must be weighed against the environmental impacts, since flooding inundates mountain ecosystems, explains SuMaRiO civil engineer Markus Disse.

A key question is how conflicts over glacier-fed watersheds will contribute to regional and international tensions. In the Tarim basin, Xinjiang authorities have adopted a quota system for water allocation, but according to ecologist Thevs, of Greifswald University, they remain powerless to enforce it, in part because the Chinese military oversees a sizeable percentage of cotton growing and wields considerable political influence. These days, adds Zhang Jiebin, director of the Water Law and Policy Program at Xinjiang Institute of Ecology and Geography, conflicts are simmering between the basin’s upstream and downstream water users.

Rivers — and water-driven conflicts — also cross boundaries. Disse says officials in Kyrgyzstan, home to many glaciers feeding the Tarim basin, are “very, very sensitive” about hydrological data and have refused to provide information on stream flow along the Aksu River, a principal Tarim River tributary. That leaves SuMaRiO scientists creating climate change models for the Tarim basin based to some extent on educated guesswork.

In its quest to find new sources of energy, China is increasingly looking to its western provinces. But, as Christina Larson writes, the nation’s push to develop fossil fuel and alternative sources has so far ignored a basic fact — western China simply lacks the water resources needed to support major new energy development.READ MORE
Thevs says two glacier-fed river basins in Central Asia, the Syr Darya and the Amu Darya, are potential drivers of future resource conflicts, partly because their drainage basins stretch across several former Soviet republics. He predicts that as impoverished nations like Afghanistan and Tajikistan begin to demand more water to support growing economies, their demands will spark new transboundary resource tensions.

Scientists say to avoid future water conflicts, countries with glaciers should sign international treaties that clearly spell out what will happen after glaciers melt and document how the melting process — and the construction of alpine reservoirs — may affect transboundary stream flows. Multilateral cooperation on water rights is already stalled across Asia, Kargel notes, in part because some governments are reluctant to share hydrological data. “If countries are hell bent on ‘my way or the highway’ and hold hydrological data as state secrets,” he says, “we can’t make progress.”