Ecologists who want to save the world’s biodiversity could learn a lot from Kevin Bacon.

One evening in 1994, three college students in Pennsylvania were watching Bacon in the eminently forgettable basketball movie The Air Up There. They started thinking about all the movies Bacon had starred in, and all the actors he had worked with, and all the actors those actors had worked with. The students came up with a game they called Six Degrees of Kevin Bacon, counting the steps from Bacon to any actor in Hollywood. In general, it takes remarkably few steps to reach him. Even Charlie Chaplin, who made most of his movies decades before Bacon was born, was only three steps away. (Chaplin starred with Barry Norton in Monsieur Verdoux, Norton starred with Robert Wagner in What Price Glory, and Wagner and Bacon worked together in Wild Things.)

Six Degrees of Kevin Bacon became a 1990s sensation, complete with talk show appearances and a book deal. University of Virginia computer scientists got on the bandwagon as well, building a web site called The Oracle of Bacon. You can use it to analyze the connections between all 1.6 million actors listed in the Internet Movie Database. It reveals that all actors in Hollywood are connected to Bacon on average by just 2.95 steps.

But it turns out that Bacon is not so remarkable. Over 1,000 actors are linked to the rest of Hollywood by less then three links. And even the most obscure actors can be linked to everyone else in Hollywood by less than ten steps. Six Degrees of Kevin Bacon says less about Bacon, in other words, than it does about the organization of the Hollywood network. If you were to simply join 1.6 million actors to each other at random, it would take many more links to connect any two of them than in real life.

Scientists hope to use network theory to help them prevent the collapse of ecosystems.

Mathematicians call this intimate linkage a “small-world network.” And physicist Albert-Laso Barabasi of the University of Notre Dame and his colleagues have discovered that Hollywood actors are not unique informing a small-world network. The World Wide Web is organized in the same way. So is the anatomy of the human brain. What’s more, all these networks get their small-world organization because they follow similar rules. In each network, most nodes are linked to only a few other nodes. But a small fraction of nodes have lots of links. These hubs shorten the paths between all the nodes in the entire network.

Over the past two decades, Barabasi and other researchers have developed a sophisticated theory of networks that helps make sense of what look at first like hopelessly intricate tangles. Network theory is allowing scientists to understand how networks produce unexpected kinds of behavior you wouldn’t be able to predict from looking at individual parts, from the remarkable robustness of the Internet to the sudden crash of financial markets.

In the past few years, ecologists have begun to apply network theory to nature. By mapping the connections between species, they are discovering some of the rules by which all ecological networks are organized, and how these rules help foster biodiversity. They’re also studying how biological invasions, overfishing, and other threats are reorganizing these networks, and possibly putting them at risk of collapse. By discovering early warning signs of networks in trouble, scientists hope to be able to predict these collapses and prevent them from occurring.

Species are joined in an ecological network if they have some kind of relationship. One species may be a predator, and the other its prey. One species may be a tree, and the other a bird that spreads its seeds in its droppings. Ecologists have been well aware of the fact that nature is arranged in networks made up of links between species. Food webs are a common sight in grade-school textbooks, after all. But when the first food webs appeared in the scientific literature in the early 1900s, they were not supposed to be complete roadmaps of ecological networks. Instead, they were cartoons that illustrated some of the new concepts emerging at the time.

If plant species depend on just one pollinator, they are vulnerable to extinction if they lose their partner.

One of the most important of those concepts was that plants and other photosynthetic organisms served as the foundation of life on Earth. These photosynthesizers converted the sun’s energy into biomass, which then fed other species, which in turn fed still others. These fundamental insights eventually led to important advances in conservation biology. They helped conservation biologists understand, for example, how pesticides and other pollutants ended up so concentrated in the bodies of large predators like polar bears and tuna.

For decades, however, the best pictures of ecological networks remained extremely simple. It’s a lot harder to record the interactions of all the species in an ecosystem than it is to figure out the links between Web sites. Many ecologists also felt that it might not be worth fleshing out networks in too much detail. As networks became more focused and realistic, ecologists found that they became too complex to make sense of — let alone to yield any rules about ecological networks around the world.

But ecologists have started to shed that pessimism in recent years. They have seen how scientists like Barabasi have been able to extract meaningful lessons from full-blown networks. And so ecologists have borrowed these scientific methods to analyze networks without drowning in detail. 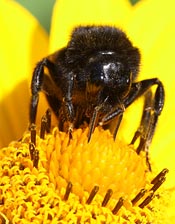 Their studies have shed new light on the biggest debates in ecology. Most plants, for example, depend on animals of one sort or another to spread their pollen. In some cases, scientists have discovered exquisitely co-evolved partners that specialize only on one another. For example, some flowers keep their nectar in deep recesses that can only be reached by flies with tongues stretching several inches in length. Other pollinators are far less picky, browsing many different species, and there are also flowers that don’t rely on a single species of pollinator.

Ecologists have argued over which kind of partnership — specialized or generalized — is most important in ecosystems. The answer has important practical significance. If many plant species each depend on just one pollinator, then they are exquisitely vulnerable to extinction if they lose their partner.

Jordia Bascompte, an ecologist at the Spanish Research Council, and his colleagues have traveled to a number of ecosystems to catalog the plants animal pollinators visit and which animals visit each plant. The picture is much the same from one ecosystem to another. But that picture doesn’t match the simple extremes in the pollination debate.

Most animals and plants only form partnerships with a few other species. A few generalist animals and plants interact with many species. Generalists form a highly-linked core of the network, interacting with other generalists. The specialists tend to interact with these generalists rather than with each other, with the result that the pollinator network is arranged around hubs. In other words, a field of wildflowers is a lot like Hollywood.

Like Hollywood, there’s a lot of competition between the players. A generalist moth, for example, will visit several species of plants in search of food. In some ways, each species of plant might be better off if the moth only visited it and no other species. The moth would spread more of its pollen, and so more of the plants would be able to make seeds.

But Bascompte’s research suggests that the benefits of the network outweigh any drawbacks. If the other species of plants visited by the moth can thrive, that means that the moths have nectar to eat. And that means they can make more moths—which in turn can make more visits to every individual plant species. By modeling these kinds of interactions, Bascompte has found that the small-world network of pollinators and plants fosters more biodiversity than other kinds of networks.

This arrangement not only fosters more biodiversity, but also makes ecological networks better able to withstand assaults. Losing a single species is unlikely to bring ecosystems crashing down, because most species in an ecological network are only linked to a few other species. As a result, its absence will have relatively small effect. On the other hand, if a hub species becomes extinct, there may be big trouble.

Recently, Bascompte and his colleagues drew the network of marine ecosystems in the Caribbean. They discovered that fish form interconnected clusters known as modules. In each module, the nodes are more connected to each other than to other nodes outside the module. Each module was organized around sharks, which acted as the top predators. Some modules contained a few species of sharks, but many included just one. The sharks may sort themselves into different modules as they avoid competing with one another for fish.

The Caribbean network is thus organized around sharks, with each species a highly connected hub in its particular module. That arrangement means that overfishing sharks could have an even bigger effect on marine ecosystems than ecologists have previously realized. As the population of a shark species dwindles, the other fish in its module will feel the effects. The fish the sharks eat will boom, in turn putting pressure on the species those fish eat. The structure of the entire network may change as well, as sharks take over modules that have lost their hubs. It’s possible that in this new arrangement, the entire food web may become fragile, and thus more vulnerable to a sudden collapse.

Network theory tells scientists that subtle changes to complex networks can trigger sudden changes. Financial markets, for example, can wobble up and down before collapsing. It may be possible to monitor ecosystems for early warning signals of collapse as well. The forest will tell ecologists more about trouble to come than any individual tree.