Carlos Perez, a well-to-do businessman, has been farming shrimp in Ecuador since 1979. He has seen the industry boom: Ecuador exported about $1.2 billion worth of shrimp last year, and its shrimp farmers employ about 102,000 people. He has also watched as shrimp farms have played a major role in the destruction of two-thirds of the country’s mangrove swamps — rich ecosystems that serve as buffers against storms, store carbon, and support fish, birds, and small mammals. 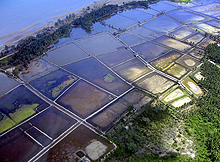 Sebastien Blanc/AFP/Getty Images
Shrimp farms encroach on mangrove swamps in Indonesia.
Â
Perez, who is 59 and grew up in the Galapagos Islands, has environmental credibility. A Georgia Tech-educated engineer, he was one of the inventors of a patented system to filter the water that flows out of fish farms. But the ASC standard for shrimp, which will be rolled out later this year, has run into resistance in the U.S. Big buyers of fish like Walmart and Darden, the restaurant chain, are instead working with an industry-led organization called the Global Aquaculture Alliance that has its own, less stringent certification standards. “With shrimp,” Perez says, “there’s going to be a huge battle.”

If this sounds familiar, it should. In industries ranging from forestry and food to electronics and apparel, U.S. and European companies — sometimes but not always working in concert with environmental groups — have set standards and established certification systems that are intended to improve environmental and social practices. Typically, they are designed to muster the power of consumers, retailers, and brand owners who want to deploy their buying power to drive change.

But settling on a standard is never easy. The Forest Stewardship Council (FSC), for instance, has since its beginnings in the early 1990s certified 160 million hectares (395 million acres) of forest in 80 countries; FSC approval assures buyers that certified wood and paper products come from well-managed forests where worker and community rights are respected. But while some timber companies embraced the FSC, others formed a rival association called the Sustainable Forestry Initiative, which promotes its own less-stringent standards and consumer-facing label. Such battles are confusing, and not uncommon.

Indeed, so many eco-labels have sprung up — would you like organic, Fair Trade, Rainforest Alliance-certified, or Bird-Friendly coffee? — that the Consumers Union has built a website to help people find their way through the thicket of competing claims. The Ecolabel Index, a global directory, tracks 433 eco-labels in 25 industry sectors.

The Aquaculture Stewardship Council, formed in 2009 by the World Wildlife Fund (WWF) and a Dutch coalition of businesses and nonprofits

Americans eat four pounds of shrimp per person per year, more than any other seafood.

called IDF, is developing standards for 12 species of farmed fish and crustaceans. None is more important — or controversial — than shrimp. Global demand for the pink crustaceans has outstripped the supply of wild-caught shrimp, with the United Nations’ Food and Agriculture Organization (FAO) describing shrimp stocks in the Pacific, Atlantic, and Indian oceans as depleted, overexploited, or fully exploited.

Aquaculture has stepped in to fill the gap. Increasing appetites, faltering ocean stocks, and technological advances have set off a 30-year-long shrimp boom in Asia and Latin America. Today, shrimp aquaculture generates an estimated $17 billion to $20 billion in annual revenues. China, Thailand, and Vietnam are the big producers, and the U.S. is the leading consumer: Americans eat about four pounds of shrimp per person, per year, more than any other species of seafood and three times as much as we ate back in the 1970s. (Canned tuna used to be No. 1.)

No one expects governments to deal with the environmental costs of shrimp farming. Jose Villalon, who leads WWF’s aquaculture program and is chairman of the ASC, says local authorities can’t be counted on to regulate fast-growing industries that create jobs. “The farms are out in the middle of nowhere,” he says. “Sometimes there’s no regulation. Sometimes there’s great regulation but no enforcement.” Villalon, 55, knows the industry well: He was trained as a fisheries biologist, and he worked as a shrimp farmer for 27 years in the Caribbean, Ecuador, and Mexico before joining WWF.

As chair of the ASC, his challenge is working with the industry, scientists, and other environmentalists to write rules for shrimp farms that are tough

Those who favor certification say there’s no guarantee that sustainably raised shrimp will fetch a higher price.

enough to make a meaningful difference, but not so stringent that they will be ignored. The 105-page draft standard published by the ASC focuses on farming and covers a long list of impacts: conservation of critical habitats and biodiversity, water pollution, disease prevention, predator control, energy efficiency, labor conditions, community impacts, stakeholder relations, and the critical fish-feed issue. “The standards are rigorous,” Villalon says. “They’re tough.”

Those who favor the ASC’s stringent standards acknowledge there’s no guarantee that sustainably raised shrimp will command a higher price. An independent study in the UK showed that frozen pollock bearing the MSC ecolabel fetched a price premium 14 percent higher than uncertified pollock. Stores also sold more of the MSC-labeled pollock. Villalon argues that major retailers should support high standards to protect the long-term health of fisheries, which are important to their business. For his part, Carlos Perez believes that shrimp farmers in Ecuador may be better able than their competitors in Southeast Asia to comply with tougher rules, giving them an edge in the market. Still, if certified seafood is unable to command a higher price from customers, the incentive for retailers is to adopt weaker rules, argues Rebecca Goldburg, director of the ocean science division at the Pew Environment Group.

This may explain why the Global Aquaculture Alliance-Best Aquaculture Practices standards — they’re known as the GAA-BAP — have been widely adopted in the U.S. The GAA-BAP standards are broader, covering shrimp hatcheries, feed mills, and processors, as well as farms. They are also easier to meet. In a comparison of marine aquaculture standards published last year by the Seafood Ecology Research Group at the University of Victoria in Canada, the GAA-BAP standard was ranked in the bottom half of 20 aquaculture standards, behind, for example, standards set by Whole Foods Market. Even so, the GAA-BAP rules are better than having no standard at all, some environmentalists say. “It can certainly help screen out products that are from particularly bad producers,” says Goldburg.

Peter Redmond, a former seafood buyer for Walmart who is now vice president for development at the Global Aquaculture Alliance, says the GAA-BAP standards are designed so that most shrimp farms will be able to achieve certification if they improve their practices. The standard emphasizes

One expert says the use of forage fish for feed is the most important global impact of shrimp farming.

food safety, a key concern among retailers. “It’s not a weak standard by any stretch of the imagination,” Redmond says. But it does require reading the fine print. Because the GAA-BAP certification applies to processors, as well as shrimp farms, companies like Darden, which buys about $750 million worth of seafood a year, can claim that “100 percent of the aquacultured shrimp processors that supply Darden are certified.” Note the reference to processors, and not farms, where the environmental footprint of aquaculture is greater.

One clear and meaningful difference between the two standards is that the ASC requires farms to limit the use of fishmeal derived from wild fish that is fed to farmed shrimp. It sets what is called a feed fish efficiency ratio (FFER) of 1.35 to 1 for L. Vannamei, or white shrimp. Villalon says that when he started in the industry the fish in-fish out ratio was about 3 to 1, but now it’s closer to 1.6 or 1.7 to 1. By adding soy-based meal to the feed mix, farmers can lower costs and ease the pressures on the forage fish like anchovies, herring, and menhaden that are caught to make fishmeal. Goldburg says the use of forage fish is the most important global environmental impact of shrimp farming. “When you take that many small fish out of the ocean, you are undercutting marine food chains,” she says. The GAA-BAP standard does not limit the use of fishmeal.

New Model for Aquaculture Takes Hold Far from the Sea

With ever-greater quantities of seafood coming from aquaculture operations, some companies are working on ways to reduce the environmental impact of fish farming. In a Yale e360 interview, Josh Goldman of Australis Aquaculture talks about his closed-containment fish farm in Massachusetts.READ MORE
Still, a standard can have an impact only if it is widely adopted, and the ASC is the underdog in this fight. Most of its support, so far, comes from the European Union, where a host of big companies including the Heiploeg Group, a Dutch firm that is the leading shrimp supplier in Europe, have signed on as supporters. In the U.S., Kroger and the Dutch firm, Ahold, which owns the Giant and Stop & Shop chains, are among the few companies to sign on. Many more — Walmart, Target, Supervalu, Food Lion, Harris Teeter, etc. — are working with GAP-BAA. “In the U.S. there’s been a very slow uptake,” Vilallon says. “We have an uphill battle.”

Unless consumption patterns change, one thing is certain: As the human population soars this century, fish farming will only become more important. As Brandon Tidwell, manager of sustainability for Darden, puts it: “The demand for seafood is going to grow exponentially, and wild seafood stocks are going to remain flat. So we are going to need aquaculture to fill the gap.”