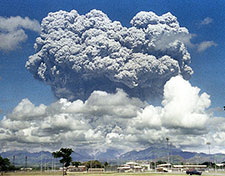 In 1991, Mount Pinatubo in the Philippines erupted in one of the largest volcanic blasts of the 20th century. It spat up to 20 million tons of sulfur into the upper atmosphere, shielding the earth from the sun’s rays and causing global temperatures to drop by nearly half a degree Celsius in a single year. That’s more than half of the amount the planet has warmed due to climate change in 130 years.

Now some scientists are thinking about replicating Mount Pinatubo’s dramatic cooling power by intentionally spewing sulfates into the atmosphere to counteract global warming. Studies have shown that such a strategy would be powerful, feasible, fast-acting, and cheap, capable in principle of reversing all of the expected worst-case warming over the next century or longer, all the while increasing plant productivity. Harvard University physicist David Keith, one of the world’s most vocal advocates of serious research into such a scheme, calls it “a cheap tool that could green the world.” In the face of anticipated rapid climate change, Keith contends that the smart move is to intensively study both the positive and negative effects of using a small fleet of jets to inject sulfate aerosols high into the atmosphere to block a portion of the sun’s rays.

Studies have shown that such a strategy would be powerful, feasible, fast-acting, and cheap.

Yet even Keith acknowledges that there are serious concerns about solar geoengineering, both in terms of the environment and politics. Growing discussion about experimentation with solar radiation management has touched off an emotional debate, with proponents saying the technique may be needed to avert climate catastrophe and opponents warning that deployment could lead to international conflicts and unintended environmental consequences — and that experimentation would create a slippery slope that would inevitably lead to deployment. University of Chicago geophysicist Raymond Pierrehumbert has called the scheme “barking mad.” Canadian environmentalist David Suzuki has dismissed it as “insane.” Protestors have stopped even harmless, small-scale field experiments that aim to explore the idea. And Keith has received a couple of death threats from the fringe of the environmentalist community.

Clearly, there are good reasons for concern. Solar geoengineering would likely make the planet drier, potentially disrupting monsoons in places like India and creating drought in parts of the tropics. The technique could help eat away the protective ozone shield of our planet, and it would cause air pollution. It would also do nothing to counteract the problem of ocean acidification, which occurs when the seas absorb high levels of CO2 from the atmosphere.

Some worry that solar geoengineering would hand politicians an easy reason to avoid emissions reductions.

Some worry that solar geoengineering would hand politicians an easy reason to avoid reducing greenhouse gas emissions. And if the impacts of climate change worsen and nations cannot agree on what scheme to deploy, or at what temperature the planet’s thermostat should be set, then conflict or even war could result as countries unilaterally begin programs to inject sulfates into the atmosphere. “My greatest concern is societal disruption and conflict between countries,” says Alan Robock, a climatologist at Rutgers University in New Jersey.

As Keith himself summarizes, “Solar geoengineering is an extraordinarily powerful tool. But it is also dangerous.”

Studies have shown that solar radiation management could be accomplished and that it would cool the planet. Last fall, Keith published a book, A Case for Climate Engineering, that lays out the practicalities of such a scheme. A fleet of ten Gulfstream jets could be used to annually inject 25,000 tons of sulfur — as finely dispersed sulfuric acid, for example — into the lower stratosphere. That would be ramped up to a million tons of sulfur per year by 2070, in order to counter about half of the world’s warming from greenhouse gases. The idea is to combine such a scheme with emissions cuts, and keep it running for about twice as long as it takes for CO2 concentrations in the atmosphere to level out.

Under Keith’s projections, a world that would have warmed 2 degrees C by century’s end would instead warm 1 degree C. Keith says his “moderate, temporary” plan would help to avoid many of the problems associated with full-throttle solar geoengineering schemes that aim to counteract all of the planet’s warming, while reducing the cost of adapting to rapid climate change. He estimates this scheme would cost about $700 million annually — less than 1 percent of what is currently spent on clean energy development. If such relatively modest cost projections prove to be accurate, some individual countries could deploy solar geoengineering technologies without international agreement.

‘The thing that’s surprising is the degree to which it’s being taken more seriously,’ says one scientist.

The idea of solar geoengineering dates back at least to the 1970s; researchers have toyed with a range of ideas, including deploying giant mirrors to deflect solar energy back into space, or spraying salt water into the air to make more reflective clouds. In recent years the notion of spraying sulfates into the stratosphere has moved to the forefront. “Back in 2000 we just thought of it as a ‘what if’ thought experiment,” says atmospheric scientist Ken Caldeira of the Carnegie Institution for Science, who did some of the first global climate modeling work on the concept. “In the last years, the thing that’s surprising is the degree to which it’s being taken more seriously in the policy world.”

In 2010, the first major cost estimates of sulfate-spewing schemes were produced. In 2012, China listed geoengineering among its earth science research priorities. Last year, the Intergovernmental Panel on Climate Change’s summary statement for policymakers controversially mentioned geoengineering for the first time in the panel’s 25-year history. And the National Academy of Sciences is working on a geoengineering report, funded in part by the U.S. Central Intelligence Agency.

Solar geoengineering cannot precisely counteract global warming. Carbon dioxide warms the planet fairly evenly, while sunshine is patchy: There’s more in the daytime, in the summer, and closer to the equator. Back in the 1990s, Caldeira was convinced that these differences would make geoengineering ineffective. “So we did these simulations, and much to our surprise it did a pretty good job,” he says. The reason is that a third factor has a bigger impact on climate than either CO2 or sunlight: polar ice. If you cool the planet enough to keep that ice, says Caldeira, then this dominates the climate response.

But there are still problems. Putting a million tons of sulfur into the stratosphere each year would probably “contribute to thousands of air pollution deaths a year,” Keith acknowledges. Because solar geoengineering doesn’t affect the amount of carbon dioxide in the air, ocean acidification would continue unabated. And sulfates would alter atmospheric chemistry toward formation of ozone-destroying chlorine compounds, which could lead to a moderate increase in skin cancers or ultraviolet damage to plant life. Sulfates would also make the sky a little whiter than usual and sunsets more dramatic, scientists say.

‘When you try to fix one problem you create other problems,’ warns one expert.

Basic physics shows that warming from sunlight boosts the planet’s water cycle more than warming from carbon dioxide. This is because sunlight adds more energy to the system, like turning up the heat on a stove under a pot of water, while carbon dioxide simply puts a lid on the pot. So counteracting greenhouse warming by reducing sunlight would likely make the planet drier — models predict a 1 percent reduction in rainfall for every degree Celsius of warming counteracted, says Axel Kleidon of the Max Planck Institute for Biogeochemistry in Jena, Germany. “When you try to fix one problem you create other problems,” says Kleidon, who opposes pursuing such techniques.

The Geoengineering Model Intercomparison Project (GEOMIP) recently looked at how solar alterations might affect regional climate patterns. It concluded that the tropics would be over-cooled and the poles under-cooled. While the project concluded that solar radiation management would likely protect more than 90 percent of the globe from the serious changes in rainfall predicted from climate change, summer monsoons might start to dry up, requiring a change in agriculture or water storage systems to adapt to the new climate.

The upshot is that things would get better for some people and worse for others, though the details are hard to predict. Rice production might go down in China because of water cycle changes for example, but could increase because of increased carbon dioxide to feed the plants, says Caldeira. Despite the drop in sunshine, crop productivity would probably increase worldwide because of higher atmospheric concentrations of CO2.

Keith concludes it ‘makes sense to move with deliberate haste towards deployment of [solar] geoengineering.’

Because sulfates only remain in the atmosphere for a few years, a geoengineering program could be stopped at any time if unanticipated disaster ensues. But then the temperature would race upward as the planet readjusts to the amount of carbon dioxide in the air. If geoengineering were used to counteract 2 degrees C of warming over 50 years, for example, that 2 degrees of warming would come back quickly once the geoengineering stops. And there is no governance system at present to oversee if and how a program should start or stop. A group called The Solar Radiation Management Governance Initiative has held a few workshops in recent years to discuss these questions.

Such concerns have led some people to take a hard-line stance against any kind of geoengineering. This started with environmental organizations like ETC Group protesting against iron fertilization of the seas — an idea meant to stimulate phytoplankton growth and so suck up carbon dioxide from the air, which controversially interferes with the base of the ocean’s food chain. This led to a 2008 Convention on Biological Diversity moratorium against iron fertilization, which in 2010 was expanded to any geoengineering.

Rising Waters: How Fast and How Far Will Sea Levels Rise?

Although the latest U.N. climate report significantly increases its projections for sea level rise this century, some scientists warn even those estimates are too conservative. But, Nicola Jones reports, one thing is certain: Predicting sea level rise far into the future is a very tricky task.READ MORE

These agreements are non-binding, but still have influence, even on apparently harmless experimentation. When the Stratospheric Particle Injection for Climate Engineering (SPICE) research group attempted to run a small field experiment in 2011 to spray water into the air from balloons as a way of testing a stratospheric delivery system, protestors forced the group to stop. This irritates Caldeira. “I think it’s very dangerous to tell scientists that an experiment with no risk in itself cannot be performed because we don’t like what it might lead to,” he says.

To date, no solar geoengineering field trials have taken place, aside from a study or two looking at the idea of seeding more reflective clouds. Keith argues that some experiments would be good to test the risks and efficacy of such a strategy, and he has proposed a meeting of researchers to hash out a list of suitable work that should be done. He and his colleagues are currently planning experiments that would inject less than a hundred kilograms of aerosol material into the stratosphere in order to investigate some of the ensuing chlorine chemistry. They haven’t yet gotten to the stage of an official proposal.

But Robock argues that while modeling and indoor experiments should be pursued, outdoor field trials are problematic. “You can’t see a climate response unless an experiment is so large as to actually be geoengineering,” Robock says.

Keith concludes that it “makes sense to move with deliberate haste towards deployment of geoengineering,” so long as early work supports the theoretical promise of the technique. Caldeira is less bullish, saying, “Climate change is not going to extinguish us as a species. Geoengineering will always be a decision, not a necessity.”