After the Durban talks last month, climate realists must face the reality that “shared sacrifice,” however necessary eventually, has proven a catastrophically bad starting point for global collaboration. Nations have already spent decades debating who was going to give up how much first in exchange for what. So we need to seek opportunities — arenas where there are advantages, not penalties, for those who first take action — both to achieve first-round emission reductions and to build trust and cooperation.

One of the major opportunities lies in providing energy access for the more than 1.2 billion people who don’t have electricity, most of whom, in business-as-usual scenarios, still won’t have it in 2030. These are the poorest people on the planet. Ironically, the world’s poorest can best afford the most sophisticated lighting — off-grid combinations of solar panels, power electronics, and LED lights. And this creates an opportunity for which the economics are compelling, the moral urgency profound, the development benefits enormous, and the potential leverage game changing. 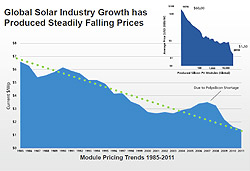 Solar Services Program
VIEW GRAPHS: The costs of solar panels (above) and LEDs have dropped steadily over the last 25 years, while the costs of the ingredients of conventional grid power — coal and copper — have soared.

If we want the poor to benefit from electricity we cannot wait for the grid, and we cannot rely on fossil fuels. The International Energy Agency, historically a grid-centric, establishment voice, admits that half of those without electricity today will never be wired. The government of India estimates that two-thirds of its non-electrified households need distributed power.

Fortunately, the historic barriers to getting distributed renewable power to scale in poor villages and neighborhoods are rapidly being dismantled by progress in technology, finance, and business models. Getting 1.2 billion people local solar power they can afford is within grasp — if we only think about the problem in a different way. In fact, the world can finish this job by 2020.

The poor already pay for light. They pay for kerosene and candles. And they pay a lot. The poorest fifth of the world pays one-fifth of the world’s lighting bill — but receives only .1 percent of the lighting benefits. Over a decade, the average poor family spends $1,800 on energy expenditures. Replacing kerosene with a vastly superior 40 Wp (Watts peak) home solar system would cost only $300 and provide them not only light, but access to cell-phone charging, fans, computers, and even televisions.

Kerosene often costs 25 to 30 percent of a family’s income. Yet the poor must rely on this expensive, dirty fuel.

Kerosene costs 25 to 30 percent of a family’s income — globally that amounts to $36 billion a year. The poor do not use kerosene because it is cheap — they are kept poor in significant part because they must rely on expensive, dirty kerosene.

And the poor pay in other ways. A room lit by kerosene typically can have concentrations of pollution 10 times safe levels. About 1.5 million people, mostly women, die of this pollution every year, in addition to those who die from burns in fires.

So why do the poor use kerosene? Because they can buy a single day’s worth in a bottle, if that is all they can afford. For the poor, affordability has three dimensions: total cost, up-front price, and payment flexibility. Solar power comes in a panel that will give ten, or even 20, years of light and power — but the poor cannot afford a ten-year investment up front. And many cannot handle conventional finance plans, which require fixed payments regardless of their income that month.

Nor, for the record, do the electrified middle class pay for electricity up front. When I moved into my house in San Francisco, I did not get a bill for my share of the power plants and transmission grid that give me power each month. I pay as I go, based on how many kwh’s I use that month.

The money is on the table. It’s just on the wrong plates. Purchase and finance of solar power for 1.2 billion people would cost about $10 billion a year over a decade. The 11 countries with the largest number of households without electricity spent $80 billion each year subsidizing fossil fuel — only 17 percent of which benefits the poor. In 2010, the World Bank spent $8 billion on coal-fired power plants, few of which provided meaningful energy access to the poor. The UN’s Clean Development Mechanism is proposing to give $4 billion a year to anything-but-clean coal-plants. So there is already far more capital in the system than is needed.

Even five years ago the business models did not exist to enable the poor to afford solar. Solar was much more expensive. The only alternative to buying a solar system with cash was a bank or micro-credit loan for which most of the poor could not qualify.

Cell phone companies have a powerful motivation to get renewable power into rural areas.

But the combination of dirt-cheap solar, the cell-phone revolution, and mobile phone banking has changed everything. There are almost 600 million cell-phone customers without electricity — using their phones very little, still spending $10 billion to charge them in town. There are hundreds of thousands of rural, off-grid cell towers powered by diesel — at a price of about $0.70/kilowatt hour. All over the world cell-phone towers are being converted from diesel to hybrid renewable power sources. So cell phone companies have a powerful motivation to get renewable power into rural areas, to get electricity to their customers, and to charge for electricity through their mobile phone payment systems.

At least three commercial models have been launched in the last several months. India’s Simpa Networks — in partnership with SELCO in India and DT-Power in Ghana, India and Kenya — are testing models in which solar distributors can allow customers to pay for electricity through mobile banking “pay as you go” plans. Zimbabwe’s Econet Power has launched an even more intriguing model, in which it provides its cell-phone customers with solar power as a customer benefit, charging them only $1 week to use a home solar system provided by Econet, with the bills tied to the customer’s cell phone account.

UN Secretary General Ban Ki-moon has proclaimed 2012 the Year of Universal Energy Access. His initiative is keyed not to the UN climate talks, but to the Rio +20 Earth Summit talks scheduled for June.

Imagine that at Rio, instead of embracing business-as-usual solutions to energy access, the world decided to empower the poor with the electricity they can truly afford — distributed solar?

What would the benefits be? In carbon terms alone, kerosene for lighting emits almost as much greenhouse-gas pollution as the entire British economy. 1.5 million lives a year would be saved from respiratory ailments. The available income for the world’s poorest fifth would be increased by 25 to 30 percent — a pretty big development bang-for-the-buck. Numerous studies have shown that providing basic energy access increases household income by 50 percent or more by providing more time and opportunities for home-based income generation.

But the leverage is actually much greater. If one-fifth of the world is on solar, as these people prosper and can afford more electricity, they are going to expand solar systems, rather than turning to coal or nuclear. Their neighbors include the one-third of humanity with “spasmodic” electricity — wires that in rural areas work only at night, and in urban areas go down in the afternoon. These customers would find distributed solar far more reliable than the current grid. If we add those 2 billion to the 1.2 billion who are not on the grid, virtually half of humanity could be turning to renewable power as the cheapest, most reliable and most available form of energy. The fossil fuel interests would lose completely their current moral argument — that more carbon will power the poor.

That, I would argue is a phenomenal game-changer — and a powerful first step in building a trusting, low-carbon coalition of rich and poor nations. And that coalition could lay the groundwork for the more challenging global efforts that will be needed to stabilize and eventually restore the climate.