Now that George W. Bush is not around to misinterpret, it is probably safe to point out something climate negotiators rarely mention. There are quite a few countries out there that don’t have targets to cut their carbon dioxide emissions, but who really ought to. They are not poor, and they are not low emitters. They are climate freeloaders.

I am not talking about large Asian countries like India or Indonesia or even China, where national emissions may be large but per capita emissions remain very low by rich-world standards. The average Indian is responsible for roughly a tenth the emissions of the average American. Even the average Chinese has emissions only around a quarter those of the average American (as I mentioned in a previous article here), and a good proportion of that is produced while making goods to sell to the West.

We, the big emitters, have to engage countries like China and India in taking action, if we are to stave off climate change. But we have to do that from a position of humility — admitting that, sorry, but we have used up most of the available atmospheric space for greenhouse gases.

What I am talking about here, however, is a growing list of rapidly industrializing countries that don’t have targets under the existing Kyoto Protocol, but have emissions rates that are now often above those of many longtime industrialized nations that do have targets. Moreover, while the Kyoto countries are cutting emissions, the non-Kyoto countries are mostly raising them — and fast.

These are places as different as Malaysia, Saudi Arabia, Israel, and South Korea. None of these countries currently seem likely even to be asked to adopt targets in Copenhagen later this year, when the successor agreement to the 1997 protocol is set to be decided. And that seems increasingly crazy — not only unfair, but also damaging to any real effort to tackle climate change.

When the Kyoto Protocol was signed in 1997, it set targets for industrialized countries, including member nations of the Organization for Economic Cooperation and Development, the former Soviet bloc and Japan. But emerging industrial countries were left out, partly through political expediency and partly because their emissions didn’t seem to matter much. Now they do.

The trend is revealed in disturbing detail in estimates of national emissions for 2007 recently published by the U.S. government’s Oak Ridge National Laboratory in Tennessee, a widely respected international monitor. 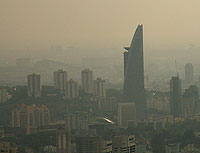 Malaysia’s per capita emissions of carbon dioxide exceed the rates of China, India and France. FLICKR

Take Malaysia, which for all intents and purposes is now an industrialized country and has carbon dioxide emissions that reflect that — emissions produced from the energy used to run factories, vehicles, and air-conditioning systems. By 2007 Malaysia had increased its total emissions fourfold since 1990, from 15 million tons of carbon to 68 million tons. (1990 is the base year used for calculating emissions reductions for countries under the Kyoto Protocol.)

Malaysia — which has a GDP greater than many European countries — now emits slightly more carbon dioxide per capita than Britain, which at 2.47 tons per head is a fairly middle-range European country. But while Britain is on course to meet its Kyoto target of a cut of 12.5 percent from 1990 levels, Malaysia can carry on raising its emissions as much as it likes.

U.S. per capita emissions, incidentally, are currently 5.3 tons of carbon, according to Oak Ridge. At the other extreme, those of Bangladesh are 0.08 tons.

A host of other Asian countries that we used to call “tiger economies” are in the same situation as Malaysia, and for similar reasons — they continue to increase their emissions above the levels of Kyoto countries that are trying hard to reduce theirs.

Taiwan’s emissions have doubled since 1990. Its per capita emissions are ahead of most of Europe. But it has no targets.

Likewise South Korea, which recently nudged above its neighbor Japan in per capita emissions. Yet while Japan has targets, South Korea does not. South Korea has been in the OECD club of rich nations since 1996, but on climate it still conveniently sits with the poor countries.

This must be a trifle embarrassing for South Korea’s most famous envoy, UN Secretary-General Ban Ki-moon, who is fast winning a personal reputation on climate change. Unlike his predecessor, Kofi Annan, he regularly turns up at climate negotiations, as he did in talks in Poznan, Poland, in December. In Bali in late 2007, his aggressive intervention saved the process from possible collapse. Perhaps it is time he devoted some energy to getting his home country on board.

A second group of countries with soaring emissions are in the Gulf region, where the huge energy demands from desalinating seawater often add to the emissions from industrialization, affluence, and profligate use of all the cheap local oil. This month, Abu Dhabi held a much-heralded world future energy summit. Tony Blair was there. Part of its purpose was to showcase a new “green city” Abu Dhabi is building called Masdar. Well, it’s a badly-needed start. Abu Dhabi is part of the United Arab Emirates, whose emissions have gone from 15 million tons of carbon in 1990 to 37 million tons in 2007. Its per capita emissions are now above those of the United States.

Since 1990, Saudi Arabia has doubled emissions, which at 4.5 tons of carbon per head are close to those of the United States. Bahrain, at 7.4 tons per head, is well ahead of the U.S. And Kuwait, which similarly has more than doubled emissions, has a per capita figure double that of the U.S. (Not far away, in Israel, emissions have doubled since 1990 and, per head, are now edging past Britain’s). 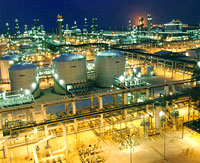 Qatar, which has increased its carbon emissions nearly fivefold since 1990, is the world’s largest exporter of liquified natural gas. QATAR LIQUEFIED GAS COMPANY

But the super-performer in the Gulf, the country that should rightly be crowned as the world’s worst carbon criminal, is Qatar. It is small — occupying a sand spit in the Gulf about the size of Connecticut. But its emissions in 2007 were 16 million tons, compared to 3.3 million tons in 1990. Most of the emissions come from its huge gas extraction industry, which is largely for export. But shared out among its population of 825,000, the emissions come to 19.3 tons of carbon per head, or almost eight times those of Britain, and considerably more than three times those of the U.S.

That’s a record — well, unless you count the U.S. Virgin Islands, which Oak Ridge records show emitted more than 25 tons of carbon per head in 2002, the most recent year for which figures are available. Much of the Virgin Islands’ emissions are from one of the world’s largest petroleum refineries.

Clearly we have a problem here. To label countries like Qatar and Taiwan as “developing” is a myth. It is certainly true that they have been emitting carbon in substantial amounts for far less time than Europe or North America. But it is increasingly untenable for them to hide at international negotiations with the nations of Africa and poor parts of Asia, piously opposing any emissions cuts for the developing world.

Give us a break. Kuwait and Saudi Arabia and South Korea and the rest are not poor nations.

In any international negotiations, we need fairness in allocating emissions targets. And that, I believe, means allocations based on population size. We might need some separate rules for nations that still have fast-rising populations (though I can’t believe that any country would surreptitiously boost its population to get a few more emissions permits). But long term we should be headed for national entitlements based on population.

My favorite formula is called “contraction and convergence,” developed by a splendidly single-minded, violin-playing South African living in London named Aubrey Meyer, and publicized through his NGO,
the Global Commons Institute.

Under his concept, we would listen to what scientists are saying and contract global emissions so as to stabilize concentrations of greenhouse gases in the atmosphere. But then we would apportion emissions entitlements according to a formula that gradually would converge national targets toward a level based strictly on population.

Of course, countries would be free to trade their entitlements — so the U.S. could buy from India, and so on. But the initial allocations would be transparent and equitable. It would take all the horse-trading out of the international negotiations.

I recommend you check out the graphs of how this could happen on Meyer’s web site — especially if you work for the Obama team that is deciding how to approach climate change negotiations this year. Like me you may be left wondering why the world didn’t adopt this simple formula long ago.

In London this week, the UN’s chief climate diplomat, Yvo de Boer, said he thought that “in the long run,” emissions targets based on population were the way to go. So why not now? My proposal for Copenhagen is that governments grab the chance to think afresh on climate, and adopt this long-term solution that does away with the ridiculous anomalies that currently exist.