In 1978, when few researchers were paying attention to global warming, a prominent geologist at Ohio State University was already focused on the prospect of fossil fuel emissions trapping heat in the Earth’s atmosphere. His name was John H. Mercer, and when he contemplated what might be in store for the planet, his thoughts naturally gravitated to the biggest chunk of ice on Earth — Antarctica.

“If present trends in fossil fuel consumption continue…” he wrote in Nature, “a critical level of warmth will have been passed in high southern latitudes 50 years from now, and deglaciation of West Antarctica will be imminent or in progress… One of the warning signs that a dangerous warming trend is under way in Antarctica will be the breakup of ice shelves on both coasts of the Antarctic Peninsula, starting with the northernmost and extending gradually southward.”

Mercer’s prediction has come true, and a couple of decades before he anticipated. Since he wrote those words, eight ice shelves have fully or partially collapsed along the Antarctic Peninsula, and the northwestern Antarctic Peninsula has warmed faster than virtually any place on Earth. 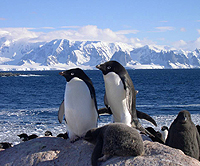 Photo by Fen Montaigne
Adélie penguins have been particularly hard-hit by the rapid warming of the northwestern Antarctic Peninsula.

The question now, as humanity pours greenhouse gases into the atmosphere at an accelerating rate, is not whether Antarctica will begin to warm in earnest, but how rapidly. The melting of Antarctica’s northernmost region — the Antarctic Peninsula — is already well underway, representing the first breach in an enormous citadel of cold that holds 90 percent of the world’s ice.

Much attention has rightly been paid to the precipitous warming of the Arctic, where Arctic Ocean ice is rapidly shrinking and thinning, Greenland’s large ice sheets are steadily melting, and permafrost is thawing from Alaska, to Scandinavia, to Siberia.

But none of the earth’s ice zones, or cryosphere, can compare with Antarctica, which is 1 Â½ times the size of the United States — including Alaska — and is almost entirely covered in ice, in places to a depth of three miles. The Antarctic accumulated this unfathomable volume of ice because it is a continent surrounded by ocean — the Southern Ocean — which acts like a great, insulating moat around the South Pole. The Arctic, by contrast, is an ocean surrounded by continents, whose landmasses moderate the polar climate.

How cold is the Antarctic? How about -128.6 degrees F cold, which is the lowest temperature ever recorded on Earth, as measured at the Soviet Antarctic base, Vostok, on July 21, 1983. The polar plateau, where legendary explorers such as Robert Falcon Scott perished, routinely records temperatures of -70 or -80 degrees F in winter. So it will be quite some time before the heart of Antarctica’s vast ice dome begins to melt.

The periphery, however, is another matter, and steady warming there has the potential to raise global sea levels many feet and to affect global ocean circulation.

‘We are going to get to a point where sea ice won’t form anymore, and that could be catastrophic.’

In addition, ice shelves — large slabs of ice that flow off the land or out of submarine basins and float atop the ocean — have been disintegrating up and down the peninsula. The most notable breakup occurred in early 2002, when several summers of warm weather heated up the surface of the Larsen B Ice Shelf, creating countless melt ponds that enabled warmer water to seep down into the ice shelf. That led in March 2002 to what’s known as a “catastrophic” break-up; the ice shelf, once the size of Connecticut, shattered in a matter of days.

“We are already at the point where the changes we’re seeing in this part of Antarctica are unprecedented throughout the entire period of human civilization,” said Ted Scambos, the lead scientist at the National Snow and Ice Data Center in Boulder, Colo.

The level of warming in Antarctica is far more severe than global warming of the past century, which has been about 1.4 degrees F. One major cause is that the warming of landmasses and oceans to the north has set up a sharper contrast with Antarctica’s intense cold. That has led to a strengthening of northerly winds, pulling far warmer air down from the south Pacific and south Atlantic onto the Antarctic Peninsula.

“One of the fundamental laws of thermodynamics is that heat always goes from warm to cold,” said Douglas Martinson, an oceanographer and Antarctic specialist at Columbia University’s Lamont-Doherty Earth Observatory. 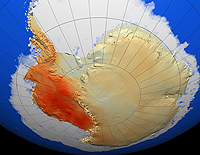 The physical changes — especially the drop in sea-ice duration — have had major ecological effects. Ice-dependent organisms, including certain species of phytoplankton, are declining where sea ice is disappearing. The most important link in the Antarctic food chain — ice-dependent Antarctic krill, on which just about every seabird or marine mammal in Antarctica feeds — also appears to be in decline. (One study suggested that krill in the southwestern Atlantic sector of Antarctic waters had fallen by 80 percent, but other krill specialists think the decline is not nearly so steep.)

At the top of the Antarctic food chain, AdÃ©lie penguins are suffering where warming is most pronounced. Not only is their winter feeding platform — sea ice — shrinking. But the main components of their diet — Antarctic krill and Antarctic silverfish, both of which are ice-dependent — are in shorter supply. As a result, AdÃ©lie penguin populations in the northwestern Antarctic Peninsula have plummeted by 75 percent and more. Ice-avoiding species, such as gentoo and chinstrap penguins, are moving in.

“We are seeing the creation of a new ecosystem for which there is no precedent,” said Hugh Ducklow, a phytoplankton specialist at The Ecosystems Center at the Marine Biological Laboratory in Woods Hole, Mass. and head of a major long-term climate change study along the western Antarctic Peninsula. “There is an entire, distinct ecosystem just living in and on the ice. So as sea ice begins to decline and then fails to form, as is now happening very rapidly, all these organisms that depend on the timing and the existence and extent of sea ice for their successful feeding and breeding will be high and dry. If the warming continues, we are eventually going to get to the point where sea ice won’t form anymore, and that would be catastrophic to the system.”

If the Western Antarctic Ice Sheet eventually melts, sea levels could rise by 16 to 20 feet.

Not only are air temperatures rising. Changing atmospheric and oceanic circulation patterns around Antarctica have caused the deep, Antarctic Circumpolar Current to be funneled up onto the continental shelf in western Antarctica. In winter, that water can be as warm as 37 degrees F, which sounds cold, but in fact is considerably warmer than the surface water — which hovers around 32 degrees F — and vastly warmer than air temperatures, especially in winter. This huge volume of relatively warm water on the continental shelf is having an enormous impact, since water holds 1,000 times more heat than air.

“This Circumpolar Current water is just blisteringly hot,” said Martinson, speaking in relative terms. “The penguins down there will have to put on baggies and sunglasses!” In Martinson’s mind, rising ocean temperatures have played the key role in the warming of the Antarctic Peninsula and the melting of ice shelves, glaciers, and sea ice.

Of particular concern to scientists is the effect of this warmer water on the Pine Island and Thwaites glaciers, located at 75Â° South, below the Antarctic Peninsula. Robert Bindschadler, a senior fellow at the Goddard Space Flight Center and an expert on Antarctic ice, believes that the warmer waters are melting the submerged undersides of the ice shelves attached to these glaciers, causing them to grow thinner; in places, the Pine Island Ice Shelf is thinning at a rate of 160 feet a year, and the melting is effectively loosening the grip of the Pine Island Glacier on the sea floor, causing the vast river of ice behind it to accelerate into the sea. The Pine Island Glacier is now charging into the Amundsen Sea at a rate of about two miles a year.

A longtime researcher expects AdÃ©lie penguins to disappear in the region in his lifetime.

Bindshcadler said that if all the ice from the ice streams feeding the Pine Island and Thwaites glaciers were to flow into the Southern Ocean, global sea levels could increase by five feet, inundating low-lying coastal areas from Florida to Bangladesh. Such an event, he said, could happen in the next half-century. Should the ice from the far-larger Western Antarctic Ice Sheet eventually melt, global sea levels could rise by 16 to 20 feet, according to Bindschadler and other researchers.

The biggest repository of Antarctic ice is on the polar plateau and the enormous ice sheets of East Antarctica. Although some studies have shown that most of Antarctica is cooling slightly, the most comprehensive survey to date — published last year in Nature — showed that Antarctica overall warmed 1 degree F between 1957 and 2007. Some inland areas in West Antarctica have warmed by 2.7 degrees F. That warming has extended to the Transantarctic Mountains, just several hundred miles from the South Pole.

The changing atmospheric circulation patterns around Antarctica have, in places, dragged more frigid air off the polar plateau and cooled some parts of the continent. One portion of the Ross Sea, for example, is colder and has actually seen sea ice grow in recent years.

But Antarctic climate experts say the long-term temperature trend in Antarctica is almost certainly heading straight up, which is bad news for the continent’s two ice-dependent penguin species — the AdÃ©lie and the far-larger emperor, featured in the movie “March of the Penguins.”

One of Antarctica’s premier penguin researchers, David Ainley, and two colleagues recently forecast the impact on these two polar penguin species if global temperatures rise 2 degrees C — 3.6 degrees F — above pre-industrial levels, something that almost certainly will occur this century. They concluded that AdÃ©lie and emperor penguin colonies north of 70Â° South — comprising half of Antarctica’s 348,000 pairs of emperor penguins and three-quarters of the continent’s 2.5 million pairs of AdÃ©lies — “are in jeopardy of marked decline or disappearance, largely because of severe decreases in pack-ice coverage and, particularly for emperors, ice thickness.”

Bill Fraser, who has devoted three decades of his life to studying penguins and other seabirds on the northwestern Antarctic Peninsula, has seen populations of AdÃ©lie penguins in his study area fall from more than 30,000 breeding pairs in 1975 to 5,600 pairs today. He expects AdÃ©lies to disappear in the region in his lifetime.