For the past nine years, seafood industry executives and marine conservationists have met in a European or North American city to talk about sustainability at the annual Seafood Summit. This year, they’ll meet in Hong Kong. It’s a sign that market-based efforts to make fishing and aquaculture more environmentally friendly are spreading from Europe and the U.S., where eco-labeling schemes like the Marine Stewardship Council’s (MSC) were first launched, to Asia, where most of the world’s fishermen, fish farmers, and seafood consumers live. 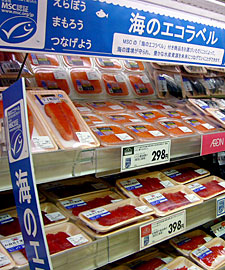 Â Marine Stewardship Council
Japan’s largest supermarket chain, Aeon, has set up displays featuring seafood certified by the Marine Stewardship Council.
Â
So far in Asia, wealthy, seafood-loving Japan is leading the way. Yes, Japanese fishing boats still hunt whales under the guise of scientific research. Fishermen continue to kill dolphins in Taiji’s now-infamous coves, and Tokyo sushi lovers still feast on endangered Atlantic bluefin tuna. But at the same time, consumers and corporations here are becoming some of the first in Asia to put their buying power to work for the cause of sustainable seafood.

Signs of the nascent revolution could be found on a recent afternoon in the sprawling fish display of a chain grocery store in Nagano Prefecture, three hours from Tokyo. There, nearly hidden among the piles of attractively packaged seafood and the red flags blaring “The more you buy, the cheaper it seems!,” sat several dozen Styrofoam trays of salmon and trout roe, salted mackerel, and salmon steaks bearing the MSC logo, signifying that the fish had been sustainably caught.

Japan consumes six percent of the world’s fish harvest and imports more seafood than any other country.

at the store every day, said she’d never noticed the small blue-and-white label.Â  She is worried about the state of the world’s oceans, however. “Programs about overfishing are on TV all the time lately — if we harvest too many fish there won’t be any left,” she said, adding that fishermen and government regulators, not consumers, must fix the problem.

The Food and Agriculture Organization of the United Nations estimates that more than 80 percent of the world’s fish stocks are fully exploited, overexploited, or recovering. Like Yamaguchi, many Japanese are aware of those dismal figures. Yet eating seafood is a central part of national food culture — so much so, says Greenpeace Japan’s oceans campaign manager Wakao Hanaoka, that “some people think they have a right to eat it, and they don’t want outsiders telling them not to.” That, along with other cultural and institutional factors, means the notion of sustainable seafood still faces an uphill fight in Japan.

If more Japanese consumers embrace seafood sustainability, they could have a significant impact on ocean ecosystems. The Japanese eat six percent of the world’s fish harvest, 81 percent of its fresh tuna, and a significant chunk of all salmon, shrimp, and crab. Japan also imports more seafood than any other country and caught 4.2 million metric tons of fish in 2008.

“Japan is an incredibly powerful player in fisheries and as a market,”

The total market share for MSC-labeled products in Japan remains below one percent.

says Adam Baske, an international policy officer at the Washington, D.C.-based Pew Environment Group. Japan demonstrated its dominance at the 2010 meeting of the Convention on International Trade in Endangered Species, where Japanese officials allegedly pressured representatives from Asia, Africa, and other regions to join them in voting down a proposed ban on international trade in Atlantic bluefin tuna. Turning that power toward conservation, Baske says, represents “an incredible opportunity.”

Quite a few international environmental organizations seem to have had the same idea recently. In the past six years WWF, Greenpeace, and the Sustainable Fisheries Partnership have all launched seafood campaigns in Japan. Greenpeace has published a Japanese-language guide to threatened seafood, and WWF plans to release 50,000 copies of its own guide later this summer.

While persuading consumers in seafood-centered Japan to purchase sustainably caught fish is a particular challenge, the fact remains that

As is the case globally, Japanese corporations, rather than consumers, have provided most of the momentum.

influencing the public’s seafood-buying choices remains a daunting challenge worldwide. The MSC has certified 168 fisheries — ranging from Alaskan salmon to Argentine anchovies — as sustainable, representing about 8 percent of the world’s annual harvest of wild fish. The organization is now assessing another 116 fisheries. Consumers in Europe are increasingly attuned to whether the seafood they’re purchasing is sustainable. But numerous analysts believe the most important progress is being made on the corporate front, where international giants such as Unilever, Wal-Mart, and McDonalds are buying larger quantities of certified seafood.

In Japan, a domestic fishing-industry organization launched its own seafood standard in 2007, called Marine Eco-Label Japan (MEL Japan). MEL Japan secretariat staff member Masashi Nishimura says the scheme, which has certified 13 fisheries and 45 processors and distributors to date, was a proactive response to international trends. “When it comes to managing Japan’s fisheries, Japanese actors have been doing it longer than anyone else,” says Nishimura. “There was a need for a Japanese-run scheme.” Â MEL Japan encourages traditional systems of voluntary, fishermen-led resource allotment called “co-management.”

But critics say co-management has done little to prevent the decline of coastal fish stocks, 40 percent of which are rated in poor condition by Japan’s Fisheries Research Agency. They also point out that MEL Japan, whose secretariat is run by an industry association and whose certifier is a non-profit organization that includes fisheries industry representatives on its board, is hardly in a position to impartially evaluate those fisheries. (MSC, too, has been widely accused of certifying fisheries that are not sustainable.) Nevertheless, MEL Japan is a sign that some fishermen think eco-labels will help them sell fish because customers are starting to care about sustainability.

As is the case globally, Japanese corporations, rather than consumers, have provided most of the momentum so far. Aeon, Japan’s largest supermarket chain, began enthusiastically promoting MSC-certified seafood in 2006, but spokeswoman Miho Takahama says the company was not motivated by consumer demand. “Back in 2006, customers were like, ‘What’s MSC?’ she says. “We wanted to proactively introduce sustainably harvested fish as a way to protect marine resources and secure a steady, long-term supply of fish. To do that, we had to raise customer awareness about MSC.”

The Japanese are angry with environmental groups because of campaigns to end whaling and dolphin hunting.

five supermarket chains to sell less of certain threatened species like eel and tuna, suggests retailers may have more near-sighted motivations as well. “The food retail market is quite saturated and competitive,” he said. “Brand image is very important.” And corporate-centered strategies for reforming the seafood industry may be particularly critical in Japan, where environmental groups have little lobbying power and are not often able to force regulatory change. In contrast, the fishing industry enjoys strong links to regulatory agencies.

“After World War II, Japan promoted its fishing industry because there was a lack of protein,” explains Toshio Katsukawa, an associate professor of fishery management at Mie University. “Catching as many fish as possible was the policy objective. It worked.” He says that while the industry has declined since its peak in the 1960s and 70s, policy still focuses on supporting rather than aggressively regulating fisheries. Retired bureaucrats regularly cycle into top posts at fishing industry organizations, and politicians compete for fishermen’s votes.

Katsukawa says most consumers don’t have the information they need to challenge overly cheery government narratives about fisheries. “It’s a problem of education,” he says. “People are taught that eating many fish is a good thing because it supports Japanese culture.”

A Corporate Approach to Rescuing the World’s Fisheries

The commitment by Wal-Mart, McDonald’s, and other major companies to buy only sustainably-caught seafood is an encouraging sign in an otherwise bleak global fisheries picture. After decades of government inaction and ineffective consumer campaigns, corporate pressure may finally be starting to turn the tide on reckless overfishing.READ MORE
Environmental organizations do offer alternative information, but they are smaller, weaker, and poorer than their counterparts in the U.S. and Europe. When environmental groups bring up fish, they face an additional challenge: anger over controversial campaigns by Sea Shepherd, Greenpeace, and others to end whaling and dolphin hunting.

But Aiko Yamauchi, WWF Japan’s fishery and seafood project leader, sees sustainable seafood as a positive way to approach the issue. “We’re trying to improve troubled fisheries, not just tell people to avoid eating fish,” she says. “The global movement is not opposed to Japanese culture.”

That approach is slowly starting to work. Ultimately, however, trends that have nothing to do with sustainability may dwarf the progress WWF and other organizations have made in Japan. Fish consumption is falling as people buy more meat and convenience foods, and annual fish harvests have fallen by more than half since 1985 as both fishing communities and fish stocks decline. Â

Meanwhile, aquaculture production, fish processing, and seafood consumption are all booming in neighboring China, which now consumes about one third of the world’s fish. MSC plans to open an office there and another in Singapore in the near future. Whether lessons from Japan prove useful remains to be seen.