The River Jordan has flowed freely for thousands of years, its name immortalized in the Hebrew Bible and its lush upper reaches once known as the gates to the Garden of Eden. This summer, however, large sections of this storied river were reduced to a trickle, the water so low that grass fires spread freely across the Jordan Valley between Israel and Jordan. Steadily drained over the past half century to quench the thirst and grow the crops of the people of Israel, Jordan, Syria, and the Palestinian territories, the Jordan River has been dealt a deathblow recently by a severe drought and by yet another tributary dam, this one on the Jordanian-Syrian border.

In recent years, all that saved much of the lower Jordan from becoming a desiccated channel has been the agricultural runoff, raw human sewage, diverted saline spring water, and contaminated wastes from fish farms that have been pumped into it. But now even that effluent barely restores a flow to the Jordan, the river where Jesus Christ was baptized and which has long been a vital stopover on the migratory pathway of tens of millions of birds en route between Europe and Africa.

The degradation highlights the failure of the governments of Israel, Jordan, and Syria to take serious steps to rescue a 205-mile river that has deep meaning for Christianity, Judaism, and Islam. Although these governments have paid lip service to bringing the Jordan back to life, they have in fact encouraged water withdrawals — mainly for irrigated agriculture — that have led to its near-disappearance. This ecological catastrophe has been overshadowed by decades of war and regional conflict. Indeed, for the past 60 years, much of the river — a fenced and mined border zone between Israel and Jordan — has been off-limits, enabling its draining to take place out of sight and out of mind.

The governments of the region have blamed the conflict for their lack of action, but as the citizens’ group I help run — EcoPeace/Friends of the Earth Middle East — has shown, international cooperation to resuscitate the Jordan is possible. Working with local communities, my Jordanian, Palestinian, and Israeli colleagues are striving to restore water to the river. The goal of our group — the region’s only multinational organization — is to become a catalyst for comprehensive water policy reform. We are aided by an unexpected phenomenon: In a region where people often feel helpless after years of turmoil, our efforts at environmental peacemaking offer an opportunity for constructive action, dialogue, and cooperation.

The story of the depletion of the Jordan is hardly unique. Around the world, human activity has pulled so much water out of great rivers — the Indus on the Indian subcontinent, the Yellow in China, the Rio Grande along the U.S.-Mexico border — that they now either disappear before reaching the sea or contain long sections that seasonally run dry. The underlying reason is always the same: We view rivers not as valuable in themselves, supplying vital “ecosystem services” to people, fish, animals, and plants, but rather as merely tools for humans and economic development.

That was certainly the case in the early days of the formation of Israel, when the dream of nation building was to “make the desert bloom.” In the 1950s, that dream was married to advanced engineering as Israel’s National Water Carrier diverted about a third of the original flow of the Jordan to Tel Aviv and the farms of the Negev Desert. Subsequent Israeli water withdrawals, coupled with scores of dam and canal projects on tributaries in Syria and Jordan, claimed the rest of the river’s water. For ages, the Sea of Galilee has fed the longest stretch of the river, the lower Jordan, but today not a drop of fresh water flows out of the sea into the river. The largest tributary to the lower Jordan, the Yarmouk River, has similarly had all its waters diverted by Syria and Jordan. As these insults to the Jordan have accumulated, water disputes in this rain-starved region have grown ever more contentious, with unequal water allocations — coupled with violence and occupation —becoming a powerful human rights issue and an additional source of animosity. 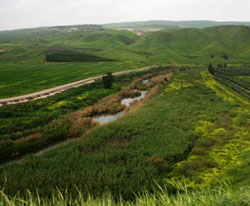 Massive water withdrawals for irrigation have created lush areas in the Jordan valley but have reduced the river to a trickle in many spots. GIDON BROMBERG

Just as the Jordan is hitting bottom, another troubling development is unfolding. The World Bank has selected two consulting firms to study the feasibility of pumping water from the Red Sea to the Dead Sea, the terminus of the Jordan River, via a massive and staggeringly expensive pipeline. Because of the Jordan’s catastrophic reduction in flows — from a historic level of 1.3 billion cubic meters annually to only about 70,000 cubic meters now — the surface area of the Dead Sea has shrunk by a third in the past 50 years and the level of the sea, the world’s lowest point, is dropping by a meter a year. Rather than tackling the root problem destroying the river and draining the Dead Sea — which would require restoring flows to the Jordan — the World Bank, supported by Jordan, Israel, and the Palestinian Authority, is throwing its weight behind a huge public works project that could easily cost $5 billion to $10 billion and will likely have damaging ecological consequences.

The so-called Red-Dead project would be rendered obsolete if nations bordering the Jordan would begin putting water back into the river. But with regional governments taking little action, Friends of the Earth Middle East has stepped in to push for measures that will gradually return water to the Jordan. Our approach is two-pronged: The first is a program called Good Water Neighbors, in which we work with nine river communities — four Jordanian, three Israeli, and two Palestinian, all located on opposite banks — to conserve water and educate people about the value of the Jordan and its wetlands. The second, and more challenging, task is to persuade national leaders to make the tough choices that will revitalize the Jordan: charging more for water, removing large subsidies to agricultural water users, and adopting large-scale conservation programs.

Our group has made progress because we are a grassroots, multi-national effort with Jordanian, Israeli and Palestinian staff members working inside their own communities while simultaneously reaching out to nationalities across the river. One of our core beliefs is that the region will never achieve a lasting peace until we begin talking directly to each other. Tackling a crucial environmental challenge that affects us all is a good start.

In each community, a staff person from Friends of the Earth Middle East, who is a local resident, has pushed an ambitious agenda with adults and youth. The teams have begun water conservation and rainwater harvesting programs in schools and other buildings. They have publicized the plight of the river and have gathered 15,000 signatures on petitions that were presented to elected officials. They have persuaded Israeli, Palestinian, and Jordanian mayors from both banks to sign memoranda of understanding, committing themselves to help bring the river back to life. Recently, members of the different communities have been visiting each other to see their towns and water conservation programs.

Last year, officials in Jordan and Israel agreed to create a Peace Park at the confluence of the Jordan and Yarmouk rivers that will include a bird sanctuary, eco-lodges, a visitor’s center, and nature and heritage trails. And given the river’s importance in religious history, we’re enlisting representatives of the Muslim, Christian, and Jewish faiths in the campaign. Rehabilitating the Jordan has become much more than an environmental crusade; it’s now an international project backed by school children, community leaders, and scientists.

These are small steps, but set against the backdrop of widespread hostility — and the absence of similar regional initiatives — our programs take on greater meaning. What is needed now is action from the Israeli and Jordanian governments, hopefully to be joined in the near future by Syria. They could start by creating an international commission to manage the Jordan, similar to the commissions that govern North America’s Great Lakes and Europe’s Rhine River. Regional governments and international donor states, including the U.S., also need to take a hard look at the proposed Red Sea-Dead Sea canal, a potential boondoggle that could cause major problems, including mixing the marine water of the Red Sea with the fresh water of the Dead Sea, which could change the composition of the Dead Sea and cause algal blooms. The wiser, and far cheaper, alternative is to revive the Dead Sea by restoring its main source of water — the Jordan River.

For decades now, conflict and human arrogance have been responsible for the demise of the Jordan. Cooperation in search of peace and sustainability is the only hope to restore it to health.