With a single, concerted initiative, says Lakshman Guruswami, the world could save millions of people in poor nations from respiratory ailments and early death, while dealing a big blow to global warming — and all at a surprisingly small cost.

“If we could supply cheap, clean-burning cook stoves to the large portion of the world that burns biomass,” says Guruswami, a Sri Lankan-born professor of international law at the University of Colorado, “we could address a significant international public health problem, and at the same stroke cut a major source of warming.”

Sooty, indoor air pollution from open wood or other biomass fires has long been linked to health problems and deaths. More recently, scientists have been surprised to learn that black carbon — not only from biomass fires but from dirty diesel engines and other sources — is a far larger contributor to global warming than previously suspected: The dark particles absorb and retain heat close to the Earth’s surface that might otherwise be reflected. 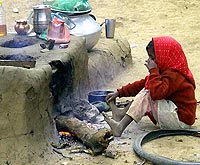 Some two billion people around the world, Guruswami notes, do most or all of their cooking and heating with fires from simple biomass — dried dung, wood, brush, or crop residues. In India alone, the ratio is much higher — about three-fourths.

“Think about that,” says Guruswami, who directs his university’s Center for Energy and Environmental Security. “Two billion people, one-third of the people on Earth, are caught in a time warp, with no access to modern energy. They got energy from Prometheus a long time ago, and that was it.”

Public health scientists have been pointing out for years that open fires and primitive stoves for cooking and heating used in much of the developing world pose profound health risks, particularly among women and children. Women typically spend hours cooking multiple meals beside smoky fires and stoves, with infants and small children in close proximity.

The public health implications alone are profound: 1.5 million lives are lost to respiratory, heart and other soot-related harm every year, according to World Health Organization estimates.

As for the climate aspects, atmospheric scientists have more recently reported that ordinary soot — or black carbon — plays a surprisingly large role in global and regional warming. Some scientists now estimate that small, solid particles of black carbon are responsible for about one-fifth of warming globally and, as such, are the second-largest contributor to climate change, after carbon dioxide gas.

In addition to soaking up heat in the atmosphere, the tiny, dark particles — or aerosols — are blown poleward or up mountains, where they settle on snow and ice and absorb warmth. Although dirty diesel engines, power plants and other more advanced technologies produce black carbon, cooking fires appear to be the largest source of soot in developing nations.

Some scientists now estimate that particles of black soot are responsible for about one-fifth of warming globally.

More alarming, extra warming driven by black carbon appears to be especially amplified in the high country of Asia’s Tibetan Plateau, home to the world’s highest mountains. There, in a region sometimes called the “Third Pole,” summer melt-water from thousands of glaciers forms the headwaters of major rivers that provide water to more than a billion people in teeming cities and small farms below, in India, China, and smaller nations like Burma and Vietnam. In fact, the plateau has been called “Asia’s water tower,” feeding the Ganges, the Indus, the Brahmaputra, the Mekong, the Yangtze, and the Yellow rivers.

Already, glaciers on the plateau have declined by about 20 percent since the 1960s. Scientists have predicted that with rising Asian populations and more open fires, diesel engines, and burning of forests, the glacial melt will accelerate, eventually diminishing the rivers below.

Beginning in 2007, scientists at the Scripps Institute of Oceanography helped establish just how profound warming boosted by black carbon might be in the Tibetan Plateau. While previous hints had come from computer models, Scripps scientists working in India measured soot levels and dispersion by flying three unmanned aircraft equipped with sensors across the region. Using this data, the Scripps team, headed by climatologist Veerabhadran Ramanathan, concluded that black carbon was probably contributing at least as much to the Tibetan Plateau’s glacial melt as were greenhouse gases. A separate study last month estimated that black carbon was responsible for at least 30 percent of glacial melt in the Himalayas.

Late last year, NASA reported that black carbon rises into the atmosphere, attaches to dust, and moves with warm-season air patterns to the Himalayan foothills. Heat from the sun warms this “brown cloud,” accelerating its typical monsoon season rise up the slope, essentially pumping heat up the mountains, according to William Lau, who heads research in atmospheric sciences at NASA’S Goddard Space Flight Center. 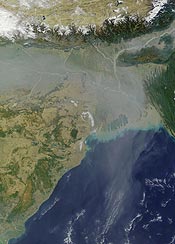 NASA
This NASA image shows brown haze over Northern India that scientists say is mostly caused by human activities, including the burning of biomass.

“Over areas of the Himalayas, the rate of warming is more than five times faster than warming globally,“ Lau said at a press briefing in December, noting that the heating problem is most dramatic in the western part of the Tibetan Plateau. “Based on the differences, it’s not difficult to conclude that greenhouse gases are not the sole agents of change in [this] region,” he added. “There’s a localized phenomenon at play.”

Enter the cook stove. A November 2009 study published in The Lancet, the British medical journal, estimated that a decade-long, all-out effort to equip about 90 percent of Indian households that burn biomass with clean-burning cook stoves by 2020 would reduce premature deaths by 17 percent annually, essentially saving 55.5 million years of human life.

But there’s a key reason the world’s poor have long cooked with biomass over sooty fires, often nothing more than a “three-stone fire” with dried dung or brush smoldering under a pot sitting on a triangle of stones: They couldn’t afford anything better.

The University of Colorado’s Guruswami says that to be workable for billions of people who might live on as little as one dollar a day, a better cook stove has to have three main attributes: It has to reduce soot, it has to be long-lived, and it has to be cheap — ideally $10 or less. The good news is that inventors and engineers have come up with various versions of efficient cook stoves, some of them both simple to use and inexpensive.

In the early 1980s, Oregon-based engineer Larry Winiarski developed what he called the Rocket Stove, designed for cleaner combustion and more heat using a fire that burns the tips of a long bunch of small wood sticks: To feed the fire as the tips burn away, a cook need only push the bundle in further. The Rocket stove is designed to take advantage of natural convection to burn its biomass more efficiently, and in fact uses about half as much wood as a primitive three-stone fire or simpler stove.

Fort Collins, Colo., home to a major university-based combustion laboratory, is a hotbed of cook-stove advocacy and dissemination.

The promise that improved cook stoves hold has triggered government action in India.

Envirofit, a nonprofit started by two engineering graduates of Colorado State University and two professors, has developed a modified, patent-pending Rocket stove that it claims is exceptionally durable. A problem with past designs is that metal combustion chambers tend to quickly fail due to high heat and caustic fumes. But Envirofit worked with Oak Ridge National Laboratory scientists to develop a combustion chamber made of metal alloys that give it an exceptionally long life — long enough, it says, that it can issue warranties on the chamber for five years.

The group works closely with Colorado State’s world-class Engines and Energy Conversion Lab to develop other combustion-chamber and stove efficiency features. The engineering focus, says Envirofit Vice President of Engineering Nathan Lorenz, has been to “control the geometry of the combustion chambers and heat transfer.” The more heat you transfer, the faster a pot heats up, the less fuel you burn.

About 100,000 Envirofit stoves have already been sold in India, at prices as low as 700 rupees, or about $15. The stoves quickly pay for themselves in fuel savings alone, allowing households to save $50 to $75 annually that would have been spent on wood or other biomass, even while using 60 percent less biomass and eliminating about 80 percent of soot.

Another Fort Collins-based nonprofit, called Trees, Water, and People, focuses on Central America, Mexico, and Haiti, where it promotes local construction of Rocket-type stoves. Working with local partners, the group says it has built more than 35,000 stoves.

In India, Scripp’s V. Ramanathan has helped pioneer a newer program that adds a layer of science. Dubbed Project Surya, this nascent effort is conducted in partnership with the United Nations Environment Programme. Its first community-wide experiment, launched last March in a village in Uttar Pradesh state, will provide cook stoves, along with solar lanterns (to replace sooty kerosene lamps), to every household that wants them. 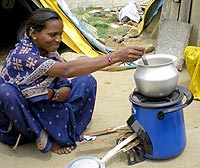 The unique feature: The project is designed to collect a wealth of data. A small sensor on the roof of the home of the village leader will provide the first accurate measurements of how much carbon is actually reduced in the local setting. Regional sensors and satellites will eventually help scientists learn more about more widespread pollution effects.

The Energy and Resources Institute in India also has launched a “Lighting a Billion Lives” campaign designed to replace soot-producing kerosene lamps and dung or wood fires with solar-powered lanterns. Begun in 2008, the campaign has so far supplied more than 6,000 solar lanterns to people in roughly 200 Indian villages.

Elsewhere, two of Europe’s largest industrial corporations, Phillips and Bosch, also have high-efficiency cook stoves in development. At Yale University, mechanical engineer Allesandro Gomez, director of the school’s Center for Combustion Studies, has begun to work on other designs.

But a conundrum remains. Researchers have found that it can be difficult to convince people to switch from traditional cooking methods to more advanced stoves, for a variety of reasons that range from uneasiness with unfamiliar or finicky technology, to upfront costs. Working with Yale development economist Ahmed Mushfiq Mobarak and a local NGO, a team of researchers at Stanford University has found that many households in Bangladesh simply do not regard the high-efficiency cook stoves as great improvements. The group found that even when offered completely free stoves, more than 30 percent of households refused the offer.

Envirofit’s Lorenz says some of those stoves are simply too cheaply made. That’s why his nonprofit focuses on charging at least minimally for its more durable products, and even paying attention to product aesthetics. “People would rather be treated like customers than victims,” he says.

In India, the promise of improved cook stoves and reduced black carbon have triggered high-level government action recently. In December, New and Renewable Energy Minister Farooq Abdullah announced a new “National Biomass Cook-stoves Initiative.” Given that the world’s wealthiest nations are overwhelmingly responsible for planet-warming greenhouse gas emissions, it seems reasonable to suggest that these countries could launch micro-lending programs to underwrite the widespread adoption of clean stoves.

India and the world have at least one good reason to move quickly to reduce black carbon: Compared to greenhouse gas reductions, slashing black carbon offers a much quicker and cheaper fix. While climate-altering carbon dioxide can remain in the atmosphere for many decades, solid soot generally falls from the sky in days or weeks.

“It’s a faster fix, and when you think about the humongous cost of fixing even one power plant to reduce carbon dioxide, it’s really cheap,” says Guruswami. “This is what economists like to call low-lying fruit. Let’s find a way pick it.”