Above a Whole Foods Market, A Greenhouse Grows in Brooklyn

By the end of this year, a neighborhood in Brooklyn, New York, will witness the completion of a cutting-edge partnership in urban agriculture and retail — a 20,000-square-foot rooftop greenhouse built on a Whole Foods 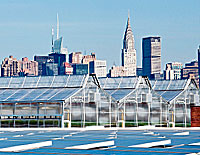 Gotham Greens
Gotham Greens’ existing greenhouse in Brooklyn.
supermarket. Atop this newly constructed store in Gowanus, Brooklyn, Gotham Greens, a New York company that grows greenhouse vegetables, plans to grow leafy vegetables and tomatoes, which will be sold at the store below and at other Whole Food markets. Scheduled for completion in December, Gotham Greens says the new facility will be capable of producing 150 tons of produce each year, a significant increase over the capacity of the company’s existing 100-ton-per-year solar-powered rooftop greenhouse in nearby Greenpoint, Brooklyn.
Read more.