Germany tops a new energy efficiency ranking of the world’s major economies, followed by Italy, China, France, and Japan, according to the American Council 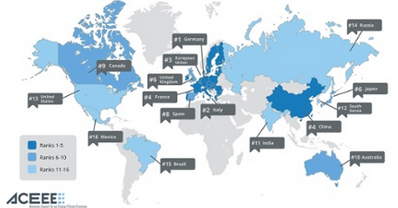 Energy-efficiency rankings
for an Energy-Efficient Economy (ACEEE). The United States ranked 13th out of 16 nations, behind countries such as India, China, and Canada, although new carbon pollution standards proposed this June for existing power plants would be a major stride in the right direction, the ACEEE said. The group also admonished Australia, which ranked 10th, for demonstrating “a clear backward trend” in adopting energy efficiency measures. Germany took the top spot largely due to regulations it has imposed on commercial and residential buildings. And China, despite lax enforcement of building codes, uses less energy per square foot than any other country, the analysis found.