A group of southern elephant seals is helping scientists monitor how climate change is impacting Antarctica by tracking water temperature, depth, and salinity as they swim and dive around the frozen continent. 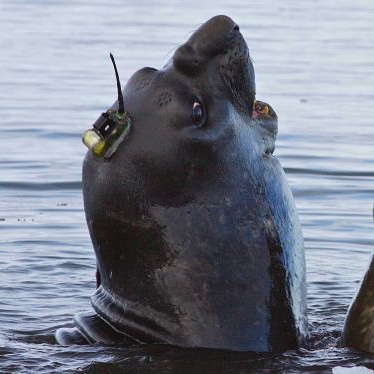 An elephant seal wearing a data tracker.
Most recently, data from the seals — which routinely dive to depths of 1,000 to 2,000 feet — showed that water melting off the Antarctic ice sheet is causing the surrounding seas to become less salty, disrupting a conveyor belt-like system that transfers heat and nutrients around the globe. The new findings were published this week in the journal Nature Communications. The elephant seal data, as well as records from monitoring devices on other marine mammals, have generated more than 500,000 vertical profiles of temperature and salinity in the world’s oceans and helped inform nearly 100 scientific studies. “”At the moment it’s all about filling gaps” in the environmental records, lead author Guy Williams of the University of Tasmania told the Australian Broadcasting Corporation. “The [seals] have gone to areas where we’ve never had an observation before.”