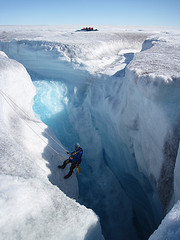 Meltwater from Russell Glacier
with the overall warming of the Earth, a new study says. Still, at least half the warming remains attributable to rising global carbon dioxide emissions, according to research published in the journal Nature. Climate data and advanced computer models show that changes in the western tropical Pacific Ocean, which has been about 0.3 degrees warmer than normal, have caused shifts in atmospheric pressure over the North Atlantic. Those changes set off a stationary wave in the atmosphere that arcs in a great circle from the tropical Pacific toward Greenland, pulling warmer air over that massive island. “Along this wave train there are warm spots where the air has been pushed down, and cold spots where the air has been pulled up,” one author explained. “And Greenland is in one of the warm spots.”