A pair of satellite images released by NASA this week shows the effects of a severe drought on New Mexico’s largest reservoir, where water levels are at their lowest 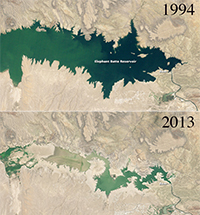 NASA
Elephant Butte reservoir, 1994-2013
levels in four decades. Earlier this week, the U.S. Army Corps of Engineers estimated that Elephant Butte reservoir in southern New Mexico was holding about 65,057 acre-feet of water, only 3 percent of its capacity of 2.2 million acre-feet, largely as a result of prolonged drought conditions and unusually low spring snowmelt from nearby mountains. That represents the lowest water levels in the reservoir since 1972. From the mid-1980s to 2000 the reservoir was nearly filled to capacity, as illustrated in a 1994 satellite image, top, released by NASA. The reservoir, fed by the Rio Grande, provides water for about 90,000 acres of agricultural land and about half the city of El Paso, Tex.