China has changed everything. After years of sulking about climate change, China is right now diplomatically and technologically 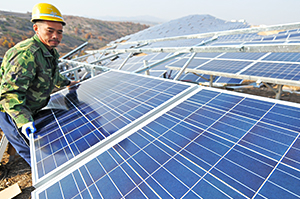 A worker installs solar panels in eastern China.
transforming the chances of slowing global warming. President Barack Obama might wish for a deal here at U.N. climate negotiations in Paris to be his own crowning legacy. But the truth is that this is China’s ball. Nobody personifies the transformation better than the head of the Chinese climate delegation for the past nine years, Xie Zhenhua. He spent years pretending climate change was a developing-world problem that the rich nations had to sort out, and he was widely blamed for scuppering the 2009 Copenhagen climate negotiations. But here in Paris he is quietly confident a deal is about to be done that will be in China’s and the world’s interests. “China is entering a new normal of energy and resource conservation,” he said. “We can seek a different way [through] ecologically driven wealth generation.”
Read more.