Is Paris the beginning of the end for coal? Coal burning is declining fast in both of the world’s two largest carbon dioxide emitters, 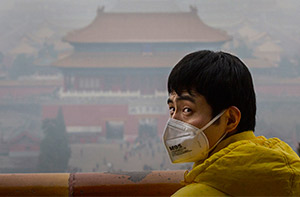 China’s air pollution is pushing it away from coal.
China and the U.S., with resulting declines in emissions for both countries. The fuel looks incompatible with a world that warms by no more than two degrees C, bringing calls for its rapid phaseout as the global economy is “decarbonized.” But, with or without a deal in Paris later this week, will the calls be heeded? Has the demise of King Coal been greatly exaggerated? The smart money in Paris is betting that, despite the embrace of coal by some developing countries such as India and Turkey, the dirty fossil fuel’s days are numbered. “The inevitable conclusion we can draw on the future of global thermal coal is that it has none,” an energy analyst said in Paris.
Read more.