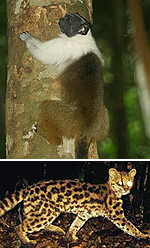 A. Antunes & Tofoli/Rohe
A pied tamarin (top), and a margay
Researchers say they have recorded evidence that wild cats in the Amazon intentionally mimic the calls of their prey to lure them within striking distance. While there have long been anecdotal observations of cats such as jaguars and pumas imitating the calls of primates and agoutis, researchers from the Wildlife Conservation Society and the Federal University of Amazonas (UFAM) witnessed an incident in the forests of Brazilian Amazon in which a margay, a spotted cat native to Central and South America, emitted calls similar to those made by the small, squirrel-sized monkey known as a pied tamarin. While a “sentinel” tamarin heralded a warning signal to other monkeys, a group of confounded tamarins chose to investigate rather than flee until the wild cat emerged from the foliage and moved toward them. While all of the monkeys escaped, researchers said the incident provides insights into the wild cat’s sophisticated hunting strategies. “Cats are known for their physical agility, but this vocal manipulation of prey species indicates a psychological cunning that merits further study,” said WCS researcher Fabio Rohe. The observations were published in the journal Neotropical Primates.